The sun rises behind the full-scale model of NASA's James Webb Space Telescope, as it sits at the Maryland Science Center in Baltimore's Inner Harbor. (Photo: NASA/Ed Campion)

Built in part with UA know-how, the prime camera of the James Webb Space Telescope is being mounted into the nascent telescope structure to begin testing for the conditions of space.
Feb. 3, 2014
Resources for the Media 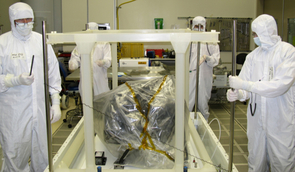 NIRCam being readied for shipment to Goddard Space Flight Center. (Photo: Lockheed Martin)
NIRCam is being lowered into a stand where it will rest until it gets mounted in the telescope structure. (Photo: NASA/GSFC) 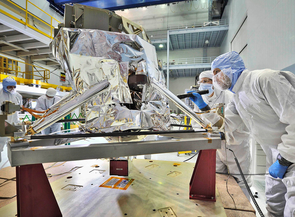 Contamination control engineers conducted a "receiving inspection" of the James Webb Space Telescope's Mid-Infrared Instrument (or MIRI) in the giant clean room at NASA's Goddard Space Flight Center in Greenbelt, Md. As part of the standard receiving inspection, they are looking for the tiniest traces of dust or contamination, which would have to be remedied because cleanliness is a priority for such a sensitive instrument. (Photo: NASA/Chris Gunn)

An infrared camera designed with University of Arizona know-how has joined three other instruments at NASA's Goddard Space Flight Center. Together, they form NASA's James Webb Space Telescope, which will peer farther into the universe's history than any telescope to date.

The arrival at Goddard and the "marriage" of all of JWST's science instruments was celebrated Monday with a special event including NASA Administrator Charles Bolden and U.S. Sen. Barbara Mikulski of Maryland.

At $400 million, NIRCam – which stands for Near Infrared Camera – is one of the largest sponsored research projects ever completed at the UA. The instrument will function as the central imaging component of JWST, which will replace the Hubble Space Telescope toward the end of this decade. Designated one of the space agency's three highest mission priorities, the Webb telescope is a joint project of NASA, the European Space Agency and the Canadian Space Agency.

NIRCam was designed, built and tested by a UA team and the Lockheed Martin Space Systems Advanced Technology Center in Palo Alto, Calif., and uses advanced infrared detector arrays from Teledyne Imaging Systems. The project is under the leadership of Principal Investigator Marcia Rieke, who is a Regents' Professor at the UA Department of Astronomy and Steward Observatory.

NIRCam's delivery to Goddard Space Flight Center marks the first time all of James Webb's instruments have come together. "We are excited that NIRCam is about to be integrated with the Webb telescope hardware," said Jeff Vanden Beukel, Lockheed NIRCam program director. "Next, it and the other instruments will be tested to prove their ability to function as a unit."

"Completing all of the instruments is one of the most daunting milestones for a large science mission," said George Rieke, husband of Marcia Rieke and a Regents' Professor in the UA's astronomy and planetary sciences departments. "Reaching this milestone keeps the telescope on schedule for launch in late 2018."

As JWST's prime camera, NIRCam will make it the most powerful space telescope ever built, enabling it to peer deeper into space and further back in time than any other instrument before. With its 6.5-meter (21-foot) mirror, JWST will explore the most distant objects in the universe.

The instrument operates out to wavelengths about 10 times longer than visible light to search for the first galaxies that formed in the universe. Because of the cosmic redshift, the further a galaxy is from Earth, the faster it moves away from us, stretching its light toward longer, "redder" wavelengths – into the infrared light spectrum where NIRCam will survey for candidates.

"The other instruments on JWST can then probe these objects in detail to test if we are really catching them when they were so young," Marcia Rieke explained. "The instrument can also peer through the clouds of gas and dust that hide the first stages when stars and planets are born and will provide insights to how planetary systems around distant stars form and evolve."

"NIRCam embodies many cutting-edge technologies, such as the infrared detector arrays themselves, a complex optical system based on lenses rather than the mirrors used in most infrared instruments, and devices to measure the optical performance of the JWST telescope and allow adjustments to keep it operating correctly."

George Rieke heads the science team overseeing another JWST instrument, MIRI, or Mid-Infrared Imager, which was built in a collaboration among 10 European nations, led by Gillian Wright of the United Kingdom Advanced Technology Center, and NASA (through the Jet Propulsion Laboratory).

Delivered to Goddard Space Flight Center in 2012, MIRI has now been mounted in the JWST instrument module and recently operated flawlessly in the first round of low-temperature testing under environmental conditions mimicking those found in deep space, where JWST will be operating.

"MIRI extends the wavelength range of JWST to 28 microns, about 50 times redder than visible light and in the range where planets outside our solar system, very young stars and star-forming galaxies are bright," said George Rieke.

Buell T. Jannuzi, director of the UA's Department of Astronomy and Steward Observatory, said: “NIRCam is an outstanding example of the transformational technology that can be produced through the successful partnership of NASA, industry and research universities. I am extremely proud of the central role Professor Marcia Rieke’s team and the University of Arizona have played in this partnership."