Combining pest-resistant cotton with the controlled release of sterile pink bollworm moths, a UA-led initiative has virtually rid Arizona of one the world’s most damaging cotton pests.
Daniel Stolte
,
University Communications
Nov. 8, 2010
Resources for the Media 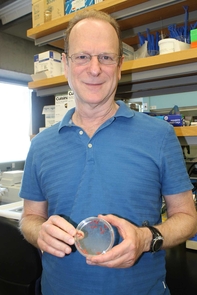 Using pests as part of an insect birth control program helps to get rid of them, University of Arizona researchers have found.

The new approach that combines the planting of pest-resistant cotton and releasing large numbers of sterile moths has virtually eliminated one of the world's most destructive cotton pests from Arizona fields.

"We are running the pesticide treadmill in reverse," said Bruce Tabashnik, department head of entomology in the UA's College of Agriculture and Life Sciences. "Our new approach has resulted in huge environmental gains. We are using cutting-edge technology to create sustainable cotton farming practices."

The new approach is part of a multi-pronged team effort to eradicate pink bollworm from the Southwestern U.S. and Mexico, in which Tabashnik and his co-authors play a leading role.

Caterpillars of the pink bollworm (Pectinophora gossypiella) are one of the most detrimental pests to cotton production worldwide. First detected in the U.S. in 1917, this invasive insect species wreaked havoc on Arizona's cotton-growing industry, with larvae infesting as many as every other cotton boll (the fruit capsule containing the valuable fibers).

A breakthrough came in 1996 with the introduction of Bt cotton, a genetically engineered crop containing a gene transferred from the bacterium, Bacillus thuringensis, endowing the plants with a protein that kills some, but not all insects. Unlike typical broad-spectrum insecticides, which kill most insects, pests or not, the Bt toxin only targets certain insect species. Pink bollworm caterpillars munching on Bt cotton die before becoming adults and therefore do not reproduce.

Bt crops have allowed farmers to cut back on spraying, but, much like antibiotics, have suffered from pests evolving resistance to the toxins, sometimes very rapidly. In fact, Tabashnik was the first to discover and document a case of a moth – not pink bollworm – evolving resistance to Bt toxins in crop fields.

"The most widely used strategy to delay resistance is to set aside refuges – patches with regular, non-Bt cotton where the pest can feed without ingesting the Bt toxin."

"If you plant Bt crops with no refuges, the vast majority of the caterpillars will die, but a tiny fraction will be resistant. These rare resistant survivors will emerge as adults and mate with each other."

The result is obvious: an exploding population of resistant insects.

While the refuge concept has worked reasonably well at keeping the pests at bay, it is incompatible with eradication, Tabashnik pointed out.

"Refuges are a way of managing pest populations, so you have to accept the permanent presence of the pest," he said. "You don't get rid of them. You maintain susceptibility by promoting survival of the susceptible insects."

So, rather than relying on susceptible moths from refuges to thwart resistance, the eradication program staff reared large numbers of pink bollworms, sterilized them, and released the sterile moths into cotton fields where they could block reproduction of the wild insects.

The release of sterile insects to control pests is not new. But this is the first time the sterile insect technique has been used in concert with a Bt crop.

"Let's say you have 1 million pests per field in non-Bt cotton fields. There is no way you could release 1 billion sterile insects per field per week."

But in combination with planting Bt cotton, the strategy turned out to be extremely powerful, Tabashnik's group discovered since tests started in 2006. Tabashnik explained: "On the Bt cotton, pink bollworm survival is virtually zero. This makes it much easier to overwhelm the wild population."

In addition to promising sustained, long term pest control without spraying insecticides for pink bollworm, the new strategy frees up acreage that otherwise would have to be set aside for refuges, thereby avoiding yield losses.

Since the eradication program began in Arizona in 2006, pink bollworm populations have declined dramatically. In 2009, only two pink bollworm larvae were found in 16,600 bolls of non-Bt cotton screened across the state. From 2005 to 2009, the pink bollworm infestation rate dropped by 99.9 percent.

Along with the decline, insecticide sprays fell to historic lows. Whereas Arizona cotton growers lost $18 million per year to pink bollworm management between 1990 and 1995, that cost plummeted to an average of $172,000 per year between 2006 and 2009.

Compared with 1995, Arizona growers' insecticide use against all cotton pests, including those not killed by Bt cotton, decreased by 88 percent, saving $200 million between 1996 and 2009.

To test the idea of delaying resistance with sterile insect releases, the researchers conducted computer simulations and analyzed more than a decade of field data from before and after deployment of this strategy statewide in Arizona.

The eradication program and associated research is a partnership among the growers, their organizations, the USDA and the UA, including Peter Ellsworth of the UA's Cooperative Extension Service.

"This has been a team effort from the get-go, with the growers essentially 100 percent on board," Tabashnik pointed out. "You can tell by the long list of authors – this wouldn't have happened without teamwork."