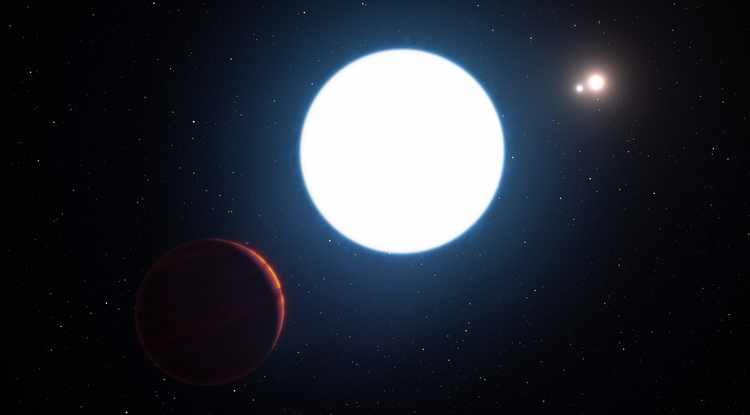 A first-year Ph.D. student in the UA's Department of Astronomy has discovered a planet in a unique position amid three stars.
Daniel Stolte
,
University Relations, Communications
July 6, 2016
Resources for the Media
Extra Info:

Curious about how UA researchers search for other Earths? Learn more about our Earths in Other Solar Systems program. 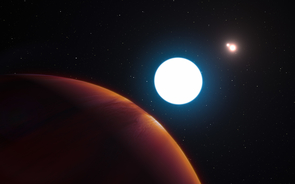 Triple sunrise: This artist's impression shows a view of the triple star system HD 131399 from close to the giant planet orbiting in the system. (Credit: ESO/L. Calçada) 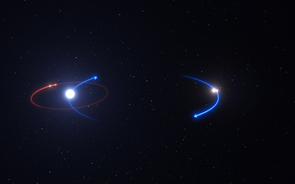 This graphic shows the orbit of the planet in the HD 131399 system (red line) and the orbits of the stars (blue lines). (Credit: ESO) 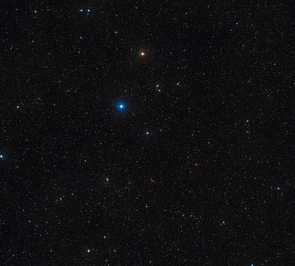 This wide-field image shows a piece of the constellation of Centaurus (The Centaur) centered on the position of the triple star HD 131399. It was created from images from the Digitized Sky Survey 2. HD 131399 itself appears as a star of moderate brightness exactly at the center of the picture. (Credit: ESO/Digitized Sky Survey 2)
Kevin Wagner 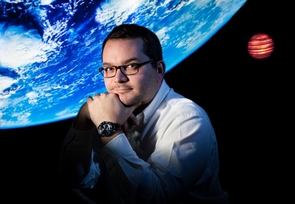 If you thought Luke Skywalker's home planet, Tatooine, was a strange world with its two suns in the sky, imagine this: a planet where you'd either experience constant daylight or enjoy triple sunrises and sunsets each day, depending on the seasons, which happen to last longer than human lifetimes.

Such a world has been discovered by a team of astronomers led by the University of Arizona in Tucson, Arizona, using direct imaging. The planet, HD 131399Ab, is unlike any other known world - on by far the widest known orbit within a multi-star system. The discovery is published online by the journal Science.

Located about 340 light years from Earth in the constellation Centaurus, HD 131399Ab is believed to be about 16 million years old, making it one of the youngest exoplanets discovered to date, and one of very few directly imaged planets. With a temperature of 850 Kelvin (about 1,070 degrees Fahrenheit or 580 degrees Celsius) and weighing in at an estimated four Jupiter masses, it is also one of the coldest and least massive directly imaged exoplanets.

"HD 131399Ab is one of the few exoplanets that have been directly imaged, and it's the first one in such an interesting dynamical configuration," said Daniel Apai, an assistant professor of Astronomy and Planetary Sciences who leads a research group dedicated to finding and observing exoplanets at the UA.

"For about half of the planet's orbit, which lasts 550 Earth-years, three stars are visible in the sky, the fainter two always much closer together, and changing in apparent separation from the brightest star throughout the year," said Kevin Wagner, a first-year PhD student in Apai's research group and the paper's first author, who discovered HD 131399Ab. "For much of the planet's year the stars appear close together, giving it a familiar night-side and day-side with a unique triple-sunset and sunrise each day. As the planet orbits and the stars grow further apart each day, they reach a point where the setting of one coincides with the rising of the other - at which point the planet is in near-constant daytime for about one-quarter of its orbit, or roughly 140 Earth-years."

Wagner identified the planet among hundreds of candidate planets and led the follow-up observations to verify its nature.

The planet marks the first discovery of an exoplanet made with SPHERE, one of the world's most advanced instruments dedicated to finding planets around other stars. SPHERE, which stands for the Spectro-Polarimetric High-Contrast Exoplanet Research Instrument, is sensitive to infrared light, making it capable to detect the heat signatures of young planets, along with sophisticated features correcting for atmospheric disturbances and blocking out the otherwise blinding light of their host stars. The instrument is part of the Very Large Telescope operated by the European Southern Observatory on Cerro Paranal in the Atacama Desert of northern Chile.

Although repeated and long-term observations will be needed to precisely determine the planet's trajectory among its host stars, observations and simulations seem to suggest the following scenario: At the center of the system lies a star estimated to be eighty percent more massive than the sun and dubbed HD 131399A, which itself is orbited by the two remaining stars, B and C, at about three-hundred AU (one AU, or astronomical unit, equals the average distance between the earth and the sun). All the while, B and C twirl around each other like a spinning dumbbell, separated by a distance roughly equal to that between our sun and Saturn (see video below).

In this scenario, planet HD 131399Ab travels around the central star, A, in an orbit about twice as large as Pluto's if compared to our solar system, and brings the planet to about one-third of the separation of the stars themselves. The authors point out that a range of orbital scenarios is possible, and the verdict on long-term stability of the system will have to wait for planned follow-up observations that will better constrain the planet's orbit.

"If the planet was further away from the the most massive star in the system, it would be kicked out of the system," Apai explained. "Our computer simulations showed that this type of orbit can be stable, but if you change things around just a little bit, it can become unstable very quickly."

"It is not clear how this planet ended up on its wide orbit in this extreme system, and we can't say yet what this means for our broader understanding of the types of planetary systems out there, but it shows there is more variety out there than many would have deemed possible," Wagner said. "What we do know is that planets in multi-star systems are much less explored, and potentially just as numerous as planets in single-star systems."

The co-authors on the paper are: Markus Kasper and Melissa McClure of the European Southern Observatory in Garching, Germany; Kaitlin Kratter at the UA's Steward Observatory; Massimo Roberto at the Space Telescope Science Institute in Baltimore, Maryland; and Jean-Luc Beuzit with the Université Grenoble Alpes and the Centre National de la Recherche Scientifique, both in Grenoble, France.

Video: This artists impression shows the orbit of the planet in the triple-star system HD 131399. Two of the stars are close together and the third, brighter component is orbited by a gas giant planet named HD 131399Ab.