Noam Chomsky to Return to UA

Considered by some to be "the most important intellectual alive" and "the Elvis of academia," he will speak during this year's Tucson Festival of Books in mid-March.
Lori Harwood
,
UA College of Social and Behavioral Sciences
Feb. 24, 2015
Resources for the Media
Extra Info:

What:
"A Conversation With Noam Chomsky"
When:
4 p.m. March 15
Where:
Centennial Hall, UA campus 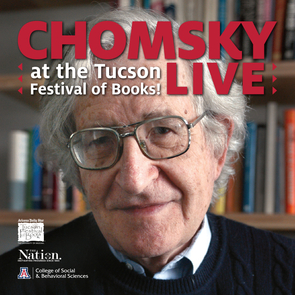 When Noam Chomsky spoke at the University of Arizona in 2012, the atmosphere inside Centennial Hall felt like a rock concert.

Chomsky fans, young and old, waited in line for hours for a chance to see him, and hundreds more were directed to overflow rooms to watch the lecture on big screens.

This year, the Tucson Festival of Books brings another opportunity to see Chomsky, a world-renowned linguist, intellectual and political activist.

The session is sponsored by the UA College of Social and Behavioral Sciences in cooperation with the Tucson Festival of Books and The Nation magazine. Chomsky is a longtime contributor to the magazine, which is helping sponsor his visit as part of its 150th anniversary celebration.

During the session, John Nichols, the Washington, D.C., correspondent for The Nation, will interview Chomsky on various topics. Attendees will be able to submit questions during the presentation by going online on any device with a Web browser. John Paul Jones III, dean of the College of Social and Behavioral Sciences, will introduce Nichols and Chomsky.

"We are excited to be partnering with the Tucson Festival of Books and The Nation magazine to bring Dr. Chomsky back to Tucson," Jones said. "This is a great opportunity for the College of Social and Behavioral Sciences to connect with the community by utilizing our academic network to bring one of the world’s preeminent thinkers and social activists to southern Arizona."

Chomsky, a professor emeritus in the Department of Linguistics and Philosophy at the Massachusetts Institute of Technology, is credited with revolutionizing the field of linguistics by introducing the Chomsky hierarchy, generative grammar and the concept of a universal grammar, which underlies all human speech and is based in the innate structure of the mind/brain. Beyond linguistics, his work has influenced fields such as cognitive science, philosophy, computer science, mathematics and psychology.

Now in his mid-80s, Chomsky continues traveling, lecturing, writing and grabbing headlines. According to The New York Times, he is "arguably the most important intellectual alive," as famous for his political involvement as for his linguistic prowess. He has spoken and written on U.S. foreign policy, Mideast politics and other subjects. His fame has extended into pop culture, leading fans such as rock star Bono of U2 to describe him as "the Elvis of academia."

Chomsky has written more than 100 books, his most recent being "Propaganda & the Public Mind," published this year, and "Masters of Mankind: Essays & Lectures, 1969-2013," published in 2014. He has received numerous awards, including the Kyoto Prize in Basic Sciences, the Helmholtz Medal, the Dorothy Eldridge Peacemaker Award and the Ben Franklin Medal in Computer and Cognitive Science.

While at the UA, Chomsky again will spend time with the faculty and students in the Department of Linguistics in the College of Social and Behavioral Sciences.

"We're thrilled, of course," said Simin Karimi, professor and head of the Department of Linguistics. "Many of the faculty, myself included, maintain professional relationships with Chomsky. And for our students, this is a once-in-a-lifetime opportunity to meet the man who is widely considered to be the father of modern linguistics."

Chomsky's connections to the UA are deep and long-standing, mostly stemming from the various sojourns of UA linguists at MIT, where Chomsky worked for more than 50 years.

"We have an unusually large number of people who were either Noam's students or departmental fellows," says Tom Bever, a Regents' Professor of Linguistics and Cognitive Science. "Indeed, the joke in the linguistics world is a that UA linguistics is MIT West."

Bever was one of the first graduate students in the linguistics program started at MIT by Chomsky and Morris Halle. Even though Bever and Chomsky have not collaborated directly since, they have enjoyed a collegial give-and-take over the years.

Massimo Piattelli-Palmarini, a UA professor of linguistics and cognitive science, met Chomsky in May 1974 when he organized a conference on biolinguistics — the first of its kind — with Chomsky and Salvador Luria, a giant of early molecular genetics and a Nobel laureate. Since then, they have worked together repeatedly, especially when Piattelli-Palmarini was stationed at MIT from 1985 to 1994, and then again in 2005.

"In the last 30 years or so, I cannot think of another author who has influenced my thinking, my writing and my teaching more than Chomsky," Piattelli-Palmarini said.

"I am a Chomskyan syntactician. The name says it all," said Carnie, dean of the UA's Graduate College. "The very paradigm I work in wouldn't exist if it weren't for Chomsky. He's not only reinvented the discipline once, he's done it multiple times."