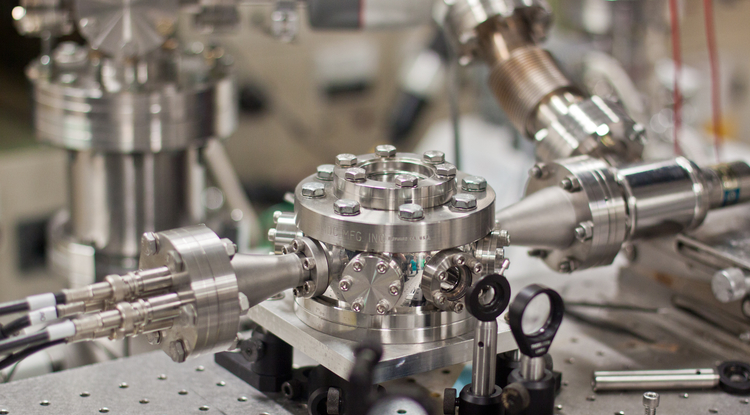 Observing Electrons in Real-Time Could Lead to Faster Computing

New research revealing the interactions between electrons and organic carrier materials in devices that use electron spin to encode information could help in the development of faster and more efficient data storage technology.
Daniel Stolte
,
University of Communications
March 22, 2013
Resources for the Media 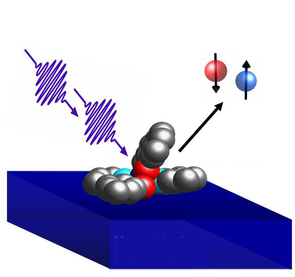 Depending on whether an electron has an "up" or "down" spin, the interaction between an organic molecule and a magnetic surface (blue) is different. This process, called spin-filtering, can be used to encode digital information.

By observing electrons in real-time over a few millionths of a billionth of a second, physicists have been able to demonstrate that organic molecules interact with the magnetic electrode in so-called spintronic devices, opening the possibility of manufacturing such data storage devices from cheaper, carbon-based materials instead of metals and silicon.

The drive toward more powerful, faster and smaller computer and telecommunication devices has kept scientists busy for quite a while, with considerable advances made over the last few years. For example, the rapid turn-on time of modern computers is made possible by the recent development of magnetic memory, or MRAM.
Traditional ways of accessing data quickly are based on the manipulation of electric charges, which works only while a computer is powered up. MRAMs on the other hand use magnetic storage elements, delivering high-speed, non-volatile memory.
By measuring electric currents in the presence of a magnetic field, data can be written as "0" or "1." All currently commercially available MRAMs are based on inorganic materials such as metals and silicon and take advantage of an effect called giant magnetoresistance, or GMR.
Oliver Monti, an associate professor in the University of Arizona department of chemistry and biochemistry and a co-author on this study, explained how GMR works: "Electrons have a unique property that we call spin. In a sense, they behave like tiny magnets that can have one of two orientations relative to a surrounding magnetic field: north pole up or north pole down."
When an electric current is applied, one orientation leads to high resistance – and thus small current – while the other lowers resistance, allowing for a larger current.
"Up or down ultimately translate into a 0 or a 1, giving each electron a digital identity that can be used to encode and store information," Monti said.
The science behind this technique, known as spintronics, recently has been applied to semiconductors made of organic molecules.
The advantages of organic semiconductors are overwhelming: They can be manufactured cheaply since they largely consist of carbon, which unlike inorganic semiconductors can be processed at relatively low temperatures. Moreover, organic materials are more malleable to the standard tools of chemical synthesis, and researchers can create lightweight and flexible thin film structures that can be integrated into a variety of different devices. First implementations of organic semiconductor-based spintronics elements have already been demonstrated in laboratory settings.
"Inorganic materials often require very low temperatures for operation, which makes them impractical for commercial applications," Monti explained. "Organic spintronics might relieve that issue."
While it is well understood how data bits of 0 and 1 can be achieved with traditional GMR devices, the critical question of how magnetic information is transferred between magnetic electrode and the organic material still poses a significant puzzle.
A collaboration between Monti and researchers in the group of Martin Aeschlimann at the University of Kaiserslautern in Germany has now made a significant step toward resolving this question. Using ultrafast, time-resolved measurements probing the interface between an organic semiconductor and a magnetic metal, the team was able to show how electrons magnetized in one particular direction remain trapped in the molecules for substantially longer times than those with opposite direction.
The results, measured by observing electrons in real-time over a few millionths of a billionth of a second, demonstrate that the molecules interact with the magnetic electrode in a spin-dependent way, Monti explained.
"This so-called spin-filter effect is ultimately responsible for the magnitude of the current and thus determines whether a 0 or a 1 is being read."
According to Monti, this understanding provides an avenue for the rational design of highly efficient organic spintronic devices. Efforts are now under way to make spintronic devices cheaper and more flexible by introducing a new class of materials, the so-called organics semiconductors. These materials are already used in light-emitting diodes to form the basis of the very bright, color-intense and power-saving screens of television sets and mobile devices.
The results of these studies were published in the scientific journal Nature Physics.
Topics:
Science and Technology
Share This
Related

Oliver Monti is currently on sabbatical in Germany but can be reached via email: monti@u.arizona.edu