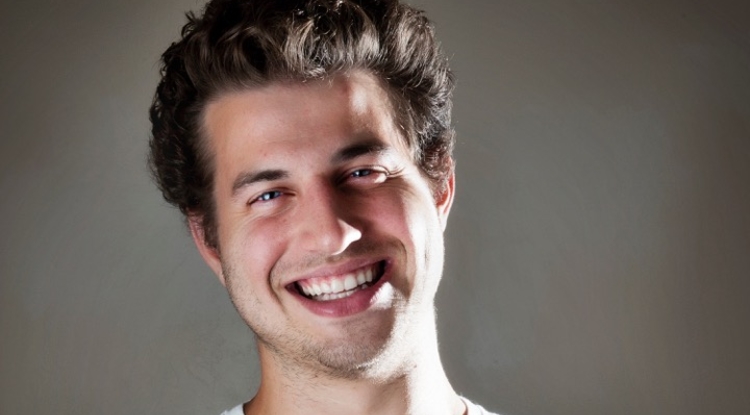 Alan Davis: "I was somewhere in the middle of Salt Lake City for a video shoot for the Special Olympics when I realized how much I loved the career I had chosen. I mean, I always liked elements of freelancing and I loved creating with the camera. Also, the business aspect of freelancing fascinated me. But, really, it wasn't until that night that I became a storyteller." (Photo: John de Dios)

Once New to Photography, UA Grad Is Freelance Ready

In this essay, alumnus Alan Davis writes about his UA experience and how it prepared him well for subsequent freelance work in video production.
Alan Davis
,
UA School of Journalism
Aug. 29, 2016
Resources for the Media
Extra Info:

Alan Davis was part of a group selected from around the world to work with some of Canon's professional visual storytellers. Check out the video that led to his selection to participate in a Canon master class held in New York, available online at https://www.youtube.com/watch?v=N8ZvZKn3njw. 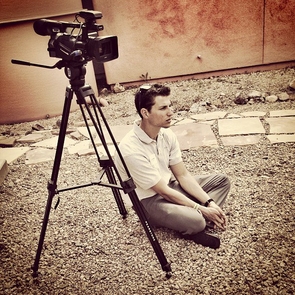 Alan Davis conducts a video interview at Biosphere 2 for his final project in Carol Schwalbe’s experimental science multimedia reporting class during the spring of 2013. The 400-level elective was Davis’ first journalism skills class at the University and it introduced him to video storytelling. (Photo: John de Dios) 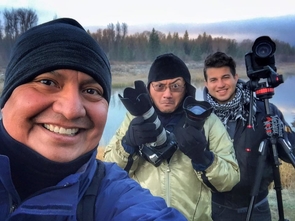 Not too shabby for someone who, just three years ago, had never really touched a camera.

This past summer, I was driving home to Tucson after spending a month off both traveling in California and helping my mom with her yard when I got a call from Canon Explorer of Light Bruce Dorn. Since the creation of the program in 1995, Canon's Explorers of Light have worked with Canon extensively as representatives, ambassadors, educators and role models for aspiring creative artists.

Dorn asked if I could be in Prescott, Arizona, the next day for a shoot. We had worked on a couple of projects before, including in New York City, where our mentor/mentee relationship began.

Having nothing in the barrel myself, I turned the car around and headed north. That same night, Dorn was fleshing out the details to me and the rest of our crew about how we were going to help him create a promotional video for the release of Canon's newest iteration of its warhorse camera: the EOS 5D Mark IV. I couldn't believe what I was hearing.

One minute, I'd be hanging out of a car trying to get a shot, and the next I'd be wading through creeks scouting out cool positions for the models. It was like a little boy's dream: to tramp through the woods with new friends and get paid for it. It was almost too good to be true.

However, the project did come with a lot of pressure.

Working for a project that big on a product that had so much vested into it isn't to be taken lightly. I would be lying if I said I wasn't nervous, which is bad news for any filmmaker. When you're filming, you want to be completely focused on the moment and the story you are creating. It's a rookie mistake to get caught up in pressure. Thank goodness for our wonderful crew.

Creating videos as a team is already a beautiful experience. The teamwork required draws everyone together, even if you don't particularly like everyone.

Thankfully, on this shoot that wasn't the case. All of the crew was funny, quirky and hard-working. By the end of the first day, we all ended up laughing poolside at a Sedona hotel. It was a perfect environment for being creative.

My introduction to photography and videography came while at the University of Arizona.

I transferred from Yavapai Community College to the UA, excited to start. I wanted to jump right into my field as a writer. Not having many of the required classes just yet, I found Carol Schwalbe's 400-level science multimedia reporting class in the School of Journalism. It was open to everyone.

I did not know how much it would change my life.

Professor Schwalbe, I would quickly learn, was an award-winning professor and former editor for National Geographic. The class was co-taught by Rogelio Garcia, a former TV journalist and documentarian. Because of them, I learned the basics of video production and became interested in multimedia. It was also in this class that I met John de Dios, a freelance photographer and a no-nonsense mentor.

I would take the skills I learned in and out of that class and work for Shipherd Reed at the Flandrau Science Center & Planetarium as a video editor before landing at the UA College of Agriculture and Life Sciences' Communications and Cyber Technologies team as a multimedia specialist. For almost three years, I worked under Cody Sheehy, a multimedia specialist and extremely talented cinematographer.

While at the UA, I became part of the team that put together the Emmy Award-winning documentary "Earthlight," and the now-nationally distributed PBS documentary "Beyond the Mirage." I also was able to produce mini-documentary stories for the local PBS affiliate, lead the media arm of the $50,000 grant dedicated to the "Global Rangelands" website and head the social media campaign for the "Beyond the Mirage" project.

I am humbled to be in the position that I am in today, and I couldn't be more grateful for the opportunities that the UA gave me.

Nowadays, you can find (half of) me leaning out of a car window, white-knuckling a heavy camera rig, trying my best to get a shot and not to drop said rig. On slower days, you'll find me at coffee shops in Tucson, listening to music and writing project proposals.

Since graduating in 2015, I have worked on video projects for National Geographic, General Tire, B&H PhotoVideo, the Special Olympics and various departments of the UA. Most recently, I've been helping Dorn with Canon projects.

It's an exciting time.

I feel that the sky is the limit for me, and I couldn't be happier to start my career in Tucson. Two of my best friends and I have begun talking about starting a media production company, and we are already working with clients.

If I were to say anything to young aspiring filmmakers, it would be to never second-guess yourself. Find mentors who can help foster your skills, break bad habits and encourage good ones. Most importantly, keep an open mind and listen to the universe — and you never will run out of opportunities.

UA alumnus Alan Davis is a freelancer who has lived in Tucson for the last three years and graduated from the UA in 2015 with a bachelor's degree in journalism.