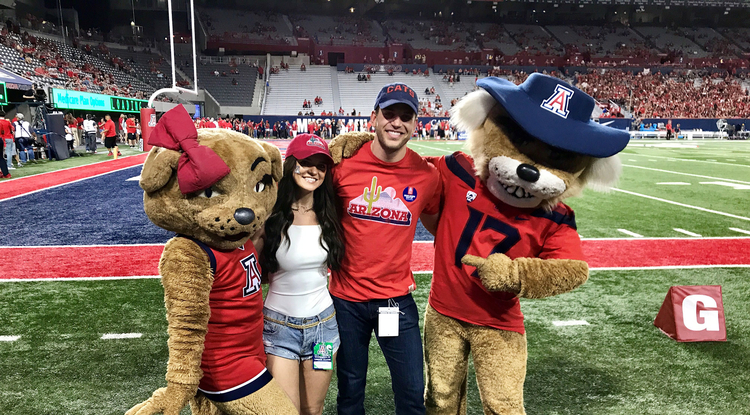 Adam Gottschalk and his girlfriend, Raven Gates, posed with Wilber and Wilma during a visit to Tucson for the UA's Homecoming festivities. (Courtesy of Adam Gottschalk)

From Paradise to Philanthropist: One Donor's Story

Adam Gottschalk played football for the UA, turned his degree into a successful real estate career and was one of television's most eligible bachelors. Now, the young alumnus is giving back to the university he says always supported him.
Cory Aaland
,
UA Foundation
Dec. 19, 2018
Resources for the Media 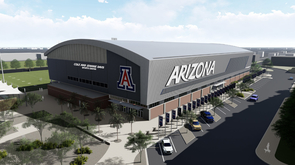 An artist's rendering shows what the Cole and Jeannie Davis Sports Center will look like when it is completed.

If you’re a fan of ABC’s "The Bachelorette" or a self-proclaimed member of Bachelor Nation, you may remember Adam Gottschalk from season 13. Or maybe you remember him from season 4 of "Bachelor in Paradise," where he began a relationship with Raven Gates. But at the University of Arizona, Adam is much more than a television personality – he’s a young, inspiring, alumnus philanthropist.

Gottschalk committed to a gift of $25,000 toward the completion of the UA’s new indoor practice center, a key strategic initiative for UA Athletics.

To Gottschalk, the gift is personal. In 2008, he secured a spot on the UA football team as a recruited walk-on. Two years later, his hard work earned him a full athletic scholarship.

He believes in hard work, mental preparation and always being "three steps ahead" in everything he does.

“My scholarship helped me out a lot when I was a student,” he said. “I always felt very supported at the UA, and this gift is my way of giving back and supporting others.”

As a member of the football team, Gottschalk played safety, accompanying the team during three bowl performances: the Las Vegas Bowl in 2008, the Holiday Bowl in 2009 and the Alamo Bowl in 2010.

Off the field, he studied real estate development and business management through the UA Eller College of Management. As a commercial real estate expert, he’s now putting that UA degree to good use. He is recognized as one of the youngest emerging commercial real estate agents in the nation and was named the “Top Power Broker” in Dallas Magazine’s 2015, 2016 and 2017 CEO Editions.

Gottschalk is an inspiring example of what young UA alumni can accomplish and how they can make a difference on campus. When completed, the indoor practice center will provide crucial practice space for multiple sports, primarily in the summer heat and during turbulent monsoon storms. It will also increase athlete safety and help recruit players who may be concerned about practicing in the heat.

In addition to his philanthropy, Gottschalk continues to stay connected to campus. He attended last year’s homecoming festivities, where he introduced Gates to the infectious Wildcat spirit. He also gives shout outs to the UA through his extremely popular social media channels – @adam_gottschalk on Instagram and @AdamJGottschalk on Twitter.