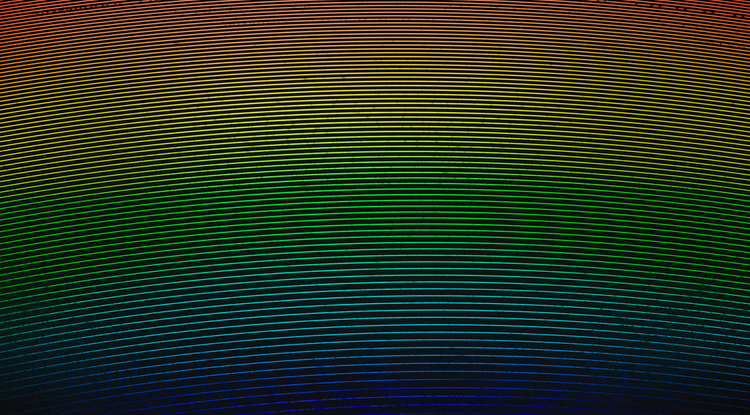 The new NEID instrument, designed to measure the motion of nearby stars with extreme precision, has obtained "first light" and is ready to embark on its quest to characterize exoplanets as small as Earth.
Daniel Stolte
,
University Communications, and National Optical-Infrared Astronomy Research Laboratory
Jan. 9, 2020
Resources for the Media
Extra Info:

The National Science Foundation's National Optical-Infrared Astronomy Research Laboratory, the U.S. center for ground-based optical-infrared astronomy, operates the international Gemini Observatory, Kitt Peak National Observatory, Cerro Tololo Inter-American Observatory, the Community Science and Data Center, and the Vera C. Rubin Observatory. It is managed by the Association of Universities for Research in Astronomy under a cooperative agreement with NSF and is headquartered in Tucson, Arizona.

NEID disperses starlight into a long spectrum arranged like the groove on a vinyl record. Small "skips" (gaps in the line) reveal the star's chemical fingerprint. Minute shifts in these patterns between exposures occur if the star wobbles from the tug of an unseen planet. (Image: Guðmundur Kári Stefánsson/Princeton University/Penn State/NSF’s National Optical-Infrared Astronomy Research Laboratory/KPNO/AURA) 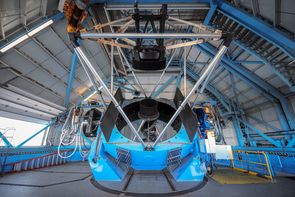 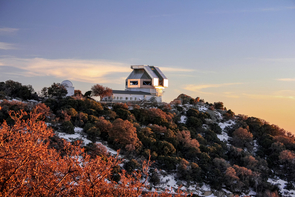 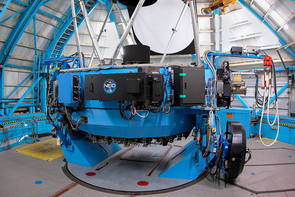 Perched atop Tohono O'odham Nation land in the Arizona-Sonoran Desert, exoplanet-hunting spectrograph NEID is embarking on a mission to discover planets with a similar mass to Earth's orbiting stars other than the sun. The announcement of first light was made at a Jan. 8 press conference at the 235th meeting of the American Astronomical Society in Honolulu, Hawai'i.

"First light is an important milestone in an instrument’s development," said Jason Wright, NEID project scientist at Penn State University. "It is the first verification that NEID is measuring starlight as expected and is on its way to full functionality."

Researchers at the University of Arizona are leading the commissioning of the instrument, which includes delivery, installation and integration into the observatory, taking test data, and demonstrating that it meets the technical and scientific requirements for operation. The university also serves as the hub for NEID's software pipeline, which translates subtle shifts in the spectrum of starlight into data that tell astronomers about any planets orbiting a star that would be impossible to observe directly.

NEID detects exoplanets by measuring the subtle effect these planets have on their parent stars. Planets tug gravitationally on the star they orbit, producing a small "wobble" – a periodic shift in the velocity of the star.

Thomas Beatty, assistant astronomer at the Steward Observatory and a member of the NEID science team, uses an analogy to illustrate the balancing game: "When I'm holding hands with my 2-year-old while she dances around me, I barely move back and forth because her mass is much smaller than mine. But if two toddlers dance the ring-around-the-rosy, they will move a lot."

The same holds true for celestial bodies like stars and their planets, including in our solar system: Jupiter causes the sun to move at roughly 29 miles per hour, whereas the Earth causes a sedate movement with a speed of only about 0.2 miles per hour. The size of the wobble is proportional to an orbiting planet’s mass, meaning NEID measurements can be used to determine the masses of exoplanets.

In a single night, NEID can observe between 50 and 100 stars. Through a complicated optical procedure, the light coming from each star is recorded and split into discrete wavelengths, resulting in what astronomers call a spectrum – a chemical signature of starlight that is unique to each star. If a star has planets, the resulting wobble causes the star to move around relative to Earth. Whenever it moves away or toward the Earth, its light spectrum shows characteristic shifts that are proportional to how fast the star moves.

"This curve repeats steady like a metronome for millions of years," explains Chad Bender, NEID's instrument scientist and an associate astronomer at Steward Observatory. "We take repeated snapshots of each star over five years, and at the end we can figure out what the period of the metronome is."

But first, the scientists have to translate vast amounts of spectral data into something they can analyze and interpret. This is accomplished through NEID's software hub at Steward Observatory.

"The software pipeline is where the sausage is made," says Bender, NEID's software lead. "It's a big effort for a ground-based project. We call it a pipeline because essentially, we feed raw data into it and it spits out velocities."

Current instruments can measure speeds as low as just over 2 miles per hour (a slow walking pace), but NEID was built to detect even lower speeds — potentially uncovering Earth-mass exoplanets. NEID is expected to reach 0.6 miles per hour, pushing the envelope to higher precision.

To allow NEID to make these measurements requires extreme precision and an equally extreme instrument. Starlight collected by the WIYN telescope is fed by an optical fiber to a purpose-built thermal enclosure encasing the NEID instrument. To ensure that NEID measurements remain stable over the instrument's five-year lifetime, its optics are held at a fixed temperature that is stable to within one one-thousandth of a degree.

"Because our spectrograph is quite large and all materials change their size in response to shifts in temperature, even small temperature changes can shift our light spectrum around," Bender explains. "To prevent that, NEID is stabilized to a milli-Kelvin, making it the most stable spectrograph in the world."

NEID’s capabilities are particularly impressive given how quickly the instrument went from the drawing board to first light.

"The short development time of NEID is remarkable," said Jayadev Rajagopal, WIYN telescope scientist and head of operations. "The NEID team has delivered a next-generation instrument in just 3 years and 9 months."

Already an impressive exoplanet-hunting machine, NEID becomes even more powerful in partnership with space observatories, such as the Transiting Exoplanet Survey Satellite, or TESS. According to Bender, the deluge of planet discoveries by TESS was one of the main drivers behind building the NEID instrument as fast as possible.

"You could say it's raining planets at this point, and we wanted to build a bucket so we can catch as many as possible."

Exoplanets discovered with NEID will help identify targets for follow-up observations with upcoming facilities like the NASA/ESA/CSA James Webb Space Telescope, which will be able to detect and characterize the atmospheres of transiting exoplanets. This makes NEID an important part of the ongoing search for other earths and takes us one step closer to determining if there are truly Earth-like planets elsewhere in the Milky Way.

The NEID instrument is funded by the joint NASA/NSF Exoplanet Exploration Program, NN-EXPLORE.