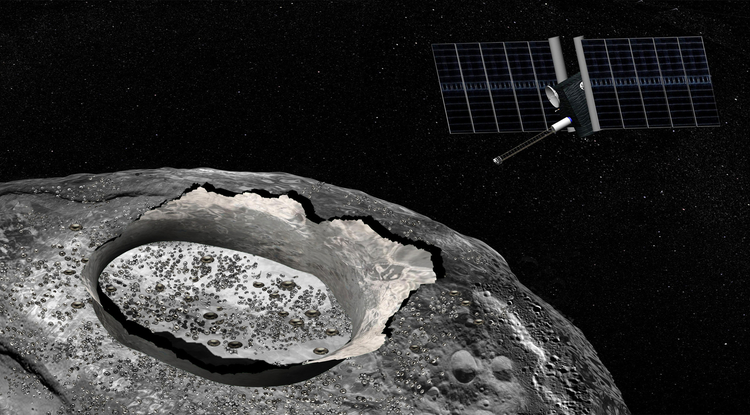 An artist’s concept of the Psyche spacecraft, a proposed mission for NASA’s Discovery program that would explore the huge metal Psyche asteroid from orbit (Credit: NASA/JPL-Caltech)

A large asteroid thought to be the metallic core of a destroyed proto-planet appears to have molecules on its surface that shouldn't be there, according to a new study — unless they were delivered by other asteroids.
Daniel Stolte
,
University Communications
Oct. 21, 2016
Resources for the Media

Astronomers have discovered possible evidence for water on the surface of the largest metallic asteroid in the solar system.

Named 16 Psyche, the bolide is one of the most massive in the Asteroid Belt, measuring 186 miles across and consisting of almost pure nickel-iron metal. It is thought to be the remnant core of a planetary embryo that was mostly destroyed by impacts billions of years ago.

Previous observations of Psyche had shown no evidence for water on its surface. But in a paper accepted in The Astronomical Journal, Vishnu Reddy, an assistant professor at the University of Arizona's Lunar and Planetary Laboratory, argues that new observations from the NASA Infrared Telescope Facility show evidence for volatiles such as water or hydroxyl, a free radical consisting of one hydrogen atom bound to one oxygen atom, on Psyche's surface. In Earth's atmosphere, hydroxyl is extremely reactive and helps remove many chemical compounds. Hence, it is also known as the "detergent of the atmosphere."

"We did not expect a metallic asteroid like Psyche to be covered by water and/or hydroxyl," said Reddy, second author on the paper led by Driss Takir at the U.S. Geological Survey in Flagstaff, Arizona. "Metal-rich asteroids like Psyche are thought to have formed under dry conditions without the presence of water or hydroxyl, so we were puzzled by our observations at first."

The findings are interesting in the context of a proposed $500 million mission to send a spacecraft to Psyche, currently under review by NASA. Images taken by a spacecraft orbiting Psyche would enable us to distinguish between water and hydroxyl on the surface.

Asteroids are remaining fragments from the formation of the solar system that today orbit the sun between the orbits of Mars and Jupiter. Most of them fall into two broad categories: those rich in silicates, and those rich in carbon and volatiles. Metallic asteroids such as Psyche are extremely rare, making it a laboratory to study how planets formed.

While the source of this water on Psyche remains a mystery, Reddy and his colleagues propose two possible mechanisms for its formation.

"We think the water we see on Psyche might have been delivered to its surface by carbonaceous asteroids that impacted Psyche in the distant past," Reddy says.

"Our discovery of carbon and water on an asteroid that isn't supposed to have those compounds supports the notion that these building blocks of life could have been delivered to our Earth early in the history of our solar system history," said Reddy, who discovered similar dark, carbonaceous impactors rich in volatiles on the surface of asteroid Vesta by studying the images from NASA's Dawn mission. Alternatively, the hydroxyl could be the product of solar wind interacting with silicate minerals on Psyche's surface.

To further explore the hypothesis of carbon and water delivered to protoplanetary bodies by asteroids in the early solar system, the UA is leading NASA's OSIRIS-REx mission to bring back a sample from carbonaceous asteroid (101955) Bennu in 2023.