Quiescent Paper Wasps - Do They Sleep? 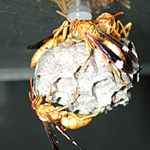 If paper wasps actually sleep, do they post extra sentries to guard the nest through the night? (Photo: Barrett Klein) 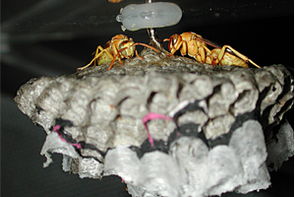 Do wasps actually sleep? A UA graduate student in entomology will talk about results from his pioneering research today at the Ecological Society of America meeting in Tucson. (Photo: Barrett Klein)

While most graduate students don't get as much sleep the rest of us do, Barrett Klein has found a way to rest vicariously through his research subjects. A master's candidate in entomology at the University of Arizona, Klein is pioneering sleep behavior research in an unusual species -- wasps.

The definition of what constitutes sleep is a sketchy and controversial topic that Klein calls "dubious."

"Sleep is a strange condition. It's hard enough to tell if a human is really asleep," Klein said. "Since sleep doesn't have a standard definition, you must look at physiological and behavioral sleep signs that are analogous to mammals."

With most mammals, an EEG (electroencephalogram), which monitors electrical activity in the brain, clearly shows neural patterns specific to the stages of sleep experienced by a monitored individual.

However, EEGs are nearly impossible to use with insects, forcing researchers to take alternate measures to determine the presence of sleep.

"As we share so much with other organisms, I wondered if we might find aspects of human sleep analogous or homologous to that of invertebrates, especially social insects," Klein says.

Critical to Klein's study is the goal is to distinguish rest from sleep in the wasps.

"By testing sleep 'signs' and repercussions when organisms are deprived of sleep, one might tap into the nature of why sleep exists," Klein says.

Klein looked at four local species of paper wasp, the Polistes flavus and Polistes arizonenzus in particular - both little studied.

Virtually any observations made on these species would be new to science," Klein said. "That's exciting."

In his experiments, Klein put his wasps through several tests to measure the analogous sleep behaviors and conditions. He chose several measures that define sleep from the scientific literature. Among them are:

With help from assistants, Klein observed the wasps day and night. He found that the wasps exhibited all of behaviors that define sleep. Researchers took observations every 10 minutes, recording the activity level and behavior of each wasp across several colonies.

Klein used vibrations to activate wasps' arousal threshholds, showing their resting behavior is reversible. He used thermal imaging equipment that measured a 2.5 degree Celsius drop in the wasp's temperature while it was immobile and in a resting posture.

One way Klein tested for a homeostatic regulator mechanism, or the tendency to maintain a rhythmicity of activity/inactivity in spite of adverse conditions, was to monitor the wasp behavior before, during and after a "dark regime." The wasp maintained its circadian rhythm, or behavioral pattern, suggesting that a control exists for the wasp's preference of a resting time and place.

The strategy is to interrupt the wasps' homeostatic levels by altering their normal rest pattern, thereby demonstrating that rest is necessary for wasps to function properly. Disrupting wasps' nighttime rest during their favored dark cycle had a greater impact than disrupting their daytime rest, as is the case with humans.

"Sleep has been deemed a time of bodily reparation, memory formation, learning enhancement, and energy conservation," Klein says. "If any of these or other assessments are true, it is imperative that researchers unveil every level sleep analysis."

"Thinking in terms of human applicability, sleep pathologies pervade human life, so the better we understand its mechanistic elements, the better we can understand how to approach dealing with these mechanisms when they have gone awry," he says.

"More abstractly, lessons about sleep's apparent functions and expressions within a social insect setting could teach us about our own need for sleep, especially in the context of social human dynamics."