The former governor of Mississippi also served as secretary of the Navy in the Obama administration and was U.S. ambassador to Saudi Arabia.
University Communications
April 12, 2018
Resources for the Media 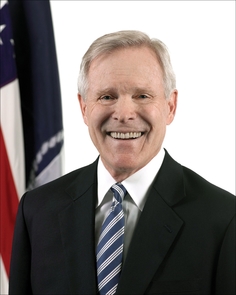 Ray Mabus, former secretary of the Navy, governor of Mississippi and U.S. ambassador to Saudi Arabia, will be the keynote speaker at the University of Arizona's 154th commencement on May 11.

Appointed by President Barack Obama, Mabus served as secretary of the Navy from 2009-2017, the longest tenure since World War I. As secretary, he focused on four fundamentals: people (sailors, Marines and their families); platforms (building more ships and aircraft); power (moving the services to alternative energy); and partnerships (with the American people and allies around the world). In June 2010, the president assigned Mabus the additional task of developing a long-term Gulf Coast restoration plan following the Deepwater Horizon oil spill.

Early in his term, Mabus established aggressive energy goals for the Navy and Marine Corps. The most ambitious of these goals requires that, by 2020, more than half of naval energy afloat and ashore will come from non-fossil fuel sources. The department met that goal ashore in 2015 and is positioned to meet it at sea no later than the deadline.

Mabus overhauled the personnel system, tripled paid maternity leave to 18 weeks, and opened all positions in the Navy and Marines to women. He was the most traveled senior federal executive, visiting more than 150 countries and flying more than 1.3 million miles. He signed twice as many ship construction contracts as the previous administration, ensuring that the Navy fleet will reach 300 ships by 2019.

As elected auditor for the state of Mississippi in the early 1980s, Mabus built a reputation for cracking down on public corruption. In 1987, he was elected Mississippi's governor at age 39, becoming the state's youngest governor in more than 150 years.

During Mabus' four years as governor, he emphasized education and job creation. He passed Better Education for Success Tomorrow, or B.E.S.T., and gave Mississippi's teachers the largest pay raise in the country. He was named one of Fortune magazine's top 10 education governors. In a 2000 poll, Mississippi voters ranked Mabus the best governor of the 20th century.

"Our graduates complete their degrees ready to make transformational impact in our world, and Ray Mabus is an ideal person to give them an opportunity to reflect on what that potential means," said UA President Robert C. Robbins. "He has an impeccable record of service and leadership, and I know he will inspire the Class of 2018 to do great things. I'm excited to share the Commencement platform with him this May."

Mabus is now CEO of The Mabus Group, a strategic advisory firm focusing on helping organizations develop resiliency and gain competitive advantages through change, and an adviser to Google Ventures. He serves as a lecturer at Harvard Law School, where he earned his law degree. He holds a bachelor's degree from the University of Mississippi and a master's degree from Johns Hopkins University.

"I am honored to be the Commencement speaker at such a renowned and iconic university, which sets and upholds a standard of excellence," Mabus said of the UA.

Other honors for Mabus include the Department of Defense's Distinguished Public Service Award, which he received twice; the Martin Luther King Jr. Social Responsibility Award; the National Wildlife Federation Conservation Achievement Award; and the King Abdul Aziz Award from Saudi Arabia, to which he served as U.S. ambassador from 1994-1996.

Mabus also is an honorary chief petty officer and an honorary Navy SEAL. Among his most cherished honors: He is the only person known to have thrown out the first pitch in all 30 Major League Baseball stadiums.

Commencement is scheduled for 7:30 p.m. on May 11 in Arizona Stadium. For more information: https://commencement.arizona.edu/