The National Science Foundation has granted $4.93 million for a project to identify the gene networks that control endosperm development and function right after pollination.
Susan McGinley
,
UA College of Agriculture and Life Sciences
Nov. 13, 2009
Resources for the Media 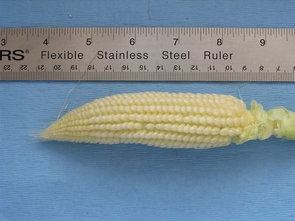 (Click to enlarge) An ear of corn 8 days after pollination, showing size of kernels that have early endosperm development. (Credit: Larkins-Yadegari Labs) 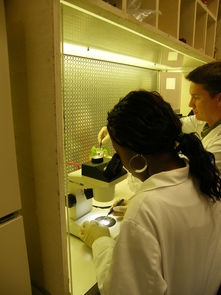 The starchy endosperm in cereal grains supplies more than 50 percent of the calories in the human diet worldwide and serves as raw material for many industrial products. Yet not much is known about the earliest stages of the endosperm's development, when critical genetic processes can influence a grain crop's yield, nutritional content, milling properties and other traits that affect its biological and economic value.

Using maize as a model, scientists and students at the University of Arizona, the University of Utah, Central Michigan University and New College of Florida will identify the gene networks that control endosperm development and function during the first eight to 10 days after pollination.

The National Science Foundation has granted $4.93 million for the five-year project, with the University of Arizona as the lead institution.

"Our goal for this research is to identify the genes that make the endosperm go from a single cell to the differentiated tissue that makes the storage products for the seed – protein, starch and oils," said Brian Larkins, principal investigator and professor of plant sciences at the UA. "No one really knows what those genes are and what they do. Then we can go into various types of corn of different protein and starch quality and see if these genes are tied to those traits."

Most research has centered on the later stages of endosperm development. The earlier stages are more difficult to study because the developing kernel is so small.

"We've studied the grain-filling period of corn for a long time, but no one has ever studied what happens between the time it's pollinated and the time it's 10 days old, when it becomes a kernel of corn," Larkins saod.

Co-principal investigators on the project include Ramin Yadegari of the UA, Amy Clore from the New College of Florida, Joanne Dannenhoffer from Central Michigan University and Gary Drews from the University of Utah.

The research will build on Larkins' 35 years of work on protein quality in maize endosperm, and on UA BIO5 Institute member Rod Wing's contributions to the international effort in decoding the corn genome.

In addition, Yadegari's and Drew's four-year study on early endosperm development in the model plant Arabadopsis, a member of the mustard family, offers keys to understanding more about early endosperm formation in maize.

"We have identified important regulatory proteins that may control early endosperm development in Arabadopsis," said Yadegari, an associate professor of plant sciences and member of the BIO5 Institute. "The same genes that work in Arabidopsis endosperm may also work in corn endosperm."

The multi-institutional team will identify genes active during early endosperm development, characterize them and compare their activity and function to traits identified in Arabidopsis plants. Larkins hopes the sequencing will take only two years to reveal which genes are expressed at different stages. After that, computer analyses of gene maps will be tied to maps of traits associated with various grain qualities in maize.

Undergraduate, graduate and postdoctoral students will be involved throughout the project, with undergraduates having particular emphasis. The goal is to strengthen student research and training at all of the participating institutions.

Student researchers from predominantly undergraduate Central Michigan University and exclusively undergraduate New College of Florida will spend a summer each year in laboratories at the UA and the University of Utah, and take their work back to their home institutions to complete with their advisors. Co-principal investigators Dannenhoffer and Clore were once a postdoctoral researcher and a graduate student, respectively, at the UA.

More undergraduate researchers will be recruited from the classroom, local community colleges, and underrepresented student populations at all institutions, according to the proposal. Another goal is to "increase the number of underrepresented minorities in science and to communicate science through outreach to K-12 teachers and to nonscientists."

Results will be disseminated immediately for laboratory and classroom use throughout the world. Ongoing scientific and educational outcomes will be available online.

"It's a big project that will lead to many people being involved, with years of work," Larkins said. "What will bear fruit from this regarding corn and cereals should be substantial."

Basic and applied research will proceed simultaneously during the project, with contributions in developmental biology, cereal crops and ultimately, tangible results that can be translated in the field.

"We can take our basic information and go immediately to a crop," Larkins said. "Several institutions are eager to use this information to help them sort out information on crop improvement."

One important aspect of the research is to determine the characteristics of the early endosperm that result in a high yielding grain.

"We want to identify the genes that are at least in part involved in yield," Larkins said. "The greater the proliferation of endosperm, the larger the seed and the higher the yield."