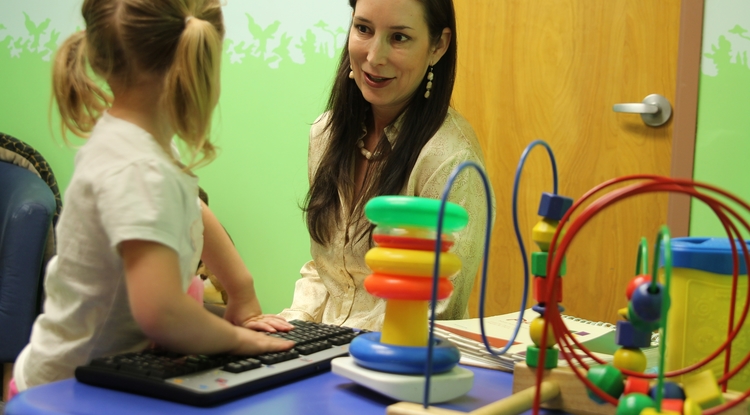 Sleep is essential in helping young children apply what they learn, according to new research by Rebecca Gómez, associate professor in the UA Department of Psychology. In this Q&A, she talks about her new work, which she presented at the Cognitive Neuroscience Society annual meeting in Boston on April 8 as part of a symposium on sleep and memory.
Daniel Stolte
,
University Relations - Communications
April 15, 2014
Resources for the Media
Extra Info:

Interested in having your child contribute to science? If your child is between the ages of 3 and a half months and 3 and a half years, please contact the University ofr Arizona Child Cognition Lab at 520-626-0278 or visit the lab's website. 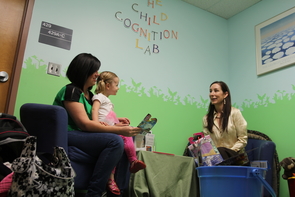 Sleep is essential in helping young children apply what they learn, according to new research by Rebecca Gómez, associate professor in the UA Department of Psychology. In this Q&A, she talks about her new work, which she presented at the Cognitive Neuroscience Society annual meeting in Boston on April 8 as part of a symposium on sleep and memory.

Dr. Gómez, in a nutshell, what is the goal of your research?

I look at how learning unfolds over time, with the goal of understanding how children learn overall. If we understand how infants and young children learn, if we understand the mechanisms of how the brain develops and supports learning, we will be in a better position to understand when learning goes awry. And obviously it is interesting in itself to understand how the brain develops. You have these little babies who are completely helpless when they're born, and by a year of age, they know words, they're standing and taking their first steps. How does the brain support that change? That's a mystery and the overall goal is to understand how they learn things like language and how memory develops over time.

Why do children as young as 6 months start forming rules about language, but don't talk for another year-and-a-half or so?

They can't. For one thing, their vocal apparatus is not developed enough, which is why we as adults have trouble understanding little kids when they start talking. It takes practice to articulate words. But through work by other researchers, we know that kids actually learn the meaning of some vocabulary as early as six months. At that age, they have a vocabulary of anywhere from 25 to 50 words. They learn common words like, say, hands and feet; they just can't articulate them.

They can understand the word "feet"?

They can. If you say 'feet,' they know what feet are; we can test that. They understand the meaning of very common things, which is remarkable. They are learning a lot about language long before they are ever taught. It's amazing. Less than 20 years ago, we didn't know kids could learn so rapidly and understand a lot more than they can say.

What experiments do you use in your research?

In our studies, the children listen to a made-up language they have never heard before. It's an artificial language with certain rules about how words are ordered, just like in a real language. The children listen to that for a short period of time, and then we test them by giving them new sentences from the artificial language that adhere to the rules, and sentences that violate the rules. We measure whether they can discriminate those two different types of stimuli.

Your study subjects can't express themselves like adults can. How do you work around that?

During the learning phase, the child is playing quietly while we expose them to recorded, spoken "sentences" of the artificial language over loudspeakers. They'd hear, for example, "Vot kicey jic. Pel wadim rud. Pel kicey rud." During those 8 minutes, they just get involved in their own thing, or they crawl around or play with toys. It is so amazing that all the while, they are learning. For the test, we take them to a booth where they are seated on their parent’s lap. To start the trial, we flash a light in front of the infant to get his or her attention. Then a light will flash off to the side, and as soon as the child looks in that direction, we start playing the language sample from that same side. We stop playback when the child looks away for two seconds. We do that for the duration of the test trials, and there will be an equal number of what we call legal test trials – following the grammar rules of the artificial language – and illegal test trials, where the rules are violated. We measure the average times of how long they keep their head turned toward the stimulus before they turn away.

In this research video, Rebecca Gómez’s team uses an established testing method known as the head-turn preference procedure to test subjects who are unable to express themselves verbally.

What do you find?

Why do you use an artificial language?

Because kids know so much about their language by the time we see them. So we have them listen to things they have never heard before if we want to study learning.

You just returned from a conference where you presented exciting results. Can you tell us more?

We found that sleep allows children to combine sentences that they hear spoken by other speakers. When we learn a language, we understand it regardless of who is talking to us. So one question we had was would children be able to generalize across talkers? If we gave the children three samples spoken in one female voice, and three examples spoken in a different female voice, they couldn't generalize when we tested them right after learning. But they can after sleep. It's like mom giving you a few different language examples, and grandma giving you a few other ones. Could you combine everything you were hearing? When we test the infants right after the learning phase, they don't seem to be able to do this, but after they nap, they can. This tells us that sleep is really critical for that learning to happen. The other important finding is that for generalization of language rules, even children as old as 3 years, an age when many of them transition out of naps, sleep seems to be really important for them to be able to generalize.

Does your research tell us about the role of sleep in adult learning?

It's still not completely understood why learning a second language is so difficult for adults. I think this work tells us it's the neural structures that kids have when they are very young that cause them to learn language in a very different way. A structure in our brain, the hippocampus, is critical for processing and storing new memories. In young children, the hippocampus is not completely connected with the other brain regions that are critical for learning. We think that young children learn more with their cortex. This makes them exceptionally good at learning the subtleties of sound patterns. As they become adults, the hippocampus takes over. This is a powerful, rapid-learning organ that may not be as dedicated to pattern learning as to other kinds of learning. Because learning the sounds of language, how they are distributed and ordered requires pattern learning, this could partially explain why we learn languages differently as adults.