The strategy, detailed in the journal Science, prepares people for a hotter and drier Southwestern U.S. through water conservation and the continued development of ways to harness energy from the sun, wind and Earth.
Stephanie Doster
,
Institute of the Environment
June 24, 2010
Resources for the Media 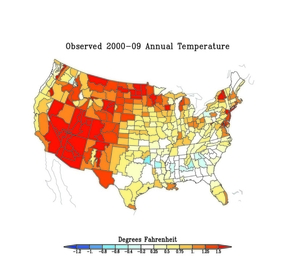 Map of the observed difference between the average annual U.S. temperatures (degrees F) for this century (2000 to 2009) and those of the last century (1900 to 1999). It is clear that the U.S. has been much warmer in this century than the last, particularly in the West, and even more so in the Southwest and headwaters of the Colorado River. (Source: NOAA; Click to enlarge) 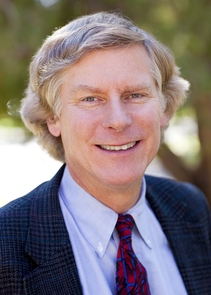 Two prominent climate experts, including one from the University of Arizona, are calling for a "no-regrets" strategy for planning for a hotter and drier western North America. Their advice: use water conservatively and continue developing ways to harness energy from the sun, wind and Earth.

Jonathan Overpeck, principal investigator with the Climate Assessment for the Southwest at the UA, and Bradley Udall, director of the Western Water Assessment at the University of Colorado, write in the June 25 issue of the journal Science that such an approach is necessary for coping with a wide range of projected future climate changes in the West and Southwest.

"The West, and especially the Southwest, is leading the nation in climate change – warming, drying, less late-winter snowpack and drought – as well as the impacts of this change," said Overpeck, a UA professor of geosciences and atmospheric sciences and co-director of the Institute of the Environment.

In the past 10 years, temperatures in almost all areas in western North America have surpassed the 20th century average, many by more than 1 or even 2 degrees Fahrenheit. The warming has decreased late-season snowpack, which serves as a water reservoir, as well as the annual flow of the Colorado River, the researchers said.

Those reductions, combined with the worst drought observed since 1900, haven't helped matters; water storage in Lakes Powell and Mead, the largest southwestern water reservoirs, fell nearly 50 percent between 1999 and 2004 and has not risen significantly since.

In addition to water, vegetation is feeling the effects of climate change. Work by UA's David Breshears and colleagues have already showed that more than 1 million hectares of piñon pine have died in the Southwest in the last few decades from a lethal combination of record-high temperatures and uncommonly severe drought. In addition, the frequency of large wildfires has increased as snowpack has decreased.

While researchers are confident that the higher temperatures and resulting changes in snowpack, Colorado River flow, vegetation mortality and wildfires are human-caused, they don't know whether the drought that has plagued the West for the last 10 years – the worst since record-keeping began – is because of humans, Overpeck said.

"It's critical to determine the causes of the observed change, including the drought, because then we will have a much improved ability to say what's coming next, in the future," Overpeck said.

To complicate issues, studies published to date suggest that Colorado River flow could continue to decrease by 20 percent by 2050, with severe implications for cities served by Colorado River water and for agricultural production.

"One thing is for sure," Overpeck said. "The best strategy now – the no-regrets strategy – is to prepare for a hotter and drier West, Southwest and Arizona, and to make sure we don't commit water to things now in ways that could make water shortages in the future more difficult to deal with."

Fortunately, Overpeck said, scientists have a better understanding about potential future climate change in western North America than for many other regions around the globe, making it easier for policy makers to plan coping strategies.

"That offers a way to make up economically for the costs that will be incurred in adapting to the warmer, drier conditions," Overpeck said. "And it will have the side benefit of decreasing the chances, through reducing greenhouse gas emissions, for potentially greater human-caused climate change."