Ripples in Space: The Little Telescope That Could

For the first time, scientists have directly detected gravitational waves — ripples in space and time — in addition to light from the spectacular collision of two neutron stars. This marks the first time that a cosmic event has been viewed in both gravitational waves and light, with profound implications for our understanding of the cosmos.
Daniel Stolte/University Communications and Jennifer Chu/MIT News Office
Oct. 16, 2017
Resources for the Media
Extra Info:

Watch how scientists hunted down the colliding neutron stars that sent ripples through space time in this video. (Credit: LIGO-Virgo)

Cataclysmic collision: An artist’s illustration of two merging neutron stars. The rippling space-time grid represents gravitational waves that travel out from the collision, while the narrow beams show the bursts of gamma rays that are shot out just seconds after the gravitational waves. Swirling clouds of material ejected from the merging stars also are depicted. The clouds glow with visible and other wavelengths of light. (Credit: NSF/LIGO/Sonoma State University/A. Simonnet) 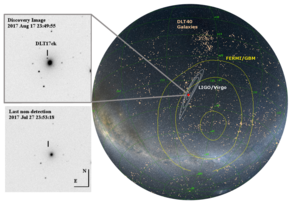 This discovery image of the neutron star merger shows what appears like "a star that wasn't there before" in the outskirts of a galaxy called NGC 4993, located in the constellation Hydra, about 130 million light-years from Earth. The illustration shows the regions where the Fermi space telescope detected the gamma-ray burst, the area pinpointed by the LIGO-Virgo gravity wave detectors and the galaxies monitored routinely by David Sand's DLT40 survey. (Credit: LIGO-Virgo)

About 130 million years ago, in a galaxy … well, actually not very far away by cosmic standards ... something happened that would throw members of an intelligent race inhabiting a small blue dot in the vast void of the Milky Way into a tizzy.

A pair of neutron stars, each no larger than a small city and locked in a fatal embrace at about twice the distance between Tucson and Phoenix, ended their swirling dance that had lasted for millennia. The cataclysmic collision was so violent that it caused a shiver in the cosmos and sent ripples through the fabric of space and time.

On the morning of Aug. 17, these gravitational waves washed up to the pale blue dot, tripping ultrasensitive detectors waiting for exactly this type of event. First, the U.S.-based Laser Interferometer Gravitational-Wave Observatory, or LIGO, caught a strong signal of gravitational waves from space. At nearly the same time, the Gamma-ray Burst Monitor on NASA's Fermi space telescope had registered a burst of gamma rays. A third detector, Virgo, situated near Pisa, Italy, provided clues to the location of the cosmic event.

With these coordinates, a few observatories around the world were able, hours later, to start searching the region of the sky where the signal was thought to originate. Among them: a supernova survey instrument that its principal investigator, University of Arizona assistant professor David Sand, describes as a "souped-up backyard telescope." Sporting a puny, 16-inch primary mirror and tucked away in a dome atop a mountain in the Chilean Atacama Desert, the instrument is rigged with custom-made electronics enabling it to scan the night sky on its own, without human supervision.

"We had to wait until it got dark, so we knew we had a few hours or so to prepare," Sand said.

About 11 hours after the gravitational waves came in, Sand's automated telescope detected a blip — like a star that wasn't there before — in the location relayed by the LIGO and Virgo teams.

That blip, according to Laura Cadonati, a professor of physics at Georgia Tech who is the deputy spokesperson for the LIGO Scientific Collaboration, "will be remembered as one of the most studied astrophysical events in history.”

"Our instrument is the smallest telescope that was able to identify this event early on," Sand said. "It's the little engine that could. This discovery shows we can punch above our weight."

The LIGO data indicated that two astrophysical objects located at the relatively close distance of about 130 million light-years from Earth had been spiraling in toward each other. It appeared that the objects were not as massive as binary black holes — objects that LIGO and Virgo have previously detected. Instead, the inspiraling objects were estimated to be in a range from around 1.1 to 1.6 times the mass of the sun, in the mass range of neutron stars. Neutron stars are the smallest, densest stars known to exist and are formed when massive stars explode in supernovas. Thought to be a mere 20 kilometers, or 12 miles, in diameter, a neutron star is so dense that a teaspoon of its material would weigh about a billion tons under Earth's gravity.

"Near the very end, the two neutron stars were orbiting each other almost at the speed of light," Sand said. "That's why they're warping space and time. They're so dense and moving so fast."

As the neutron stars spiraled together, they emitted gravitational waves that were detectable for about 100 seconds; when they collided, a flash of light in the form of gamma rays was emitted and seen on Earth about two seconds after the gravitational waves. In the days and weeks following the smashup, other forms of light, or electromagnetic radiation — including X-ray, ultraviolet, optical, infrared and radio waves — were detected.

Each LIGO observatory consists of two long tunnels arranged in an L shape, at the joint of which a laser beam is split in two. Light is sent down the length of each tunnel, then reflected back in the direction it came from by a suspended mirror. In the absence of gravitational waves, the laser light in each tunnel should return to the location where the beams were split at precisely the same time. If a gravitational wave passes through the observatory, it will alter each laser beam's arrival time, creating an almost imperceptible change in the observatory's output signal.

While binary black holes produce "chirps" lasting a fraction of a second in the LIGO detector's sensitive band, the Aug. 17 chirp, named GW170817, lasted approximately 100 seconds and was seen through the entire frequency range of LIGO — about the same range as common musical instruments. Scientists could identify the chirp source as objects that were much less massive than the black holes seen to date.

This animation captures phenomena observed over the course of nine days following the neutron star merger known as GW170817. They include gravitational waves (pale arcs), a near-light-speed jet that produced gamma rays (magenta), expanding debris from a kilonova that produced ultraviolet (violet), optical and infrared (blue-white to red) emission, and, once the jet directed toward us expanded into our view from Earth, X-rays (blue). (Credit: NASA's Goddard Space Flight Center/CI Lab)
----------
The observations have given astronomers an unprecedented opportunity to probe a collision of two neutron stars. For example, observations made by the U.S. Gemini Observatory, the European Very Large Telescope and NASA's Hubble Space Telescope reveal signatures of recently synthesized material, including gold and platinum, solving a decades-long mystery of where about half of all elements heavier than iron are produced.

The detection opens the window of a long-awaited "multi-messenger" astronomy, according to Caltech's David H. Reitze, executive director of the LIGO Laboratory, as it marks "the first time that scientists have observed a cataclysmic astrophysical event in both gravitational waves and electromagnetic waves — our cosmic messengers."

Together with Stefano Valenti, an assistant professor at the University of California, Davis, he created the DLT40 survey, which stands for "Distance Less Than 40 Megaparsecs," or 120 million light-years, to discover supernovae "while they're still young."

"Getting different pictures of the same event tells us different things about those objects," Sand explained. "The light spectra tell us about the energetics of the explosion, and how many elements were produced and how much. The gravitational waves tell us about the distance and the masses of the objects involved."

Being able to combine these different observational datasets is what has the scientific community abuzz, Sand said.

"We now have a different way to measure the Hubble constant, which tells us about the expansion rate of the universe," he said. "The hardest thing in astronomy is measuring distances, and it's especially hard for relatively nearby galaxies like this one. The gravitational waves tell us about its distance, and the optical light tells us about how fast it is moving away from us."

To get a really good idea of the Hubble constant, though, it will take a sample of dozens of these events, Sand added.

"Our background analysis showed an event of this strength happens less than once in 80,000 years by random coincidence, so we recognized this right away as a very confident detection and a remarkably nearby source," Georgia Tech's Cadonati added. "This detection has genuinely opened the doors to a new way of doing astrophysics."

The LIGO-Virgo results are published in the journal Physical Review Letters. Additional papers from the LIGO and Virgo collaborations and the astronomical community have been either submitted or accepted for publication in various journals.