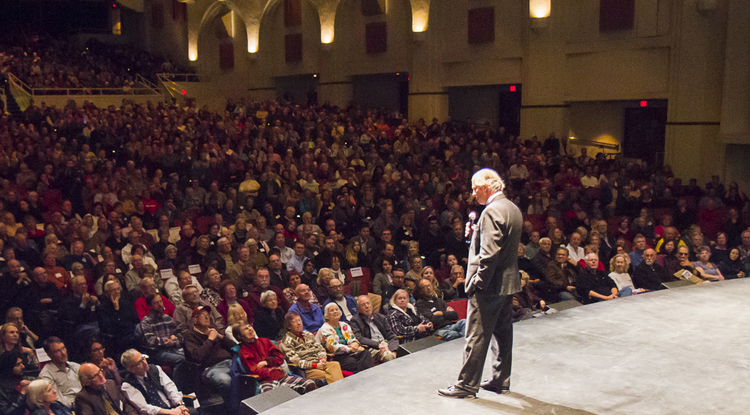 The UA president's focus on the 21st-century convergence of the physical, digital and biological worlds will be addressed by "Humans, Data and Machines," which launched with a lecture by UA computer scientist Stephen Kobourov.
Doug Carroll
,
University Communications
Jan. 22, 2018
Resources for the Media
Extra Info:
What:
College of Science lecture series
When:
7 p.m. Mondays through Feb. 26
Where:
Centennial Hall 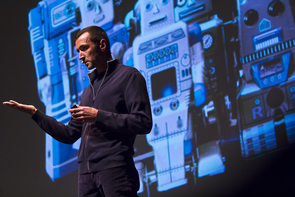 Artificial intelligence, Stephen Kobourov says, "is neither artificial nor intelligent. It's an aspirational term that reflects a goal — and the goal posts keep moving. 'Mimicking intelligence' might be better." (Photo: Bob Demers/UANews) 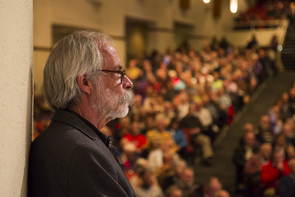 Your fear of algorithms is unfounded, Stephen Kobourov says. Your fear of human error? That might be worth considering.

Kobourov, a University of Arizona computer science professor, kicked off the 13th annual College of Science lecture series Monday night with a fast-moving, entertaining talk on "Problem Solving With Algorithms" that referenced everything from quadratic equations to the internet-busting "Gangnam Style" video.

"The word 'algorithm' actually derives from the name of a ninth-century Persian mathematician," Koubourov said. "Very broadly, an algorithm is a recipe.... It's easy to blame algorithms, but algorithms do what we ask."

Kobourov's lecture veered often into pop culture and provided a strong opener for the "Humans, Data and Machines" series, designed to delve into various aspects of the revolutionary social change now underway with the convergence of the physical, digital and biological worlds. The moment has been tagged by German engineer and economist Klaus Schwab as the Fourth Industrial Revolution, such is its seismic, global significance.

UA President Robert C. Robbins has identified the convergence as something that will demand a new way of academic thinking in fields such as artificial intelligence, robotics and autonomous vehicles. Robbins and Joaquin Ruiz, dean of the College of Science, were on hand to welcome the capacity Centennial Hall crowd to the free series.

"I've been hearing about this series since I arrived in May," Robbins told the audience. "People have been telling me that the three biggest things in Tucson are the Festival of Books, the Gem and Mineral Show and this series."

Kobourov took it from there, saying that robots shouldn't be discounted by a world that at one time was skeptical of X-rays, nuclear energy and computers. Whether their artificial intelligence will be a blessing or a curse has scientists such as Stephen Hawking, Bill Gates and Elon Musk watching closely, Kobourov said.

Artificial intelligence, he said, "is neither artificial nor intelligent. It's an aspirational term that reflects a goal — and the goal posts keep moving. 'Mimicking intelligence' might be better."

The key to understanding AI, or machine learning, is that while traditional algorithms were designed to provide exact solutions to problems, newer algorithms provide "good enough" solutions, Kobourov said. Instead of looking for absolutes, machines now learn correlations, patterns and trends from the way you address a letter, to the shows you watch on Netflix, to the way you draw objects while playing the online game "Quick, Draw!"

When algorithms succeed, as they did with the Apollo 11 space flight and with the Human Genome Project, they don't get much love, Kobourov noted. But they're remembered when they come up faulty, as they did with Y2K and when the popular "Gangnam Style" brought YouTube to a temporary halt a few years ago.

Problems such as determining the best travel route for visiting all 50 U.S. state capitals in succession can be too unwieldy even for a machine.

"One definition of a good algorithm is one that finishes while we're still alive," Kobourov quipped.

Lest you think humans are merely bit players in the universe from this point forward, Kobourov quoted from a 1949 speech given by Sir Geoffrey Jefferson, a British neurologist and neurosurgeon: "Not until a machine can write a sonnet or compose a concerto because of thoughts and emotions felt, and not by the chance fall of symbols, could we agree that machine equals brain."

"That's worth thinking about," Kobourov concluded.