Rock On: A Reunion at the UA Mineral Museum

Two pieces of Bisbee-born azurite met again, by chance, thanks to the eagle eye of a student worker. Here's the story behind how it happened.
Robin Tricoles
,
University Relations - Communications
June 15, 2016
Resources for the Media
Extra Info: 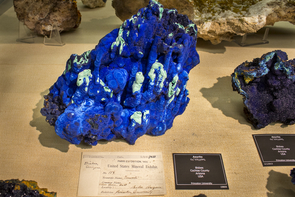 Bob Downs emerges from a hallway leading to the heart of the University of Arizona Mineral Museum. He declares that "Yang found four new minerals just this morning." Downs is referring to Hexiong Yang, a UA researcher and expert in crystallography and mineralogy.

Downs, too, is an expert in those areas and a UA professor of geology. Both researchers spend considerable time at the mineral museum, where Downs is curator. The museum is located on the lower level of the Flandrau Science Center & Planetarium on campus.

But what doesn't happen all the time is when two specimens — with precisely the same origin but acquired separately — part ways, and then meet again by chance.

Here's the backstory: In the late 19th century, copper mining took hold in Bisbee, Arizona, under the direction of the Phelps Dodge Corp., initially founded in 1834 as an import-export business. Princeton University graduates ran some of the area mines, including Copper Queen.

Naturally, mineral specimens, including malachite, chrysocolla and azurite, gleaned from those mines made their way from Arizona to Princeton and became part of Princeton's mineral collection.

About five years ago, Downs received a call from Princeton's mineral museum, asking if the UA would be interested in repatriating the minerals that originally hailed from Arizona.

Downs says it is not clear when those specimens were sent to Princeton, but he says it is known that some of them traveled to lands far beyond New Jersey, serving as ambassadors of sorts during their tenure at Princeton.

Standing beside a display case that contains a dozen specimens of azurite, Downs peers through its protective glass top.

"Some of these pieces went to the World's Fair in Paris," he says. "That was in 1900. They were sent there because the Phelps Dodge Corp. of Bisbee was politicking to make Arizona into a state. They were pushing for (statehood) because they were creating the copper for the nation's electrical infrastructure, and so they thought they had a significant reason for the U.S. to accept Arizona as a state."

Over the years, mineral collectors have donated their collections to the UA Mineral Museum, as have various mines. In fact, one piece of azurite on display bears a thin drop of white wax on its surface, courtesy of a copper miner's candle.

With the continuous growth of its collection, the Mineral Museum employs a student who cleans up incoming specimens and sorts them, and that is how the two specimens were reunited sometime in the last year.

"For whatever reason, the student saw this big piece here, 19809," says Downs, pointing to the Capri blue and jade green specimen tucked inside the glass case. "He took another piece out of the collection junk drawer, put the two pieces together — and, click, they fit."

William Earl Dodge's grandson, Princeton alumnus Cleveland Hoadley Dodge, had donated the big piece to his alma mater, and it was one of the many pieces received in the repatriation.

"The little piece came to us about the same time, but it came from Bisbee," Downs says. "We don't know how it came to us because it wasn't a piece good enough to display, which is why it was in the junk drawer.

"It's remarkable. Here's a piece that went to the World's Fair, then it got stored at Princeton for all those years, and then it got repatriated. It's a perfect fit. There was actually another piece in the drawer with it, but we haven't figured out where it connects yet. But we might."