School of Art Faculty Member 'One of Most Important Voices Today'

Sama Alshaibi was studying to be a photojournalist when a professor encouraged her to move in a more conceptual, artistic direction.

The move paid off for Alshaibi, an associate professor in the University of Arizona School of Art, who is internationally recognized for her photography and video work, both of which explore themes of race, gender and exile.

Born in Basra, Iraq to an Iraqi father and Palestinian mother, Alshaibi is a naturalized U.S. citizen who studied photography at Columbia College in Chicago and earned her Master of Fine Arts from the University of Colorado at Boulder.

Today, Alshaibi is one of four recipients of the UA's 1885 Society Distinguished Scholars Award, supported through the UA Foundation's 1885 Society and sponsored by the UA Office of the President. The award recognizes outstanding mid-career faculty who are leading experts in their fields and highly valued contributors to the UA's teaching, research and outreach missions.

The Regents' and Distinguished Professors who reviewed the nominations said Alshaibi is "clearly one of the most important voices today in dealing art pertaining to issues of the Middle East, women, the body, Islam and exile."

Her work deals with conflict, war, exile, power and the quest for survival and she has exhibited in more than 10 solo exhibitions. Alshaibi says being an artist is an evolving process and that her work has opened up over the years as she's understood more about how her perspective fits into a broader context.

"When I first started working as an artist, I thought my work was totally about war and exile. As time progressed, the more I traveled, I realized the foundation underneath that is much more universal," Alshaibi said.
"The majority of my work comes from spaces of conflict and that's in different forms. Every time I would exhibit my work, I'd have a different audience and I learned so much from that participation and what they saw in that and the humanity evoked in them, even though they're coming from very different perspectives. All their stories showed me the truth behind my work."
Alshaibi learned photography very young from her father and studied in college under the legendary photojournalist John H. White in Chicago.
"I was telling stories about war, exile and oppression and because it wasn't around me, the best way to do that was through conceptual means," she said. "He said, 'You're not a photojournalist, you're an artist. You're working on the same subjects, you're just doing it in a different way.'"
Alshaibi says teaching art is about opening a dialogue with students and drawing out their authentic life experiences. Still, she was surprised to find herself balancing a career as a working artist with days in front of the classroom.
"I love making work, but even though my father is a professor, I really didn't see myself in that role. I saw myself in the field and didn’t think the classroom was a place I would equally find rewarding," she said. "In my third class I knew if was definitely destined to be a professor. I loved it and I felt very at home in the classroom."
Alshaibi says she was overwhelmed by the 1885 Society Distinguished Scholars Award.

"It's a culmination of all those little decisions I've made, every singe day," she said. "I never went about my career teaching and being an artist to have any grand moments, it's about all the little things that have an impact." 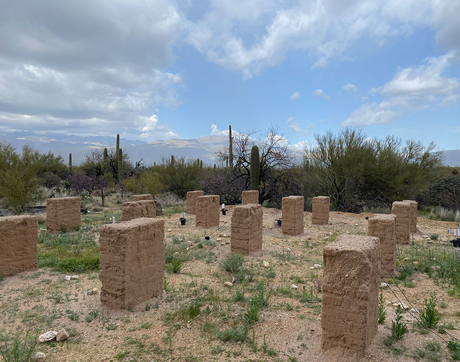