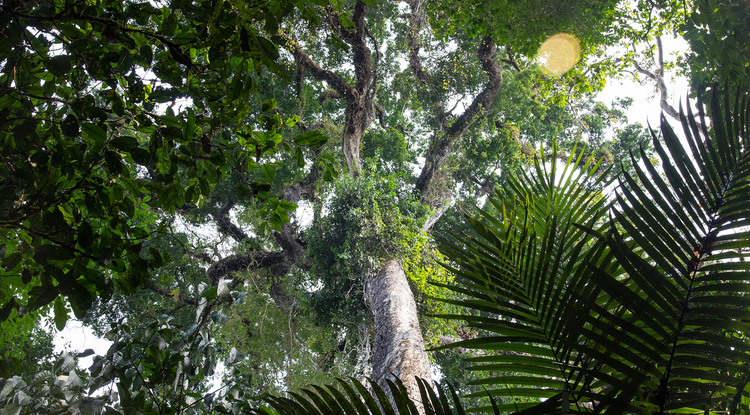 What lidar sees: the canopy structure of the rainforest, as seen from the ground. (Photo: Marielle Smith)

Seeing the Forest Through the Lidar Lens 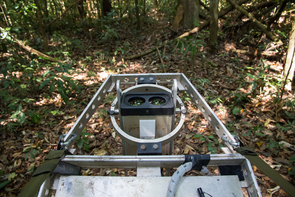 A lidar instrument sends laser pulses skyward. The laser pulses reflect off leaves; a sensor measures the time for the reflections to come back, and from that, the instrument can build a two-dimensional slice of the rainforest canopy. (Photo: Marielle Smith) 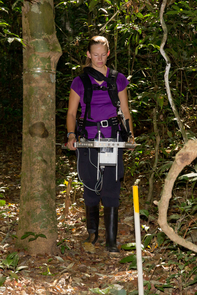 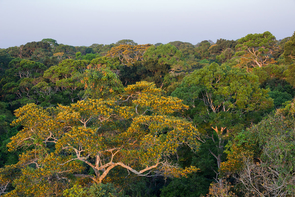 Contrary to what was previously thought, the tallest trees in the Amazon put on more leaves during the dry season than during the rainy season. (Photo: Marielle Smith)

The Amazon rainforest isn’t necessarily a place that many would associate with a drought, yet prolonged dry spells are projected to become more prevalent and severe because of climate change. The question is how these droughts are going to affect the rainforest, which has a large influence on global climate and future warming.

A study, published in the journal New Phytologist and led by Michigan State University research associate Marielle Smith and assistant professor of forestry Scott Stark, examined the Amazon’s response to dry seasons and droughts in order to better predict how forest growth and physiology will affect tree diversity and, ultimately, the planet’s climate.

Due to its combination of wet forest structure and a strong dry season, the Tapajós National Forest in Brazil – a site selected by a team of scientists including University of Arizona professor Scott Saleska – may be a good indicator for climate change responses, which is what led researchers to the location.

To gather information and monitor the rainforest, the researchers took a detailed view of its structure using light detection and ranging, or lidar, technology, also used in autonomous vehicles to map terrain. The lidar produced information in two-dimensional slices that described how leaf area is structured across heights, and how the leaves are structured in micro-environments with different light, temperature and humidity.

“This is useful because the activity of a forest as a whole – its growth and exchanges of gas and energy with the atmosphere – is largely determined by how leaves are distributed in the mosaic of environments that the forest itself creates,” Smith said.

While earning her doctorate at UA, Smith and others in Saleska’s research group conducted a total of 41 monthly surveys conducted over the course of four years, between 2010 and 2017, and included three non-drought years and one El Niño drought year.

“Through the lidar lens, we surveyed the structure of an eastern Amazon forest over several years to see how it changed in response to seasonal water stress and a strong El Niño drought,” Smith said.

For years, biologists have been trying to determine whether light or water is more important to the rainforest.

“Much of our work – including Marielle’s – has been finding that this concept is way oversimplified,” said Saleska.

“Our higher-resolution data allowed us to divide the forest by both height and light environments, and revealed something more complex,” Smith said.

The expectation was that when the amount of leaves in tall trees increases during the dry season, smaller trees beneath lose some of their leaves as a result of being shaded; however, the data showed that that is not what happened. Instead, it was the small trees that were in open areas – forest “gaps,” where shade is low and sunlight high – that lost leaves. Shaded trees, surprisingly, added leaf area at the same time as the tall trees. The trends were the same in response to drought.

“It is key to understand that dry periods are typically sunnier periods,” Smith said. “Tall trees that also have deeper roots, giving more access to water, may take advantage of the increased light and expand their crowns. Small trees with shallow roots may be hurt more by hot, sunny conditions and contract their crowns or die. Small trees in the shade, however, may take advantage of increased light in the cooler, more humid understory.”

These results show that a tree’s response to dry periods is dependent on environmental conditions imposed by the structure of the rainforest itself.

This research helps to craft a story of how canopy micro-environments, tree heights, seasonality and drought determine the productivity of the forest as a whole, and even which trees will win orand which will lose when their climate changes.

“The complexity, diversity and dynamism of the canopy structure are gloriously important to this story,” said Saleska, whose lab group has long highlighted the importance of the rainforest’s own biology in determining its seasonal changes.

Understanding these dynamic structures is crucial to predicting the fate of the Amazon and other forests around the globe.