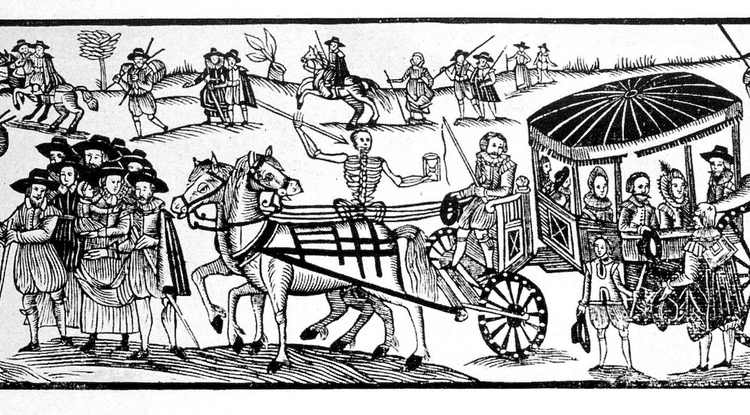 "Runaways fleeing from the plague," a woodcut from 'A Looking-glasse for City and Countrey,' printed by H. Gosson in 1630. Ute Lotz-Heumman, director of the UArizona Division for Late Medieval and Reformation Studies, said that when rich people can leave town to flee a pandemic, either now or in the past, you immediately have a social divide. (Credit: Wellcome Images)

From Social Distancing to Disinformation, COVID-19 Shows How History Repeats 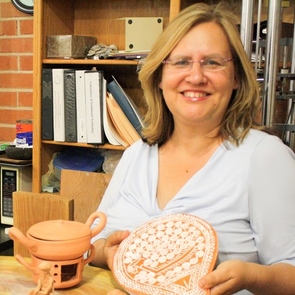 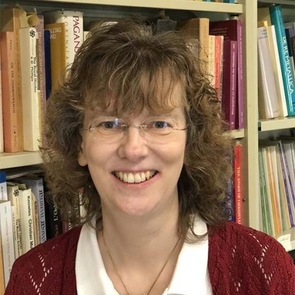 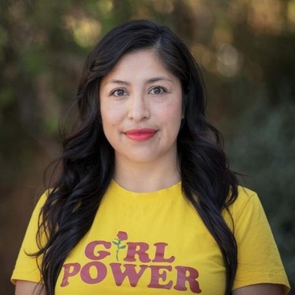 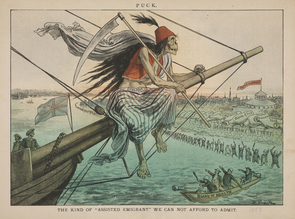 The cholera pandemic in the 19th century incited fear of outsiders. This political cartoon is captioned, "The kind of 'assisted emigrant' we can not afford to admit." Cartoon by Friedrich Graetz, published in Puck, July 18, 1883. 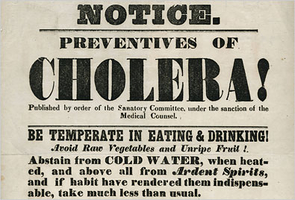 1849 Cholera prevention poster in New York City. The poster advises people to abstain "above all from ardent spirits."

Pandemics vary in important ways, from how illness is transmitted to the length of time someone is contagious before they show symptoms.

Still, there is much to learn from the world's previous experience with communicable diseases.

Three scholars in the College of Social and Behavioral Sciences at the University of Arizona see several parallels between COVID-19 and previous pandemics, including a reliance on time-honored strategies such as quarantine, the struggle to educate people amid a barrage of wrong or confusing information, disproportionate impact on poor and working-class people, and the way a pandemic can unveil both the worst and the best of humanity.

Eleni Hasaki, an associate professor of anthropology and classics, taught a course this spring called "Health and Medicine in Classical Antiquity." Returning from spring break to virtual Zoom classes, her students studied, through eye-witness accounts, three plagues spanning a millennium in Greek and Roman history: the Athenian Plague (430-426 B.C.), the Antonine Plague (A.D. 165-180), and the Justinian Plague (A.D. 541/544-750).

Ute Lotz-Heumman, director of the Division for Late Medieval and Reformation Studies, has taught courses on contagious diseases that spread in the 16th to 18th centuries, most notably the plague and smallpox. She recently penned a popular article in The Conversation titled "Diary of Samuel Pepys shows how life under the bubonic plague mirrored today's pandemic."

Ruth Oropeza, a doctoral degree candidate in the Department of History, studies the impact that communicable and infectious diseases had in shaping public health norms in 19th-century Spain, and her research includes an examination of the global cholera pandemic of 1830. Oropeza is currently teaching a course called "The History of Epidemics."

Lotz-Heumann said one of the things that has struck her during the COVID-19 pandemic is that society still relies heavily on quarantine to help slow the spread of disease.

"We are resorting to measures that have been around for a long time, at least until we get the vaccine," she said. "Our civilization is so fragile that quarantine is basically the method that we have to resort to in spite of all the scientific progress."

The Venetians relied on quarantine in the 14th century when they required that ships arriving in Venice from infected ports sit for 40 days before landing.

But records of people staying inside their homes go back even farther. The historian Procopius, in his "History of the Wars," notes that during the Justinian Plague "it seemed no easy thing to see any man in the streets of Byzantium" and "work of every description ceased." People who were healthy stayed in their houses to tend the sick or mourn the dead. The lockdown crippled the economy, mirroring current headlines, Hasaki said.

Lotz-Heumann noted that during the bubonic plague in London in the 17th century, quarantine was only required when someone in the household showed symptoms.

Samuel Pepys, a British naval administrator who kept a diary during that time wrote, "But, Lord! how sad a sight it is to see the streets empty of people."

One important difference between past pandemics and COVID-19: the hope for a vaccine.

"It's just mind-blowing to me, as a historian, that there are people who reject vaccines, because for me, vaccines and inoculations are one of the greatest medical advancements in world history," Lotz-Heumann said.

Lotz-Heumann said that in any pandemic, including today's, public perception is important.

"Perception actually drives behavior more than anything that scientists are telling us," Lotz-Heumann said. "And that to me is very sobering. To channel human perception in ways that are productive to humans as a society is actually awfully hard."

During times of fear and uncertainty, people are not always satisfied with messaging from the government and health organizations, Lotz-Heumann said. Conflicting advice, changes in medical recommendations and fluctuating risk models can add to confusion. People tend to choose information that reinforces their world view.

"I compare what we are seeing now with the start of book printing and pamphleteering in the 16th and 17th century," Lotz-Heumann said. "You could pick and choose the information that you were getting."

While social media and the internet have aided the spread of disinformation, questionable remedies and conspiracy theories have always existed, Lotz-Heumann said.

For example, in the 17th century, scientists theorized that the plague was spread through miasma, or "bad air" created by rotting organic matter, Lotz-Heumann said. Popular measures to combat the plague involved purifying the air by smoking tobacco or by holding herbs and spices in front of one's nose.

In Constantinople – modern Istanbul – in A.D. 542, speculations of the causes of plague were equally wild, Hasaki said. Procopius wrote, "They love to conjure up causes which are absolutely incomprehensible to man, and to fabricate outlandish theories of natural philosophy."

The challenge of educating people during a pandemic can be formidable.

During the cholera outbreak in Spain in the 19th century, the government produced small advice manuals, but they were aimed at the middle class, Oropeza said. Lower-income individuals, who were significantly impacted by cholera, had lower literacy rates.

"It presents a very bourgeois vision of health," Oropeza said. "Educating the population during moments of crisis was a huge problem."

Impact on the Poor

Lotz-Heumann, Hasaki and Oropeza all agree that, historically, pandemics have disproportionately impacted poor and working-class people. Minority groups also have been hit the hardest by COVID-19.

In 19th-century Spain, cholera primarily affected working-class people because of poor housing conditions, Oropeza said. Families lived in one room, water was collected from pumps on the street, and excrement was thrown out of windows.

"Always these two things are together: hunger and plague," Hasaki said. "In antiquity, these terms were one letter apart but sounded the same: limos (hunger) and loimos (plague).

"Constantinople, like modern metropolitan cities around the world, was known for its abundance in all things, from the mundane to the exotic," Hasaki said. "But the plague brought along starvation, further undermining any hope for recovery among the sick."

In terms of financial relief help from the government, Lotz-Heumann said that in early modern Europe, help was based on who was considered "worthy poor."

"Authorities decided who they regard as worthy poor in a situation where there is economic pain as a result of a contagious disease," Lotz-Heumann said. "But it also means they expect those people to do the jobs that need to be done, such as go into homes to inspect corpses and carry the infected to plague hospitals."

Pandemics often set the stage for selfish behavior, such as hoarding of necessities, and may also emphasize and exacerbate existing social divisions.

"When you see that all the rich people can leave town, whether now or in the Middle Ages, you immediately have a social divide," Lotz-Heumann said.

Historically, this divide has spiraled into blaming. Like the plague, cholera led to scapegoating, manhunts and suspicion, especially of foreigners and outsiders, Oropeza said. It led to fights and increased social tension.

"Wealthy and middle class people suspected that it was the lower classes that were breeding grounds for infection," Oropeza said.

"These are the poor people who had to be outside to beg or do whatever they had to do to make a living in order not to starve, and so they could obviously be plague spreaders," she said. "But they didn't want to be."

At the same time, examples of helpful behavior can be found in past pandemics as well as the current one.

Oropeza said that during the cholera outbreak in Spain, some physicians came out of retirement and put up their own money to help.

The historian Thucydides, who wrote about the Athenian Plague in his "History of the Peloponnesian War," remarked that the sick could find compassionate people among those who had recovered from the plague: "These knew what it was from experience, and had now no fear for themselves."

"Similarly, almost a millennium later in the Justinian Plague, people sought what connects them not what divides them," Hasaki said. "We hear that even groups in the society that previously harbored animosity towards each other set aside their differences and attended in unison burial rites of the dead."

Lotz-Heumann notes the "somewhat spectacular case of self-quarantine" during the 1665 plague in Eyam Village in Derbyshire. Instead of fleeing, the villagers decided to seal off the village, with no one allowed in or out. Although many villagers died, the quarantine helped prevent the plague from spreading to nearby areas.

"Societies have to pull together but at the same time everybody has a self-interest," Lotz-Heumann said. "I think that is a general human trait."