The Jill Corey Collection consists of press photos, reviews, correspondence, sheet music, dozens of magazines in which Corey was featured, a number of fan scrapbooks and her early financial records.
Jennifer Fitzenberger
March 10, 2011
Resources for the Media
Extra Info:

Special Collections at the University Libraries maintains collections of rare books and unique archival materials that make possible in-depth research on selected topics. The scope and diversity of Special Collections make it an important resource for the international academic community. Established in 1958 to house materials on Arizona, the Southwest, and the U.S./Mexico Borderlands, Special Collections now includes rare books, manuscript collections, photographs, and other materials in a wide variety of subject areas. For more information visit http://speccoll.library.arizona.edu. 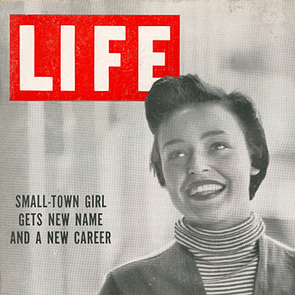 Special Collections at the University of Arizona announces its recent acquisition of the Jill Corey Collection, an important addition to the University's vast Vaudeville holdings, already lauded as the largest collection of memorabilia and artifacts of its kind in the world.

This collection offers students studying theater arts, music, film and other disciplines the opportunity to access more than a century's worth of materials that influenced contemporary entertainment and pop culture.

By the age of 14, Corey was performing with a local orchestra, earning $5 a night.

At 17, Corey recorded a demo tape, singing a cappella, accompanied only by the sound of passing trains in the background. This tape found its way to New York and into the hands of Mitch Miller at Columbia Records. He flew her to the city the next day. She signed a contract with the company and within six weeks Corey, the teenage daughter of a coal miner, was on the cover of Life Magazine. She promptly relocated to New York.

Corey went on to record dozens of popular singles, including "Love Me to Pieces," which went to No. 11 on the pop charts, as well as several compilations, including the now-rereleased album, "Sometimes I'm Happy, Sometimes I'm Blue." She also was the first to record the popular song, "Let It Be Me," which became a top 10 hit for The Everly Brothers in 1960, eventually reaching No. 7 on the Billboard Hot 100.

Starlet Corey made her TV debut as the lead singer on "The Dave Garroway Show," a Friday-night variety series (1953-54). She appeared half a dozen times on "The Ed Sullivan Show," and was a regular on Johnny Carson's landmark CBS-network comedy-variety program, "The Johnny Carson Show." She was the last featured singer on the long-running TV series "Your Hit Parade," and she also starred in the 1958 Columbia Pictures' feature-length musical, "Senior Prom."

The Jill Corey Collection consists of press photos, reviews, correspondence, sheet music, dozens of magazines in which Corey was featured, a number of fan scrapbooks and her early financial records. The collection also contains a vast digital archive of Corey's career: radio and TV appearances, interviews, performances and her commercial recordings, as well as a collection of original songs written and recorded privately and other memorabilia and ephemera from her performing days.

Regents' Professor of Classics David Soren, who worked to bring the Jill Corey collection to the UA, said, "This collection gives us a special window back in time to observe the beginnings of American television, the popularity of variety shows and the movie musical. The videos and films in this collection give an opportunity to study early television entertainment and to assess one of its brightest young stars."

In the 1950s, Jill Corey was a performer on the cusp of a new entertainment zeitgeist. Particularly popular from the 1880s through the 1930s, vaudeville shows provided a stage for performers of any stripe, grouping unrelated acts together, emphasizing quality live-performance entertainment.

With the growth of cinema, many vaudevillians moved into the movies, while others transitioned into television, where variety-programs such as "The Ed Sullivan Show" proved to be supremely popular, if not quite as democratic as early vaudeville theaters.

This popularity continues even today. Soren cites the multi-act personality-propelled format of programs such as "American Idol," "The Tonight Show with Jay Leno" and "The Late Show with David Letterman" as being heavily influenced by the Vaudeville tradition of brief variety acts featuring music, comedy and other forms of entertainment.

And of course this post-Vaudeville tradition can be traced back to Johnny Carson, who was an early proponent of Jill Corey's career, casting her as a fixture on The Johnny Carson Show (1955-1956).

The UA's acquisition of the Jill Corey Collection began earlier this year when Soren, through a series of connections, was put in touch with Corey herself.

"We communicated that the UA would be a place that would cherish the collection," he said. Corey, one of Soren's favorite singers of the 1950s, agreed to bequeath her extensive collection to the University.

The Jill Corey Collection will be a valuable addition to the American Vaudeville Museum collection, housed at the UA since early 2009. This collection, the largest of its kind in the world, contains recordings, sheet music, videos, costumes, posters and other artifacts dating back to Vaudeville's beginnings in the 1860s.

"Vaudeville was seminal to the entertainment business," said Soren, a former Vaudevillian himself, speaking to the collection's importance.

The collection, he said, "is wonderful for anyone studying theater arts, film, history, music. The sheet music archives read like a history of everything that was going on in America in the 19th and early 20th centuries."

Maurice Sevigny, dean of the College of Fine Arts, added, "Students in our five professional schools are able to go back to history for new ideas." Sevigny also hopes that owning such a prestigious collection will grow the UA's relationships with Hollywood and attract other collectors interested in donating their memorabilia.

Along with the vast American Vaudeville Museum collection, the UA houses the collections of such stars as singer Jo Stafford and Capitol Records mastermind Nelson Riddle.

The Jill Corey collection is a welcome addition. As David Soren says, "We need to know about these people. They shouldn't be forgotten lives."