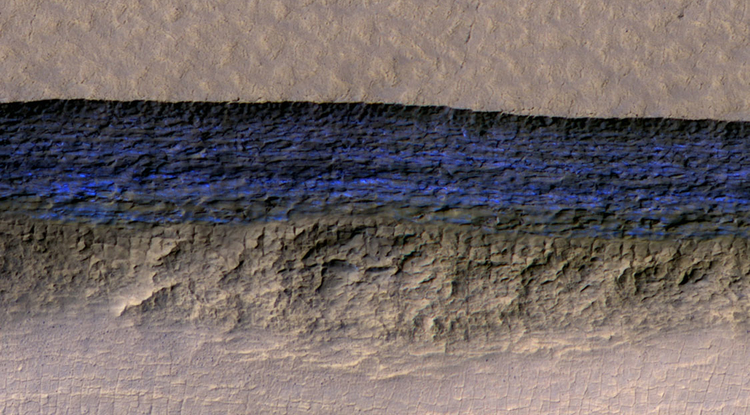 At this pit on Mars, the steep slope at the northern edge (toward the top of the image) exposes a cross section of a thick sheet of underground water ice. The image is from the HiRISE camera on NASA's Mars Reconnaissance Orbiter, with an enhanced-color central swath between grayscale on each side. (Image: NASA/JPL-Caltech/UA/USGS)

Newly discovered sheets of water ice just beneath the surface on Mars hold clues to the planet's climate history, and could perhaps even yield drinking water for future astronauts.
University Communications
Jan. 12, 2018
Resources for the Media 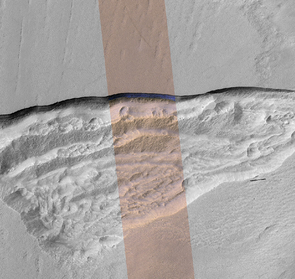 A cross section of underground ice is exposed at the steep slope that appears bright blue in this enhanced-color view from the HiRISE camera on NASA's Mars Reconnaissance Orbiter. The scene is about 550 yards wide. The scarp drops about 140 yards from the level ground in the upper third of the image. (Image: NASA/JPL-Caltech/UA/USGS)

Researchers using the University of Arizona-led HiRISE camera aboard NASA's Mars Reconnaissance Orbiter, or MRO, have found eight sites where thick deposits of ice beneath Mars' surface are exposed in faces of eroding slopes.

The ice was likely deposited as snow long ago. The deposits are exposed in cross section as relatively pure water ice, capped by a layer 1 to 2 yards (or meters) thick of ice-cemented rock and dust. They hold clues about Mars' climate history. They also may make frozen water more accessible than previously thought to future robotic or human exploration missions.

Researchers who located and studied the scarp sites with the HiRISE, or High Resolution Imaging Science Experiment, camera on MRO reported the findings on Jan. 11 in the journal Science. The sites are in both the northern and southern hemispheres of Mars, at latitudes from about 55 to 58 degrees, equivalent on Earth to Scotland or the tip of South America.

"There is shallow ground ice under roughly a third of the Martian surface, which records the recent history of Mars," said the study's lead author, Colin Dundas, of the U.S. Geological Survey's Astrogeology Science Center in Flagstaff, Arizona. "What we've seen here are cross sections through the ice that give us a 3-D view with more detail than ever before."

The scarps directly expose bright glimpses into vast underground ice previously detected with spectrometers on NASA's Mars Odyssey orbiter, with ground-penetrating radar instruments on MRO and on the European Space Agency's Mars Express orbiter, and with observations of fresh impact craters that uncover subsurface ice. NASA sent the Phoenix lander to Mars in response to the Odyssey findings; in 2008, the Phoenix mission confirmed and analyzed the buried water ice at 68 degrees north latitude, about one-third of the way to the pole from the northernmost of the eight scarp sites.

"The discovery gives us surprising windows where we can see right into these thick underground sheets of ice," said Shane Byrne of the UA Lunar and Planetary Laboratory, a co-author on the new report. "It's like having one of those ant farms where you can see through the glass on the side to learn about what's usually hidden beneath the ground."

Scientists have not determined how these particular scarps initially form. However, once the buried ice becomes exposed to Mars' atmosphere, a scarp likely grows wider and taller as it "retreats," due to sublimation of the ice directly from solid form into water vapor. At some of them, the exposed deposit of water ice is more than 100 yards, or meters, thick. Examination of some of the scarps with MRO's Compact Reconnaissance Imaging Spectrometer for Mars, or CRISM, confirmed that the bright material is frozen water. A check of the surface temperature using Odyssey's Thermal Emission Imaging System, or THEMIS, camera helped researchers determine they're not seeing just thin frost covering the ground.

Researchers previously used MRO's Shallow Radar, or SHARAD, to map extensive underground water-ice sheets in middle latitudes of Mars and estimate that the top of the ice is less than about 10 yards beneath the ground surface. How much less? The radar method did not have sufficient resolution to say. The new ice-scarp studies confirm indications from fresh-crater and neutron-spectrometer observations that a layer rich in water ice begins within just 1 or 2 yards of the surface in some areas.

The new study not only suggests that underground water ice lies under a thin covering over wide areas, it also identifies eight sites where ice is directly accessible, at latitudes with less hostile conditions than at Mars' polar ice caps.

"Astronauts could essentially just go there with a bucket and a shovel and get all the water they need," Byrne said.

The exposed ice has scientific value apart from its potential resource value because it preserves evidence about long-term patterns in Mars' climate. The tilt of Mars' axis of rotation varies much more than Earth's, over rhythms of millions of years. Today the two planets' tilts are about the same. When Mars tilts more, climate conditions may favor buildup of middle-latitude ice. Dundas and co-authors say that banding and color variations apparent in some of the scarps suggest layers "possibly deposited with changes in the proportion of ice and dust under varying climate conditions."

This research benefited from coordinated use of multiple instruments on Mars orbiters, plus the longevities at Mars now exceeding 11 years for MRO and 16 years for Odyssey. Orbital observations will continue, but future missions to the surface could seek additional information.

"If you had a mission at one of these sites, sampling the layers going down the scarp, you could get a detailed climate history of Mars," suggested MRO deputy project scientist Leslie Tamppari of NASA's Jet Propulsion Laboratory in Pasadena, California. "It's part of the whole story of what happens to water on Mars over time: Where does it go? When does ice accumulate? When does it recede?"