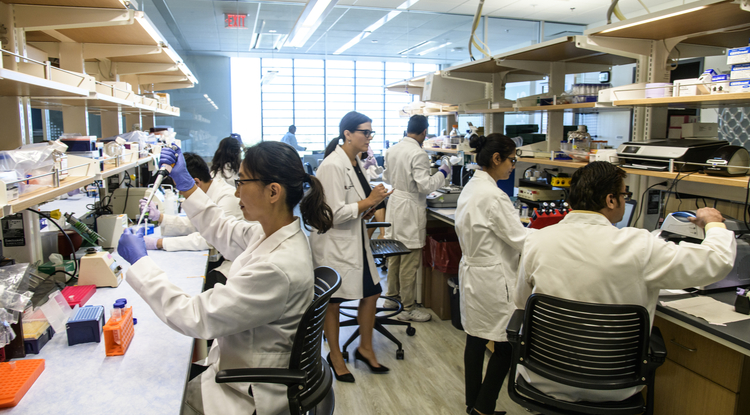 A Step Toward Better Treatments for Fibrosis

UA researchers have developed a technology that could improve therapeutic strategies for fibrotic disorders, a leading cause of death in the U.S., and licensed it to startup Fibronox.
Paul Tumarkin
,
Tech Launch Arizona
Feb. 28, 2019
Resources for the Media

Researchers at the University of Arizona have invented the first highly selective Nox4 small molecule inhibitors for the treatment of fibrotic disorders.

Through Tech Launch Arizona, the office of the university that commercializes inventions stemming from research, the UA has licensed the technology to startup Fibronox to bring the invention from the lab to the public.

Fibrotic disorders – the progressive buildup of scar tissue – can occur throughout the body: lungs, liver, heart, kidney, skin and intestines. Cardiac and pulmonary fibrosis cause scarring in the heart and lungs, cirrhosis is scarring of the liver, and scleroderma destroys multiple systems throughout the body; all are examples of how fibrotic disease can impact various organ systems.

Fibrotic disorders are typically chronic and can often be fatal. Overall, 45 percent of deaths across the U.S. each year are attributed to fibrotic disorders. Many are unaware of this shocking statistic because the cause of death in these cases is end-stage organ failure. However, organ failure and ultimately death are often a result of progressive fibrosis. As of today, there is no cure.

“We are excited to see Fibronox taking the next steps to develop this invention,” said Doug Hockstad, assistant vice president of Tech Launch Arizona, or TLA. “They have taken full advantage of what TLA has to offer startups, and we look forward to seeing the company and the technology improve the lives of those suffering from fibrosis.”

The research team at the UA College of Medicine – Tucson and BIO5 Institute has been working diligently to understand the deeper workings of these diseases. Louise Hecker, an associate professor of medicine at the UA, along with senior research scientist Vijay Gokhale and organic chemist Reena Chawla, have developed novel Nox4 small molecule inhibitors as the next step in the fibrosis fight.

Hecker and her team were the first to identify Nox4 as a unique target in mediating lung fibrosis. She has since uncovered novel mechanisms by which Nox4 is dysregulated in aging. These findings help to explain why fibrotic disorders disproportionately affect the elderly. Her research has been published in high-impact journals such as Nature Medicine and Science Translational Medicine, and has been independently validated by hundreds of studies. Today, Nox4 is considered to be among the best validated targets for fibrotic disease.

Nox4, short for NADPH oxidase 4, is an enzyme essential in generating reactive oxygen species, a core requirement to maintain homeostasis in aerobic organisms. Nox4 can become out of balance, particularly in aging, which leads to oxidative stress and ultimately fibrotic disorders.

“Fibrotic disease impacts millions of healthcare consumers,” Hecker said. “With hundreds of failed clinical trials for fibrotic disease, there is a clear need for improved therapeutic strategies. Nox4 is the major cellular source of oxidant generation, and a drug targeting Nox4 would shut down oxidant production to combat oxidative stress and stop the problem at the source.”

As they moved through TLA’s commercialization process, the Fibronox team participated in the office’s NSF I-Corps program, and was invited to represent the UA at the San Diego Innovation Showcase last fall. The startup was also selected as one of top 12 finalists nationally to present on April 23 in Cambridge, Massachusetts, at Science2Startup, an invitation-only symposium that connects world-class discoveries from leading research institutions with top biotech investors.

"Louise and the Fibronox team have put the hard work in to get this company started on the right path to success," said TLA Senior Director of Venture Development Joann MacMaster, adding that startups like Fibronox represent a great opportunity for inventors to expand the impact of their work as well as create new opportunities in the community as they grow. "This team is strong and ready to take this project forward."

Along with Hecker, who is the company’s founder and chief science officer, the Fibronox team includes Sunny Palumbo, director of pre-clinical research, and business lead Michael Sember. Gokhale will continue to serve on the company’s advisory board, along with Laurence Hurley, professor at the UA College of Pharmacy, and Kenneth Knox, M.D., pulmonary specialist and associate dean of the UA College of Medicine – Phoenix.

A version of this article originally appeared on the Tech Launch Arizona website: https://techlaunch.arizona.edu/news/startup-licenses-ua-small-molecule-inhibitor-treat-fibrosis