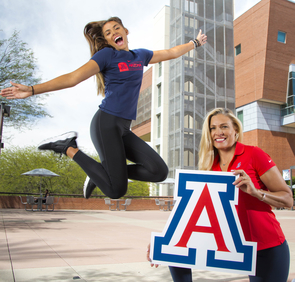 University of Arizona student-athlete Mia Mason is jumping at the opportunity to make a positive impact on children with cancer.

Mason knows firsthand what such children go through. When she was 12, she was diagnosed with a rare brain tumor, ependymoma. Thankfully, she survived. But the experience was harrowing and life-changing for her and her family.

Now, nine years in remission, Mason, who plays on the UA beach volleyball team, and her mother, Jeannine Mason, have established the Mia Mason Fund for immunotherapy research to support pediatric cancer research at the UA Steele Children's Research Center, one of the centers of excellence at the UA College of Medicine – Tucson, within the UA Health Sciences.

Immunotherapy reprograms a child's own disease-fighting cells to fight the cancer in their body. It's potentially a game-changer for children battling the disease.

Dr. Emmanuel Katsanis, professor and chief of the Division of Pediatric Hematology/Oncology, heads the pediatric cancer research team at the UA Steele Center.

"The advances we are making right now will have positive long-term effects on kids affected by cancer," Katsanis said. "The funds raised by the Mia Mason Fund will accelerate our work tremendously."

"Mia was such a healthy 12-year-old girl," she said. "She had just played three soccer matches the day before. By the next day, Mia had developed horrible headaches that were making her sick. I knew something wasn't right and immediately took her to see our family doctor."

A CAT scan revealed a mass that turned out to be an ependymoma, an extremely rare brain cancer that affects less than 200 children each year in the U.S.

"From that moment," Jeannine said, "it was a whirlwind of doctors, surgery, waiting rooms, radiation treatments, and weeks and months of recovery. We learned so much about the research that had been done that enabled Mia's doctors and radiologists to map out exactly where the radiation needed to go and what areas they needed to avoid. Only through research were they able to be so precise."

Mia's team mentality and spirit made a difference while she was in the hospital for surgery, 33 radiation treatments and endless MRIs.

"Having everybody around me — family, doctors and my teammates — supporting me through it all really helped a lot," she said. "I just wanted to be able to play again."

Said Jeannine: "If Mia had been diagnosed 10 years earlier, her outcome wouldn't have been the same. Research is the reason we've come so far. But we still have a long way to go."

For Mia, the fund is about paying it forward.

"We’re so grateful to Mia and Jeannine for creating this opportunity to support our pediatric cancer research," said Dr. Fayez K. Ghishan, director of the Steele Center. "They will truly make a positive impact on children with cancer."