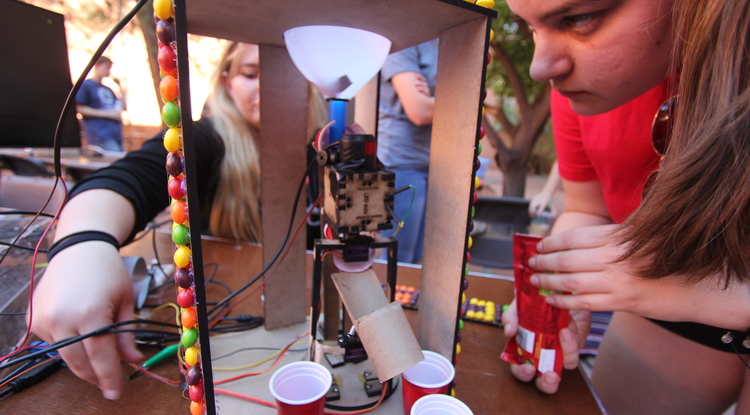 A team confirms all systems are go on its Skittle-sorting machine before the undergraduate design competition co-hosted by the UA Department of Biomedical Engineering and School of Information.

UA biomedical engineering and information school students in a new maker class showcased their gadget-design and computer-programming skills in a candy-sorting competition.
Jill Goetz
,
UA College of Engineering
June 5, 2017
Resources for the Media

"What a great way to end the semester!" she said.

Davidson was among 80 undergraduates, including 49 biomedical engineering sophomores, testing 36 Skittle-sorting machines their teams had created as part of a new design course. The challenge: to accurately sort the highest number of Skittles in the least amount of time.

The course was co-taught by Urs Utzinger, professor of biomedical engineering, and David Lesser, a UA graduate student who serves on the board of Xerocraft, a Tucson hackerspace and makerspace group. The course supported the College of Engineering's commitment to incorporating hands-on design experience into the full undergraduate curriculum. The college plans to adapt it for its other undergraduate programs.

"We started with BME, since biomedical engineers design biomedical systems and products and must be familiar with the technical processes for maintaining them," Utzinger said. Such equipment might include pill-sorting machines, which some of the Skittle sorters resembled.

The iSchool class, ISTA 303 Creative Coding, had 20 junior and senior students this past spring and was taught by Peter Jansen, an assistant professor in the School of Information.

"I designed this course to be about learning introductory rapid prototyping skills in a very hands-on way," Jansen said.

The course included a number of skill-building projects that teach aspects such as sensors and visualization to basics about robotics. The students were required to extend their projects in some way, through coding, visualization or additional rapid prototyping.

From Solar Ovens to Skittle Sorters

UA engineering freshmen take the introductory course ENGR 102 to learn fundamental concepts of modeling, design and construction. The course requires them to build solar ovens in teams, then compete to best predict their ovens' performance at the Solar Oven Throw Down. Seniors participate in a capstone engineering design program and display their sponsored projects at Design Day.

Now sophomores have the maker course, which may also be adapted for juniors.

"Five-four-three-two-one … start your Skittle sorters!" Lesser shouted before each three-minute round of four competing teams. A cacophony rose as students dumped packets of 60 Skittles into funneled hoppers and the candies cascaded down chutes for routing into one of five cups for red, orange, purple, yellow or green Skittles. Students made many of their components using 3-D printers and laser cutters. Microprocessors, servo actuators and power supplies kept the student-built machines humming.

Some teams encountered trouble with their systems for detecting the candies' colors, but the failure was a valuable lesson in itself.

Their systems worked flawlessly inside the new makerspace created for the course, but were less responsive in the natural light of the Engineering Building courtyard, where the contest took place.

"We had programmed an image-processing system into our software to identify hues in the lab, but the values changed when we took the machine outside," Davidson said.

"But isn’t that often the case?" Lesser said. "Practice sessions go smoothly, but at the crucial moment systems disappoint. It's a fact of life for professional engineers."

First- and second-place honors went to iSchool teams. Benjamin David Shields and Shlishaa Savita won first place for their sorter. Shields said their fastest round at the competition was 34 seconds for 60 Skittles with 100 percent accuracy.

"We spent a lot of time working on the code to detect Skittle colors as accurately as possible, while trying to mitigate the ambient light of the environment," Shields said. "There was an abundance of incredibly clever and powerful designs that day at the competition."

Shields, who graduated with a bachelor's degree in computer science in May, said he enjoyed the workshop style of ISTA 303.

"Peter Jansen taught us real skills that I can apply when using 3-D printers, laser cutters, building circuits and programming micro-controllers," Shields said. "It was extremely fulfilling to make tons of mistakes, learn from each and every one, and finally show friends something that you built, something that childhood Ben would never have dreamed was possible in this day and age."

Said Jansen: "The Skittle-sorting competition was a fantastic learning experience for the students. On the surface, sorting Skittles by sensing their color is conceptually straightforward. But the secret is all in the details."

Lori Harwood of the College of Social and Behavioral Sciences contributed to this story.