According to the Theory of General Relativity, objects curve the space around them. UA physicist Andrei Lebed has proposed an experiment using a space probe carrying hydrogen atoms to test his finding that the equation E=mc2 is correct in flat space, but not in curved space. (Illustration: NASA)

UA physicist Andrei Lebed has stirred the physics community with an intriguing idea yet to be tested experimentally: The world's most iconic equation, Albert Einstein's E=mc2, may be correct or not depending on where you are in space.
Daniel Stolte
,
University Communications
Jan. 3, 2013
Resources for the Media
Extra Info:

The details of Andrei Lebed's calculations are published in three preprint papers with Cornell University Library: 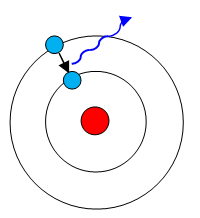 The simplest atom found in nature, hydrogen, consists only of a nucleus orbited by one electron. Lebed's calculations indicate that the electron can jump to a higher energy level only where space is curved. Photons emitted during those energy-switching events (wavy arrow) could be detected to test the idea.

With the first explosions of atomic bombs, the world became witness to one of the most important and consequential principles in physics: Energy and mass, fundamentally speaking, are the same thing and can, in fact, be converted into each other.