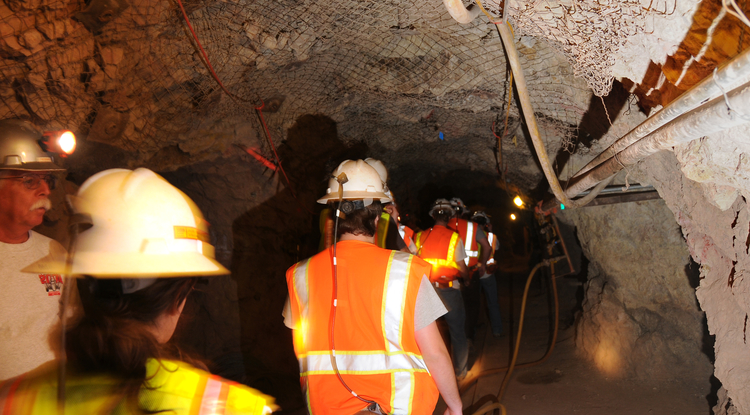 The New Face of Mining: Women Carving Out a Place in Surging Industry

The UA department of mining and geological engineering, one of only 14 U.S. schools offering mining engineering degrees and only a handful with its own student mine, is dedicated to helping fill the industry pipeline, and that includes ensuring female engineers continue to gain ground in a surging industry.
Karina Barrentine
,
College of Engineering
May 24, 2013
Resources for the Media
Extra Info:

This is the first story in a series by the UA College of Engineering about the role of women in mining.

Additional stories in this series include: 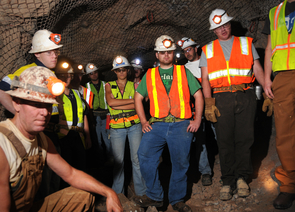 They roam the remotest corners of the world, scale the highest mountains and descend deep into the Earth.

They go places few women have ever gone. They are not afraid of getting dirty, or of much else for that matter, certainly not adversity or a good challenge. And they know, better than most, how and when to take a joke.

"I went to the deepest, darkest corners of the Earth," said University of Arizona mining engineering alum Barb Filas, who has worked on every continent except Antarctica. "I hired local experts to help with environmental impact assessments for mining projects, drove around and looked at the landscape with the most competent of tour guides, and I was paid to do it."

For years, women have been carving out a place for themselves in an industry where their exclusion likely is as old as the profession itself – but where their inclusion today is critical to meeting a shortage of skilled workers.

The Society for Mining, Metallurgy, and Exploration estimates that before the end of the decade, the mining industry, where women now make up about 13 percent of the workforce, will need 128,000 skilled workers to replace retirees and fill new jobs, and more than half the workforce will be retired and replaced by 2029.

"There is a shortage of engineers in the industry right now," said recent UA graduate Bree McMaster, "and mining companies are trying to fill in the gaps and train up people fairly quickly so they can take on senior positions."

The UA department of mining and geological engineering, one of only 14 U.S. schools offering mining engineering degrees and only a handful with its own student mine, is dedicated to helping fill that pipeline, and that includes ensuring female engineers continue to gain ground in a surging industry.

"I worked on a research project several years ago to teach science, engineering and math to girls in Girl Scouts. When we started the program, we asked the girls to draw pictures of what they thought engineers looked like. They mostly drew pictures of men driving trains," said UA Distinguished Professor Mary Poulton, mining and geological engineering department head and director of the UA Lowell Institute for Mineral Resources.

"When we finished the program, they drew pictures of themselves. It is easier to imagine yourself doing a job if you see others who look like you doing the job."

Veteran Filas, who followed her father and grandfather into mining, was an anomaly when she graduated in 1978, and by most accounts, she was a rarity when she semi-retired in February 2013. Yet, in her 35-year climb from the underground coal mines of Illinois to the boardroom of a global mining firm, she has seen more change than she ever imagined.

"When I graduated, there were no women in front of me," said Filas. "There were a few women working in the mines, but none in engineering and certainly none at the corporate level."

Nowadays mining boots come in women's sizes, and most mine sites have women's change rooms. Technological advances are helping ease some of mining's brute-force image, and safety precautions have been greatly improved. Industry leaders understand that greater inclusion of women in mining jobs is imperative to sustaining the workforce, and they are committed to fostering a more gender-friendly work environment.

Female mining and geological engineers are involved in every stage of mining operations – from discovering mineral deposits and drilling for core samples; analyzing the ore and assessing mineral worth to managing equipment and people; setting explosives; and overseeing environmental impact, health and safety, mine design, and reclamation of mine sites.

There still can be pockets of lingering intolerance associated with women in the industry, but that would be the case in any traditionally male industry, said Ruby Barickman, also a recent UA mining engineering graduate. Barickman spent a summer interning at a coal mine in Alabama and reported that some old-timers underground definitely did not think women should be in mines; in fact, they believed having women underground was bad luck.

"But by the end of the summer, once everyone knew me, they were a little more comfortable with the idea of a woman in the industry," said Barickman, adding that a sense of humor is vital in any new work environment.

"No matter who you are, anyone new on the job has to have thick skin," she said. "You have to be able to laugh at yourself and joke around with the people you are working with."

Women are scarce in the executive ranks, though some do hold leadership positions, especially with smaller companies, and about 5 percent of board positions in the top 500 mining companies are held by women, according to recent industry reports.

More often than not, however, women still find themselves forcing down the corporate door, said Filas. Knight Piésold and Co., a global engineering and environmental consultancy, was looking outside the firm for a successor for president of U.S. operations when Filas walked into the chief executive's office with her 20-plus years of progressively responsible experience and announced that there was no need to hire from outside; she would take the job.

'It had just never occurred to him that I could fill that leadership role," she said, "but he got used to the idea quickly and was happy to promote me."

Because of the advancement of people like Filas, younger women in the industry now see potential where once there were closed doors. "There are so many more women in mining management positions," said Allison Hagerman, a member of the UA women's mine rescue team who is set to graduate in May 2013. "So much has changed."

Recent graduate McMaster, who is with Barrick in Nevada, was a nursing major when she fell into mining engineering. She was taking math classes for fun when she decided to take an introductory engineering course and was invited to visit the UA San Xavier student mine. Without that invitation, she doesn't think she would have learned about the University's mining program.

"Now I know I was always meant to be underground," said the former president of the UA student chapter of the Society for Mining, Metallurgy, and Exploration.

McMaster, Barickman and their fellow female graduates – four in their class of 2012 – say it is the lack of the public's knowledge and awareness about the importance of mining, even though society depends on minerals pulled from the ground in every facet of life, coupled with the public's negative perception of mining, never mind that in recent years the mining industry has undergone myriad social, environmental and technical advancements, that keeps more women from entering the field today.

"Getting people into the industry is really just about exposure," said Barickman.

Perhaps most importantly in today's economy, recent mining and geological engineering graduates are all certain about one thing: They are cashing in on a career with a big future.

"We don't have to look for jobs; they come to us," said McMaster, who has convinced her brother, a business major, to consider working in the mining industry.

It's true, said Vicki Seppala, a returning student who graduated from the UA in 1994 with a degree in geological engineering and went on to serve as the first female mine manager in Chile.

"There is a lot of demand for talent in our industry right now. We are looking for talented people, period."

Said Filas: "Maybe women did have to jump a little higher and work a little harder to get past the preconceived notions about women in mining, but these days it doesn't matter so much whether you are male or female. Success comes from hard work and not a whole lot else."

More change may well be on the way as more and more women enter mining, it gets in their blood, and they stay.

McMaster, who works four days a week and has a three-day weekend, says her company is very family oriented. Still, as she contemplates starting her own family someday, she is looking forward to a time when she is more established and shared jobs and part-time employment create even shorter workweeks. Perhaps she won’t have to wait long. As the industry becomes increasingly more automated, and women continue to enter the workforce, "there will be more discussion about work-life balance," said Seppala. "I believe it will be addressed."

All of the UA women in the industry, whether they graduated 35 years ago or in 2013, prefer to be known for the job they do, not for the number of X chromosomes they have.

"I don't think being female makes you special, and it really bothers me when people point it out because it shouldn't matter at all," said Rita Riggs, a 2010 UA mining and geological engineering graduate and the first female to have served as mine manager at the San Xavier student mine. "It is about hiring the best people, people who are going to create safe and efficient mines."

In a world where there are many firsts still to come for women and where women likely will always be known, at least in the company of one another, as "the girls," the future seems bright for those with the gumption to buck tradition, the spirit to dig deep and get through the rigorous training, and the conviction to roll up their shirt sleeves and help get the job done.

"The success of women in the mining industry will attract more and more women to the profession," said mining and geological engineering department head Mary Poulton, "and the public benefits from that as much as the industry."