The Work of Endowed Chairs

Nearly 70 faculy and researchers at the UA have received donor-supported endowed chairs, but what do they do?
La Monica Everett-Haynes
,
University Communications
March 7, 2008
Resources for the Media
Extra Info: 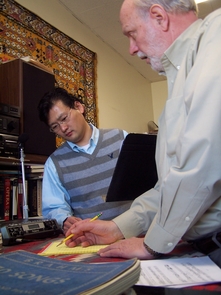 Roe, who holds an endowed chair, works with several students, including Eun Pa Lee, who enrolled at the University because he wanted to study alongside Roe. 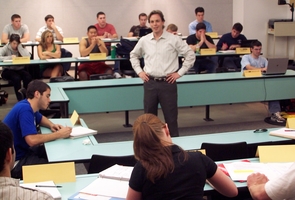 Stephen W. Gilliland heads the Eller College's department of management and organizations and has studied managers and their interactions with employees. Gilliland said his endowed chair has given him a sense of "prosperity." 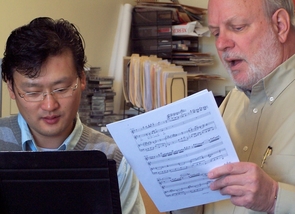 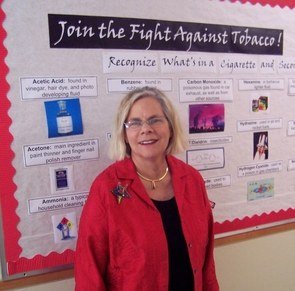 Kris Bosworth, who heads the UA's Educational Leadership Program, is known nationally for her research and works with schoolteachers and administrators to implement prevention programs.

The existence of competitive, donor-supported endowed chairs on a university campus has traditionally been upheld as a mark of academic greatness.

Such highly coveted chairs, which require a $1 million contribution to be established at The University of Arizona, reward faculty who are considered among the most accomplished in their respective fields.

UA President Robert N. Shelton has said establishing more endowed chairs is important for the University. Already during the current fiscal year, UA supporters have established three new chairs – one in the School of Dance, another in the College of Engineering and one in the Eller College of Management – and others are being planned.

Unlike general donations, funds for an endowment are placed in a fund where the principal remains untouched while generating interest. Over time, that interest is provided to the faculty member as a salary boost or for spending on travel, research projects, new programming and to support students in their education.

“Endowed chairs for faculty provide resources to retain our very best academics and to compete nationally for talent,” said College of Education Dean Ronald W. Marx, whose college has one endowed chair. “Through faculty endowments we can leverage state funds, which are often inadequate to attract and retain the very best faculty.”

Chair holders at the UA have worked to improve the effectiveness of drug therapy against cancer, tested new asthma treatments, promoted wellness in underserved communities, taught the community about economics, trained managers and promoted international agriculture, among other things.

Such efforts serve as examples of ways the UA contributes to improving the lives of people livin gin Arizona and around the globe, which Shelton has said is a Univerisity priority.

Often, an individual, corporation or a foundation will establish an endowed chair in the memory of someone who has passed or to support a specific type of research.

They include Charles R. Roe, Kris Bosworth and Stephen W. Gilliland – faculty who have used their donor-sponsored positions to help students in music studies, initiate substance abuse prevention initiatives and teach students about the value in managerial leadership and ethical practices.

Two days after competing in the Opera Guild of Southern Arizona’s “Quest for the Best” vocal competition, Eun Pa Lee was standing at the piano in Charles R. Roe’s office.

Lee had won a top award, but in that moment, it seemed the recent win was distant history.

Roe, artistic director of the UA’s Arizona Opera Theater, gently encouraged his pupil to fine tune his voice, urging Lee to roll his tongue slightly more – but not too much – to dig deep into the core of his frame to find the right sound.

Lee quickly made annotations on his sheet music the moment Roe would offer a calm, but direct suggestion or a “repeat, repeat” command.

It’s the vocal details and the ability to command one’s voice that brings fame to any virtuoso performer. Roe, the Amelia Rieman Chair in Opera, knows this quite well.

A trained baritone who has more than three decades of teaching behind him, Roe has performed as a soloist and in other leading roles at the New York City Opera, Carnegie Hall and numerous other locations in United States, Mexico, Europe and Korea.

In fact, Lee, a doctoral degree-seeking student from Korea, said it was because of Roe that he chose to study at the UA. Other students who had worked alongside Roe have gone to win national awards and perform for symphony and opera powerhouses, such as the Metropolitan Opera. It is because of his donor-supported chair position that Roe is able to do much of his work and support his students.

Toward the end of the 1980s, Roe convinced Amelia T. Rieman, a longtime supporter of the University, to invest in the UA’s opera program. She obliged, founding the Amelia Rieman Chair in Opera in 2000 with a contribution of more than $1 million to provide Roe with extra funding for his salary and also to provide students with scholarships to fund their education, to perform and compete.

“It helps to be able to go to a contest, or to be able to audition for an opera program. It allows students to gain experience and make contacts,” said Roe, who has maintained his friendship with Rieman.

“I don’t think we could have come this far without her,” he said of Rieman. “She’s always shown an interest in helping young singers. She’s our angel – that’s what we call her – and we will be forever grateful.”

Kris Bosworth focuses on changing school climate because schools are in a unique position to buffer students from risky behaviors and to promote healthy development.

“Schools are in a better position to know what is happening with youth,” she said, adding that given the amount of time teachers spend with their students, they can readily notice behavioral and mood changes.

In September, the Substance Abuse and Mental Health Services Administration released a report that indicated that both illicit drug use and smoking among children age 12 to 17 had dropped during a period between 2002 and 2006. However, the report found that underage drinking had not changed during the same time period, and the misuse of prescription drugs had increased slightly.

What Bosworth has discovered is that schools are most effective when administrators and teachers can create a safe learning environment and incorporate prevention programs that educate students directly – but also while involving the outside community.

This proves to be a difficult task, as schools are already dealing with overwhelming to-do lists, said Bosworth, who also heads the UA’s Educational Leadership Program.

That’s why she has spent much of her time developing software programs and schoolwide projects to help educators, in somewhat of a consulting role, to make stronger prevention messages a larger part of their teaching.

Bosworth has authored video-based and other multimedia programs meant to educate youths about substance abuse, violence and other risky behavior, earning recognition from the American Medical Association, the National Congress on Adolescent Health and the Center for Substance Abuse Prevention.

Later this month, she will be presenting at the American Educational Research Association's meeting in New York with a UA graduate student. The two will speak about student and teacher perceptions of safety of their school after finding that perceptions were not tied to standardized test scores or economic conditions in the surrounding neighborhood.

A great deal of Bosworth's work is the direct result of having the Lester L. and Roberta D. Smith Endowed Chair in Prevention and Education, which marked its 10-year anniversary this year. Bosworth said her chair has enabled her to be more actively involved in outcomes, especially in her work with southern Tucson-area districts through two federal Safe Schools/Healthy Students grants.

In another project that is now in its second year, Bosworth meets with principals on a model she worked to develop with local and national prevention experts.

Called the “protective schools” model, it helps educators complete a comprehensive assessment of a school’s protective factors, such as vision, leadership, academic programs, relationships with the community and data-driven decision-making.

She has worked with about five school districts and presents the model in a “book discussion group."

Bosworth said that, through an assessment, educators can determine what strengths they already have, and where they can improve.

Lester Lewis Smith, who died in November 2003, founded The Smith Foundation, which supported efforts to curb substance abuse among youth and teenagers. He established the UA chair in 1998 with a focus on substance abuse prevention and other concerns, such as suicide.

The endowed chair has “allowed me to shift my focus from trying to change the individual to changing the school climate,” said Bosworth, who also teaches a course focused on exploring ways that administrators can change school climate and infuse proactive prevention programs.

“That’s what Lester wanted. He wanted somebody out there working to get the information out and felt we should be creating change,” Bosworth said. “He wanted someone who would serve the community, not just someone who was going to sit in an office. That’s what I love doing.”

It’s happened to most all of us as job-seekers.

You update your resume and perhaps even buy a new suit. Then, you go over the top 10 most popular interview questions to prepare for that all-important discussion.

You know a number of candidates are vying for the same position, but the interview goes so well you leave with a full-on burst of confidence.

Then you never hear back from the interviewers. Why not even a courtesy call?

“I have found that even when a short rejection letter is offered saying who got the job or why there is a hiring freeze tends to make people feel better,” said Stephen W. Gilliland, who heads the UA’s department of management and organizations.

But that is not generally how managers think, he added, saying that “there is this misperception that information is ammunition.”

But Gilliland’s research has shown the opposite.

He has spent the last 20 years studying the culture of organizations and has led research looking at ways drug tests are used, the decision-making of human resource officers, the interactions between supervisors and employees and how those relationships affect customer service.

Gilliland, who holds the Arnold Lesk Chair in Leadership, suggests that in the real world of employer-employee relations, everything has to do with fairness. That’s the very subject he is teaching his undergraduate students, the next crop of business leaders.

“I am interested in people,” said Gilliland, who earned both his master’s and doctoral degrees in industrial and organizational psychology.

Hence the significance of his research and his efforts to instill the value of fairness in his students.

Entrepreneur and philanthropist Brian Lesk in 2005 established the chair in his father’s name with a $1.5 million commitment. The chair’s focus is in “developing leaders will the skills and knowledge to champion the merger of technological innovation and market opportunity.” Gilliland said the chair enables him to conduct “unique” research.

“It’s the kind of research that a grant probably wouldn’t fund because it’s considered softer science,” said Gilliland, who has also used the endowment to travel to conferences and to support doctoral degree seekers.

“The chair has almost provided a sense of prosperity. I think I am able to provide better teaching as a result,” he said. “It provides me with a level of freedom. In a way, it makes it feel like I’m at a private school.”