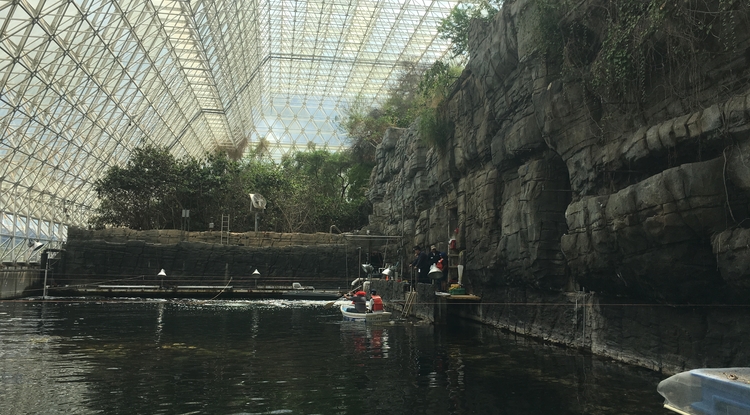 Ten students from Japan and Arizona gathered for the first official Space Camp at Biosphere 2, where they designed Biosphere 3 to sustain life on Mars.
Mikayla Mace
,
University Communications
Aug. 14, 2019
Resources for the Media 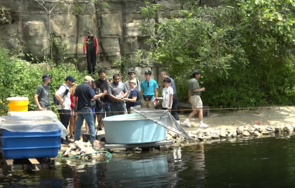 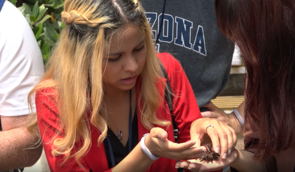 From the depths of the ocean’s trenches to the most tenuous heights of the atmosphere and everything in between, Biosphere 1 encompasses all life on Earth. The University of Arizona’s Biosphere 2 is the world’s largest earth science laboratory, housing seven model ecosystems dedicated to the research of global scientific issues. Today’s students, and the next generation of interplanetary explorers, have imagined what Biosphere 3 will become on the surface of the Red Planet.

Ten undergraduate students – five from Kyoto University in Japan and five from colleges across Arizona, including one from the UA, gathered for the first official Space Camp at Biosphere 2, held Aug. 5-10. The summer camp was jointly organized and run by researchers from Kyoto and the UA.

At Biosphere 2, the students participated in hands-on research in the facility’s diverse ecosystems including the rainforest, ocean and desert biomes. They also attended lectures by faculty from both universities and three NASA and JAXA astronauts – Richard Linnehan, Kimiya Yui and Takao Doi – about their training and experiences in space.

The activities generated discussion about how to translate lessons learned from the Biosphere 2 closed system for human life support on Mars.

“We worked together to plan Biosphere 3,” said Daniel McConville, a UA sophomore majoring in materials science and engineering.

McConville plans to someday become an astronaut and use the education and experiences he gained at the UA and Space Camp to pursue a career in space development. He hopes to be part of teams that construct bases on the moon and Mars.

“This is a unique opportunity for us to partner with researchers from Japan who have experience on the International Space Station, leverage the expertise the UA has with planetary exploration and conduct research in Biosphere 2,” said John Adams, deputy director of Biosphere 2. “Many researchers have the strong belief that an extended stay in space needs to be balanced between bioregegenerative life support systems and traditional mechanical devices, not just one or the other. The Biosphere is a great place to have those conversations and discuss lessons learned here with the students.”

Students were broken up into five groups of two students from both countries. The first team analyzed the geology of Mars to understand resource availability and select a construction site; The second team focused on developing food production techniques to last 50 years for 10 astronauts; The third, which included McConville, designed the human habitat.

The fourth group developed ways to monitor and mitigate harmful radiation. The fifth analyzed student mental and physical health while inhabiting a closed environment for a long period of time. They measured stress levels and recorded vital signs using Fitbits, among other observations.

After a long week of exploring Biosphere 2, the students presented their plans for Biosphere 3. Many were based on lessons learned from the first group of Biospherians that emerged from their sealed excursion more than 25 years ago.

“Biosphere 2 has been running ecosystems for nearly 30 years, which has never been done,  Doi said. “Biosphere 2 is not perfect, but we can learn a lot.”

Radiation will be one of the biggest hurdles to space exploration.

“We don’t know if we can even achieve migration to Mars. Even traveling is dangerous and nearly fatal. It’s an expensive problem to overcome,” said Yosuke Yamashiki, a professor at Kyoto University.

As an exercise, the students calculated the radiation dosage in different parts of the biosphere under different conditions. Yamashiki suggested building Biosphere 3 with the ocean on top; A meter of water can be protective against harmful rays.

Another major issue facing the original Biospherians was figuring out how to sustain nutritionally sufficient diets. To avoid some of the same pitfalls, the students decided to incorporate aquaponics, a system of growing crops in water containing fish to cycle nutrients.

Diana Ramirez, an Arizona State University senior majoring in microbiology, drew inspiration from the desert: “Mesquite bean pods have protein and cactus can be eaten,” she said. Desert plants could be used as water-efficient crops.

Future explorers will also have to balance carbon dioxide and oxygen levels in a closed ecosystem, which was a struggle for the original crew sealed within the glass and steel.

“We can’t replicate life-sustaining systems if we don’t first fully understand earth systems,” said Katie Morgan, manager of marine systems at Biosphere 2. “I also believe that the tech we develop for Mars should also help us on Earth.”

Another problem will be energy consumption: “Biosphere 2 also uses a lot of energy,” McConville said. “Solar might be the best way to power Biosphere 3, but there are limitations like weaker sunlight. We also considered nuclear power.”

Dust will also be a major issue for those living on Mars. Martian soil can potentially be carcinogenic and damage electronics in Biosphere 3. The students researched a suit-docking station concept, so the suits (and dust) never have to enter the facility.

McConville said another consideration is the cost of launching building materials to the Red Planet. The students decided they’d send robots ahead of humans to 3D print as many structural components as possible. Explorers from Earth would then follow with additional materials to make the structure airtight. The facility should be lit with lightweight, energy efficient LED bulbs as well as fiber optics to direct in sunlight when windows might be scarce, McConville said. Additionally, air and water recycling systems were inspired by the International Space Station’s closed system.

“A balance between biological and mechanical systems to create a truly self-sustaining environment has not been done yet,” Adams said. “Space Camp has provided an overview of these topics. It’s the initial insight as they further their studies.”

For many of the students, the best part was interacting with real NASA and JAXA astronauts. While McConville and many others wanted to be astronauts since childhood, Ramirez didn’t dream of venturing into space. She has since changed her mind.

“The astronauts said I should go up there and that my skills will be needed. Now, all I want is to go to space,” Ramirez said.

Yusaku Miyashita, a Kyoto student, has wanted to be an astronaut since he was a kid. He is studying to be a medical doctor and believes space medicine is a necessary field of the future.

“The people who will explore Mars by the 2030s are now students,” said Takao Doi, a Kyoto University professor and former astronaut. He traveled to space in 1997 and again in 2008, spending a total of 32 days in space.

In recent years, he’s decided to promote human space exploration, he said. He came up with the idea for the space camp in 2017.

“As a university, we were already thinking about future Mars missions. We have the land but not the facility. It’s too expensive. We decided: Don’t build, collaborate instead,” said Yamashiki.

Ramirez enjoyed working with international students with a diversity of majors. She believes one of the most important aspects of the camp is the interdisciplinary work.

“We need a mix of sciences in space,” she said. “We all referred to each other with questions during discussions and had the dynamics of a cohesive crew.”

Nearly 50 students from Arizona and over 40 students from Japan applied to the program, according to Michelle Coe, Arizona/NASA Space Grant Consortium manager who coordinated the student selection process. The selected Arizona students come from a diverse pool of majors, demographics and colleges, she said.

Space missions will have to be an international effort, Doi said. In the future, he hopes to incorporate more students from more countries.

Kyoto University ran Space Camp for the past two years in Japan, and this year, they partnered with Biosphere 2 to facilitate and expand the program. Doi and his team will receive additional funding from the Ministry of Education, Culture, Sports, Science and Technology of Japan and continue Space Camp at Biosphere 2 in 2020 and 2021, he said.

“A lot of applicants had outstanding letters of recommendation and high grade point averages, but what made the selected students stand out,” Coe said, “was that each of them talked about getting to work with a different community of STEM (science, technology, engineering and math) scholars, which I thought was important, and also talked about their visions for the future.”

The UA Department of Hydrology and Atmospheric Sciences, UA Lunar and Planetary Laboratory, Biosphere 2 and the Kyoto University Unit for Synergetic Studies for Space, as well as the Graduate School of Advanced Integrated Studies in Human Survivability of Kyoto University, were responsible for the camp.