Trouble on the Horizon for GM Crops? 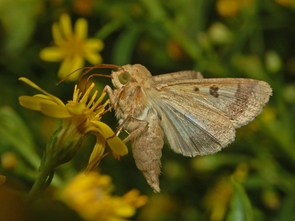 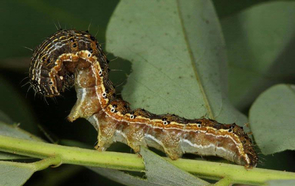 Caterpillars of the cotton bollworm, Helicoverpa armigera, feed on many different plants and pose a serious threat to cotton farming. (Photo by Gyorgy Csoka)
Bruce Tabashnik, head of the UA department of entomology, works with Chinese scientists on monitoring and countering pest resistance to genetically engineered crops, which have drastically reduced insecticide sprays. (Photo by Beatriz Verdugo/UANews)

Resistance of cotton bollworm to insect-killing cotton plants involves more diverse genetic changes than expected, an international research team reports in the journal Proceedings of the National Academy of Sciences.

To decrease sprays of broad-spectrum insecticides, which can harm animals other than the target pests, cotton and corn have been genetically engineered to produce toxins derived from the bacterium Bacillus thuringiensis, or Bt.

Bt toxins kill certain insect pests but are harmless to most other creatures including people. These environmentally friendly toxins have been used for decades in sprays by organic growers and since 1996 in engineered Bt crops by mainstream farmers.

Over time, scientists have learned, initially rare genetic mutations that confer resistance to Bt toxins are becoming more common as a growing number of pest populations adapt to Bt crops.

In the first study to compare how pests evolve resistance to Bt crops in the laboratory vs. the field, researchers discovered that while some the of the lab-selected mutations do occur in the wild populations, some mutations that differ markedly from those seen in the lab are important in the field.

Caterpillars of the cotton bollworm, Helicoverpa armigera, can munch on a wide array of plants before emerging as moths. This species is the major cotton pest in China, where the study was carried out.

Bruce Tabashnik, head of the department of entomology at the University of Arizona College of Agriculture and Life Sciences, who co-authored the study, considers the findings an early warning to farmers, regulatory agencies and the biotech industry.

"Scientists expected the insects to adapt, but we're just finding out now how they're becoming resistant in the field," Tabashnik said.

To avoid surprises, researchers have exposed cotton bollworm populations to Bt toxins in controlled lab experiments and studied the genetic mechanisms by which the insects adapt.

"We try to stay ahead of the game," he said. "We want to anticipate what genes are involved, so we can proactively develop strategies to sustain the efficacy of Bt crops and reduce reliance on insecticide sprays. The implicit assumption is what we learn from lab-selected resistance will apply in the field."

That assumption, according to Tabashnik, had never been tested before for resistance to Bt crops.

Now for the first time, the international team gathered genetic evidence from pests in the field, enabling them to directly compare the genes involved in the resistance of wild and lab-reared populations.

They found some resistance-conferring mutations in the field were the same as in lab-reared pests, but some others were strikingly different.

"We found exactly the same mutation in the field that was detected in the lab," Tabashnik said. "But we also found lots of other mutations, most of them in the same gene and one in a completely different gene."

A major surprise came when the team identified two unrelated, dominant mutations in the field populations. "Dominant" means that one copy of the genetic variant is enough to confer resistance to Bt toxin. In contrast, resistance mutations characterized before from lab selection are recessive – meaning it takes two copies of the mutation, one provided by each parent, to make an insect resistant to Bt toxin.

"Dominant resistance is more difficult to manage and cannot be readily slowed with refuges, which are especially useful when resistance is recessive," Tabashnik said.

Refuges consist of plants that do not have a Bt toxin gene and thus allow survival of insects that are susceptible to the toxin. Refuges are planted near Bt crops with the goal of producing enough susceptible insects to dilute the population of resistant insects, by making it unlikely two resistant insects will mate and produce resistant offspring.

According to Tabashnik, the refuge strategy worked brilliantly against the pink bollworm in Arizona, where this pest had plagued cotton farmers for a century, but is now scarce.

The dominant mutations discovered in China throw a wrench in the refuge strategy because resistant offspring arise from matings between susceptible and resistant insects.

He added that the study will enable regulators and growers to better manage emerging resistance to Bt crops.

The current study is part of a collaboration funded by the Chinese government, involving a dozen scientists at four institutions in China and the U.S. Yidong Wu at Nanjing Agricultural University designed the study and led the Chinese effort. He emphasized the importance of the ongoing collaboration for addressing resistance to Bt crops, which is a major issue in China. He also pointed out that the discovery of dominant resistance will encourage the scientific community to rethink the refuge strategy.

Tabashnik said China is the world's top cotton producer, with about 16 billion pounds of cotton per year. India is number two, followed by the U.S., which produces about half as much cotton as China.

In 2011, farmers worldwide planted 160 million acres of Bt cotton and Bt corn. The percentage of cotton planted with Bt cotton reached 75 per cent in the U.S. in 2011, but has exceeded 90 per cent since 2004 in northern China, where most of China's cotton is grown.

The researchers report that resistance-conferring mutations in cotton bollworm were three times more common in northern China than in areas of northwestern China where less Bt cotton has been grown.

Even in northern China, however, growers haven't noticed the emerging resistance yet, Tabashnik said, because only about 2 percent of the cotton bollworms there are resistant.

"As a grower, if you're killing 98 percent of pests with Bt cotton, you wouldn't notice anything. But this study tells us there is trouble on the horizon."