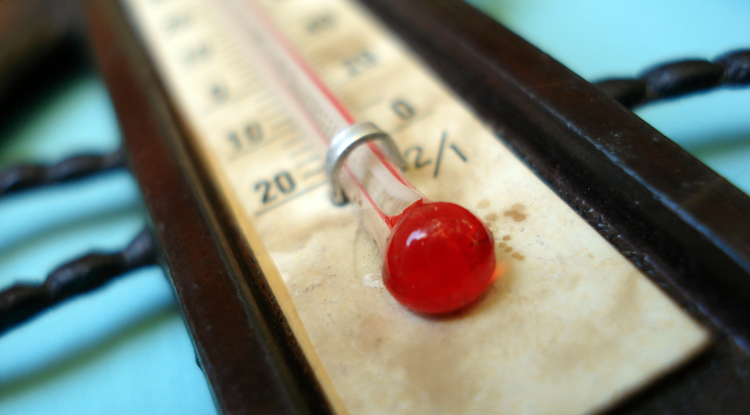 Turn Up the Heat to Turn Down Depression? 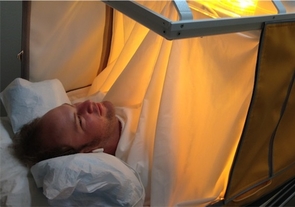 Study participants will spend two-and-a-half hours in a hyperthermia chamber to determine if heating the body has an antidepressant effect.
Dr. Charles Raison

Researchers at the University of Arizona are recruiting patients for a study exploring how heating up the body might help treat severe depression.

Led by Dr. Charles Raison, a UA associate professor of psychiatry and member of the UA's BIO5 Institute, the study will examine the use of whole-body hyperthermia as an alternative treatment for depression. The work will build on Raison's existing research, suggesting that increasing a person's core body temperature may have antidepressant effects.

"We've known for a long time that the brain affects the body – that how you think, how you feel can change how your body functions," said Raison, also the Barry and Janet Lang Associate Professor of Integrative Mental Health at the UA's John & Doris Norton School of Family and Consumer Sciences. "I have been interested for years in the opposite, which is the impact that the body has on the brain."

His interest in the relationship between body temperature and mood emerged from his study of Tibetan Buddhist monks living in the Himalayas. He was intrigued by the monks' tummo meditation practice, in which they use specialized breathing techniques to increase their body temperature.

"There have been some scientific studies that show they can raise the temperature of their hands and feet by 15 degrees through their meditation," he said.

"I was very interested in studying these guys, and because of that interest I discovered that the pathways involved in how the body regulates heat – or thermoregulation, the ability of the brain and the body to maintain a normal body temperature – are the same pathways involved in depression," Raison said. "Serotonin, norepinephrine, dopamine – all these chemicals that we think of as depression chemicals are also thermoregulatory chemicals."

As it turns out, in depressed people, something seems to go awry in the thermoregulation process, Raison said. For example, research has shown that depressed individuals often have elevated core body temperatures but don't sweat as they should to cool the body down.

Knowing this, Raison suggests that just as inflammation in the body can contribute physically to depression, so might a flawed thermoregulation process.

"Maybe some people are depressed not just totally because of their brain – maybe it's in their skin; their skin is sending some wrong signal to the brain," he said.

In his new study – funded by grants from the Depressive and Bipolar Disorder Alternative Treatment Foundation and the Brain and Behavior Research Foundation, formerly NARSAD – Raison is exploring the effectiveness of heating up the body in order to essentially "reset" the body's thermostat.

The practice has been shown to have antidepressant effects in animal studies as well as human studies conducted under Raison's direction in Switzerland, the results of which will be published in a forthcoming issue of the American Journal of Psychiatry.

"It looks like heating the skin activates serotonin nuclei that produce an antidepressant effect and turn on the body's 'air conditioning system,' so the body temperature ultimately drops following treatment," Raison said.

To learn more about the potential of using hyperthermia to treat depression, Raison and his colleagues at the UA are recruiting medically healthy but depressed individuals for study. Those individuals should not be on antidepressant medications or be willing to go off of them.

This study examines how whole-body hyperthermia affects participants' depressive symptoms, stress and immune systems, and sleep, as well as whether improving depression changes how they relate to other people.

Among the researchers' questions: How effective is the treatment at making a depressed person feel better? What pathways in the body cause the change? And how long do the effects of a single treatment last?

Participants in the study lie in a tent-like "hyperthermia chamber" that covers the entire body, excluding the head, for a single two-and-a-half-hour session.

Researchers assess participants' behavior, sleep patterns and self-reports of mood before and in the six weeks following treatment.

If shown to be successful, it could open the door for new types of depression treatments, Raison said.

"Right now, the vast book of biological treatments for depression are medications," Raison said. "A medication has specificity for the chemical that it affects, but it doesn't have specificity for where it affects those chemicals, so serotonin reuptake inhibitors, like Prozac or Paxil, block the reuptake of serotonin, but they block the reuptake of serotonin everywhere, not just in the brain. We think that's why antidepressants have so many side effects and why they have limited effectiveness, and it may also explain why they take so long to work."

"One of the reasons hyperthermia may work quicker is it may activate serotonin in ways that antidepressants eventually do, but it doesn't take weeks to do it."