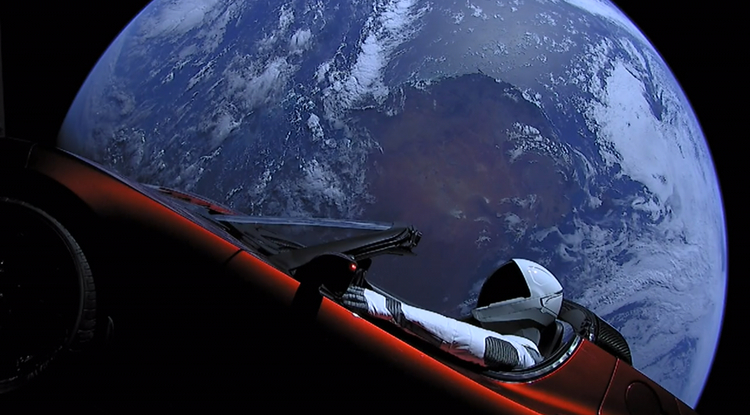 The Tesla Roadster and its mannequin passenger, Starman. This image was captured by cameras onboard the vehicle. (Image: SpaceX)

Earlier this month, the Falcon Heavy rocket successfully launched a Tesla Roadster into orbit around the sun. In the days following the launch, University of Arizona astronomers pointed their telescopes toward the car as it sped through space.

Telescopes operated by UA's Catalina Sky Survey, or CSS, were among the first to spot the Roadster, which was given the official designation of 2018-017A. Their observations immediately were submitted to the Minor Planet Center, an organization that determines the orbits of small astronomical objects such as asteroids, comets ... and the Roadster. Once the orbit of the Roadster is known, the CSS researchers can determine where it will be at any given time.

"It's the natural asteroids we are seeking to discover, not artificial satellites, but we still must know where the artificial objects are," said CSS senior research specialist Greg Leonard. The Roadster will be added to CSS' list of man-made objects so that in the future, astronomers will not mistake the car for a never-before-documented asteroid.

CSS' mission is to discover and catalog near-Earth objects. An important aspect of the mission is to identify objects that pose potential impact threats to Earth. Because the Roadster was launched from Earth, its orbit intersects Earth's. The car might come crashing back to Earth one day, or it might be nudged into an orbit that keeps it far away from Earth.

"One of the challenges of predicting the impact is that we don't know the orbit really well right now," said Eric Christensen, lead investigator for CSS. "We've only been able to observe it for a week or so."

What astronomers do know is what the Roadster will not do.

"It's not going to behave like an asteroid," Christensen said.

Astronomers have well-developed models that can be used to determine the paths of near-Earth asteroids or man-made spacecrafts, but the Roadster is an object that had not traveled through space before. No astronomer has ever had to predict how a car orbits the sun.

"Did they deflate the tires? Is air going to leak out and cause some strange thrusts? We don't know," Christensen said.

The sun also might move the Roadster onto a different course. The car is not heavy when compared to large asteroids, so radiation from the sun can push it around. Objects absorb light from the sun and re-emit this light as heat, which provides a small boost to the object. For lightweight objects, such as small asteroids, spacecrafts and space-faring cars, this small boost is sometimes enough to move the object into a different orbit.

The Roadster's current trajectory will take it in an orbit that crosses Mars' path. At its greatest distance from Earth, the car will be 250 million miles away. Even for the most powerful telescopes, detecting something so tiny at such a great distance is impossible. In a matter of weeks, the Roadster will be too far away to detect.

The observations taken while the car is still visible may be the only ones astronomers will be able to get for a long time. It takes 18 months for the Roadster to cruise around the sun, so at this time next year the car will still be millions of miles away from Earth. It may be centuries before the car and Earth meet again.

As well as being scientifically valuable, the nights spent tracking the Roadster were special occasions.

"These observations were fun," Christensen said.

"It's not every day when we attempt to acquire an image of a cherry-red Tesla Roadster hurtling into outer space," Leonard said.

The Roadster is only 13 feet long — minuscule for an astronomical object — and at a distance of more than more than 2 million miles, telescopes cannot discern the details of the car.

"Although the recovery images show only a sequence of bright blips of light moving against a starry background, knowing what the object is was really quite thrilling, as this special launch and mission marks a milestone in human capability for space exploration," Leonard said.

"It's more than a gimmick," Christensen said. "It's a very significant cost-saving method."

The Catalina Sky Survey is funded by NASA and based at the UA's Lunar and Planetary Laboratory. The survey has discovered more than 8,000 near-Earth asteroids since 1998.