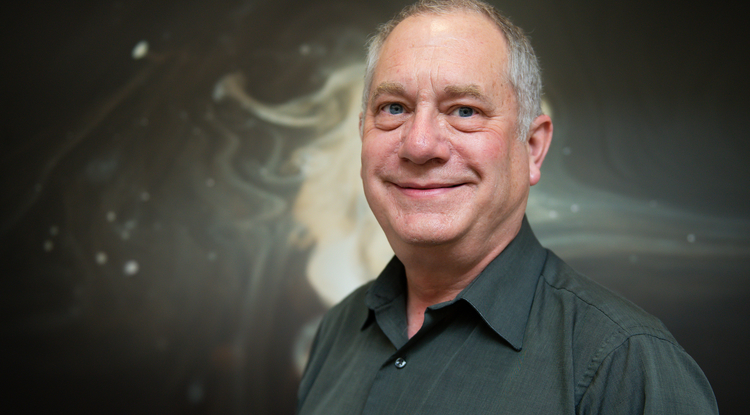 "I didn't realize until I moved to England what a desert rat I have become," says astronomy professor Robert C. Kennicutt Jr. (Photo courtesy of Texas A&M University College of Science)

The awards keep coming for Robert C. Kennicutt Jr., a globally renowned expert in observational extragalactic astronomy who was recently honored by both the National Academy of Sciences and the Royal Astronomical Society.
Daniel Stolte
,
University Communications
Jan. 28, 2019
Resources for the Media 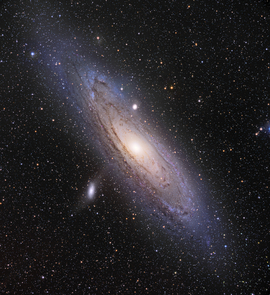 Astronomers had long been puzzled by how dramatically star formation rates vary from one galaxy to another. Kennicutt's work was instrumental in establishing a correlation between star formation rate and the density of cold gas in a given region. Shown here is the Andromeda galaxy, the nearest major galaxy to our Milky Way. (Photo: Adam Block/UA)

An astronomer whose discoveries helped explain how stars are born and plumb the depths of the cosmos more accurately is back at the University of Arizona because he "failed at retiring," as he puts it.

Robert C. Kennicutt Jr. first joined the UA Steward Observatory as an associate professor 30 years ago. In 2008, he was lured to the University of Cambridge, whose faculty roster has included Sir Isaac Newton and the late Stephen Hawking. In 2017, Kennicutt faced mandatory retirement as is common with universities in Europe, but he felt far from ready to trade his pencil for a fishing pole.

Both the UA and Texas A&M University offered Kennicut positions, so he agreed to splitting his academic year between the two. At Texas A&M, he is executive director of the George P. and Cynthia Woods Mitchell Institute for Fundamental Physics and Astronomy.

The UA stands out as a powerhouse of astronomy research, Kennicutt said, and not only because of its intersections between astronomy, planetary and optical sciences.

"The research done at the UA is second to none, but without the attitude," he says. "Our people are hard driving and hard-working, but they support each other. As one of the older members of the department, I want to keep that spirit going and help mentor the many brilliant younger people who have been hired in recent years."

An expert on star formation and galaxies, Kennicutt is looking forward to the launch of NASA's next generation space telescope, the James Webb Telescope, currently slated for March of 2021, which will offer views of the first galaxies to form in the nascent universe. His office is next door to those of UA faculty members Marcia and George Rieke, who both lead teams that develop instruments for the JWST.

Carving out time for research will not be easy, as Kennicutt was just appointed to co-chair the Astro 2020 Decadal Survey by national academies of sciences, engineering and medicine. The comprehensive study is performed by the academies every 10 years to help determine and prioritize the most important scientific and technological activities in astronomy and astrophysics for the next decade.

"We look at the progress that has been made, we talk about what the important research questions are, and we recommend programs for funding," Kennicutt explains. "The survey sets the top priorities for missions and projects over the next decade."

The Hubble Space Telescope owes its existence to previous decadal surveys, as do the ALMA radio telescope array, the NASA Great Observatories Program, and the Large Synoptic Survey Telescope, which will use a UA-produced primary mirror, currently under construction in Chile’s Atacama Desert. The Giant Magellan Telescope, which includes UA and Texas A&M as founding partners, and the Thirty Meter Telescope are jointly seeking a strong recommendation from Astro 2020 for support from the National Science Foundation in the coming decade. The UA's Richard F. Caris Mirror Lab is producing the primary mirror segments for the Giant Magellan Telescope.

Just last week, the National Academy of Sciences selected Kennicutt as the recipient of the 2019 NAS Award for Scientific Reviewing for his influential 1998 review paper, "Star Formation in Galaxies Along the Hubble Sequence." One of the most-cited papers in astrophysics, that publication "synthesized what was understood about how stars form in galaxies and set the course for future research," says Buell Jannuzi, who heads the UA's Department of Astronomy and Steward Observatory.

Kennicutt is also known for the Kennicutt–Schmidt law, which defines a relation between the gas density and star formation rate in a given region, and for his role in constraining the value of the Hubble constant, the unit of measurement that astronomers and astrophysicists use to describe the expansion of the universe. He served as co-leader of the scientific team that definitively measured the expansion of the universe, and he continues to research new methods to characterize the evolution of nearby and distant galaxies.

"We are thrilled to have this international leader back as a member of our community," Jannuzi said. "Not only is Rob one of our leading astrophysicists, but he is also a leader in planning for the future of our profession, in both Europe and North America."

Between facilitating suggestions from the scientific community per his role in the Decadal Survey and expanding – literally – his research focus from nearby galaxies to extremely distant ones once the JWST begins observing, Kennicutt looks forward to being a part of the UA community.

"Because I'm semi-retired if you will, my door is always open, and I can help the younger researchers with their teaching and the projects they are working on," he said. "Obviously, this university is attractive because of its many telescopes, but it really is the atmosphere that I enjoy most – high-powered, but collegial at the same time."