UA Biologist Offers a Solution to the 'Freeloaders Paradox' 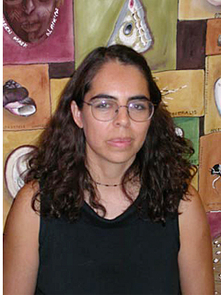 Freeloaders, it seems, show up everywhere in nature, not just at the company picnic.

Pine bark beetles, upon discovering a suitable tree to lay their eggs, emit a pheromone to muster thousands more beetles to the find. Most of the beetles that arrive collaborate to infect the tree with fungi that will kill it. A few freeloaders, though, may accept the airborne invitation without participating in the attack, instead lingering to lay their eggs in the tree which the others have invested their energies to prepare.

Leticia Avilés, an associate professor of ecology and evolutionary biology at the University of Arizona, thinks she has figured out how freeloaders get away with it without permanently spoiling things for everyone else.

Freeloadersindividuals that are eager to join social groups, but once in, tend to avoid pulling their fair share of the chores have long posed something of a problem for evolutionary biologists. An individual's gregarious and cooperative nature is governed to a high degree, like practically all life traits, by genes. Because freeloaders don't expend the efforts and energy of their more civic-minded neighbors, they should be able to translate that energy into more offspring, spreading their "slacker genes" and overrunning the world with offspring of similar ilk. But that, Avilés assures, should never happen.

Evolutionary biologists have pondered this "freeloaders paradox" for years. They've noted many ways by which communities deal with freeloaders. Naked mole rats, for example, police their groups. When the queen of a naked mole rat colony catches a lazy worker she gives him (or her) a shove back to work. Other groups impose punishments on freeloaders, or even exclude them from the community altogether.

Avilés contends however, in a report published this week in the Proceedings of the National Academy of Sciences, that such community measures aren't even necessary to prevent freeloaders from taking over. She found, instead, that the success of freeloaders is inevitably limited by their own social shortcomings. Freeloaders eventually harm the groups to which they belong by making them less productive. In the process, they bring about their own downfall.

Avilés used computer modeling to simulate, over thousands of generations, the way freeloading tendencies and the genes that control them would affect reproductive success and evolve through time. She put the genes into two classes: those that govern individuals' tendencies to join groups, and those that influence their cooperation within groups.

Tracking both of those traits together turned out to be key. Other scientists who previously attempted to solve the freeloaders paradox considered one or the other of these two factors. "This appears to be the first model for the evolution of sociality that considers both of these traits simultaneously," Avilés said. And it led to some unexpected findings.

At first, as intuition dictates, freeloaders do very well in the groups they join, says Avilés. They multiply, producing a greater number of offspring than the more cooperative members of their groups. In groups where freeloaders make up a small minority, their selfish ways go relatively unnoticed.

But as the freeloadersand their freeloading genesbecome more prevalent, social order in their groups steadily breaks down. The work doesn't get done, birthrates decline, and the group as a wholeboth the freeloaders and their cooperative neighborssuffers.

Meanwhile, other groups in the general population, which haven't been overtaken by freeloaders, enjoy a satisfactory living standard and high productivity. "Those groups will export a greater number of offspring to the global population, causing the overall frequency of freeloaders to decline," says Avilés. Gradually, social order is restored as the freeloaders are diluted back to minority statusuntil the cycle begins anew. The whole process continues forever, a constant ebb and flow of freeloaders and their genes in the population, but never to the point of complete elimination or take-over.

"This is a costly solution," Avilés points out. While freeloaders don't bring the downfall of entire populations, they do eventually cause upheaval within their local groups. Because of this, she says, "although complex mechanisms such as policing or punishment may not be necessary for the evolution of cooperation, they may still play a role in moderating conflict within the local groups."

Avilés thinks that the same processes that moderate the spread of freeloader genes may also apply to cultural evolution. "This doesn't have to be based on genetics," she says, pondering on the social dynamics of college homework groups.