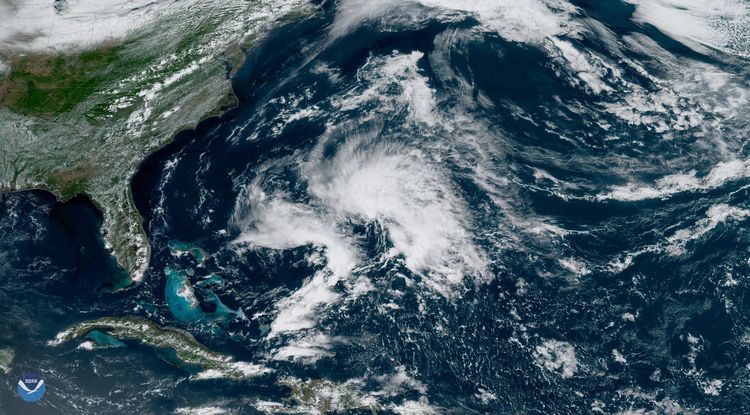 Subtropical Storm Andrea, which formed on the evening of May 20, is this year's first named storm. The UA forecasting model predicts a total of 16 named storms this year. (Image: NOAA)

The UA Hurricane Forecast predicts there will be eight hurricanes during this year's Atlantic hurricane season, which started on June 1.
Stacy Pigott
,
University Communications
June 14, 2019
Resources for the Media

Using a forecasting model that has proven to be extremely accurate over the last five years, University of Arizona researchers predict above-average hurricane activity for this year's Atlantic hurricane season, which officially began June 1 and runs through Nov. 30.

The UA's forecast predicts eight hurricanes, three of which will be major hurricanes, defined as those reaching Category 3, 4 or 5. For the first time this year, UA researchers are predicting the number of named storms at 16 including Subtropical Storm Andrea, which formed between the Bahamas and Bermuda on the evening of May 20.

The UA predictions are higher than those of the National Oceanic and Atmospheric Administration, which were released on May 23 and predict six hurricanes and three major hurricanes.

Xubin Zeng, director of the UA's Climate Dynamics and Hydrometeorology Center, professor of atmospheric sciences and the Agnes N. Haury Endowed Chair in Environment in the Department of Hydrology and Atmospheric Sciences at the UA, presented the UA forecast June 12 at the 47th Conference on Broadcast Meteorology in San Diego, California.

Zeng developed the UA's hurricane forecasting model with his former graduate student Kyle Davis through two papers published in 2015 and earlier this year.

"The Atlantic zonal pseudo-wind stress is actually the determining factor in making this an above-average year," Zeng and Davis wrote in their forecast. "The values for this season are quite similar to what they were in 2017, which was a very active year. The difference, however, is this year does not feature the very warm sea surface temperatures that 2017 had. Still, this factor increases our predictions."

The 2017 hurricane season was one of the most catastrophic in history, with estimated damages of nearly $300 billion. It was the seventh-most active hurricane season in the NOAA's historical records, which date back to 1851.