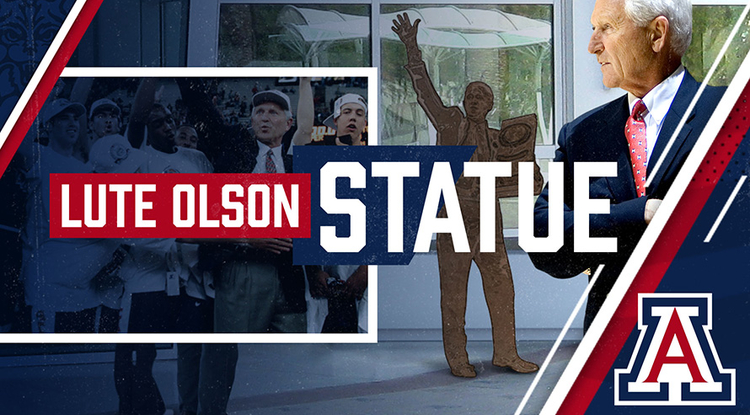 UA to Honor Lute Olson With Statue Outside McKale Center

The tribute to the Hall of Fame basketball coach, who won nearly 600 games in 24 seasons at Arizona, will be part of the 30th anniversary of the Wildcats' 1988 Final Four team.
Arizona Athletics
Aug. 30, 2017
Resources for the Media 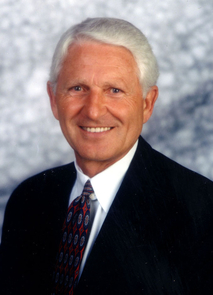 Arizona Athletics will honor Lute Olson for his significant contribution to the University of Arizona and the Tucson community by constructing a statue in his likeness, the UA's director of athletics, Dave Heeke, has announced.

The statue will be located north of the Jim Click Hall of Champions on the Eddie Lynch Athletics Pavilion Plaza. The statue project is estimated to cost about $300,000, and construction is expected to be completed in March 2018.

"We're thrilled to recognize Coach Olson, not just for what he accomplished on the basketball court, but for what he means to Arizona and our community," Heeke said. "Through the success of Arizona basketball, Lute helped introduce people around the country to our University and this city, and he forever changed the trajectory and perception of our athletics department. His legendary status is worthy of this honor, and we're proud that his statue will be visible to the thousands of people that visit McKale on a yearly basis."

Olson served as head coach of men's basketball at Arizona for 24 seasons and amassed a 589-187 (.759) record. He led the Wildcats to the 1997 national championship, four Final Four appearances, 23 consecutive NCAA Tournaments and 11 Pac-10 Conference titles, while earning Pac-10 Coach of the Year honors seven times. Olson also guided Arizona to 20 consecutive 20-win seasons, and, at the time of his retirement, was one of only three coaches in NCAA history to record 29 or more 20-win seasons. For all of his accomplishments, Olson was enshrined in the Naismith Memorial Basketball Hall of Fame in 2002.

"This is a wonderful honor and I'm grateful to the people at Arizona who made the decision to put up a statue," Olson said. "I was fortunate to have a successful career that spanned a number of different locations, but Tucson and the University of Arizona have become my home. I'm deeply touched at this recognition and I want to thank all of the staff members, student-athletes and fans who made, and continue to make, my life at Arizona something special."

The location of the statue was determined based on a number of factors. The Eddie Lynch Pavilion Plaza is connected with central campus and the UA Mall, which sees the greatest amount of the area's general traffic. That area also sees a large percentage of the basketball game-day traffic. The plaza also has sufficient room for the potential installation of additional statues. The south side of McKale was not considered because of potential arena expansion plans in the future.

The construction of the statue coincides with the 30th anniversary of the 1988 men's basketball team. The '88 team was the first in program history to qualify for the Final Four. The team also won Pac-10 regular-season and tournament championships en route to a 35-3 record. Because of this team's accomplishments, it seems fitting that the Olson statue will become a reality in a year of honoring the '88 team.

To assist with some of the project's cost, Steve Kerr, the current Golden State Warriors head coach and a prominent member of the 1988 team, is partnering with Original Retro Brand to sell Arizona Kerr replica jerseys and T-shirts. Kerr has agreed to donate his royalties from the replica-jersey sales to the Lute Olson Statue Fund. In addition, ORB founder and CEO Marc Herman has agreed to match Kerr's donation.

The Kerr T-shirts will be available exclusively at the McKale Center A-Store from Aug. 31 through Sept. 9 and on football game days at various merchandise tent locations. In addition, the online sale of the shirts will begin on Aug. 31 at BearDownShop.com, Originalretrobrand.com and UABookstore.com. The replica jerseys will be available on Sept. 20 in store and online. The collection also will be available at select Just Sports locations in Tucson and Phoenix after Oct. 15.

Because the donations from Kerr and Herman are expected to cover only a small portion of the cost, the bulk of the statue project will be supported through private donations, which can be made by clicking here.

As part of a continuing effort to recognize Olson and his accomplishments, he and his wife, Kelly, will be honored at halftime of the home football game against Utah on Sept. 22. Coincidentally, that is also Olson's 83rd birthday. For the statue's unveiling ceremony, tentatively scheduled for March, all former men's basketball letterwinners will be invited back to take part. Details will be shared as plans are finalized.