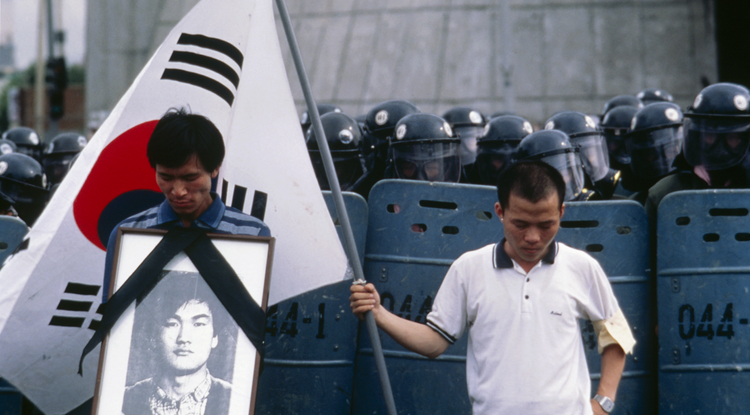 South Korean students hold a photograph of Lee Han-yeol, a student who was killed during the South Korean democracy movement in 1987. (Photo: Kim Newton)

UA Journ Professor Tapped for Film, Thanks to His 1987 Photo

Kim Newton will be presenting some of his photographs during a talk to be held March 28, 5:30-7:30 p.m. as part of an American Society of Media Photographers event at The Shanty, 401 E. Ninth St. The event is free and open to the public. 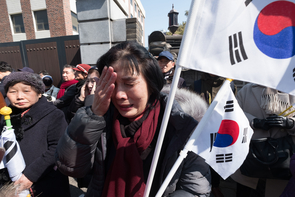 A photo Kim Newton took during the South Korean democracy movement in 1987 still resonates in that country — so much that the University of Arizona School of Journalism faculty member was invited to return to South Korea to be a presenter and participate in a documentary for the movement's 30th anniversary.

After he was contacted by Munhwa Broadcasting Corp., or MBC, the second-largest broadcast company in South Korea, Newton left for South Korea in early March. He was a freelance photojournalist based in Tokyo and Seoul from 1982 to 1990 for U.S. News & World Report, The New York Times, Forbes, Business Week, People, Time, Le Fiagaro and others. He went on to become a Reuters picture editor for Europe, Africa and the Middle East, based in London from 1992 to 1998, and senior photo editor for Knight Ridder/Tribune in Washington, D.C., from 1998 to 2002.

Newton, now an associate professor of practice in journalism, said the MBC producers were able to locate him through one of his U.S. News & World Report photos. In it, South Korean students hold a photograph of Lee Han-yeol, a student who was killed during the South Korean democracy movement in 1987. The movement led to the fall of the government and South Korea's first free democratic elections.

MBC producers are now documenting Newton's return to Seoul. It is his first time visiting since leaving in 1988. Newton said he would be "discussing my views and impressions as a foreign photojournalist during the 1987 student uprising and my impressions as they relate to today's democratic situation and impeachment of their current president."

Hundreds of thousands of South Koreans held protests in Seoul over the impeachment of President Park Geun-hye on corruption charges. On March 10, Park was removed from office after South Korea's Constitutional Court upheld a decision to impeach her. A presidential election has been scheduled for May 9.

While in South Korea, Newton was to accompany MBC producers to sites he photographed in Seoul in 1987, including many of the universities where students protested during the uprising, including Yonsei University, Seoul University and Ewa Woman's University.

In addition to Newton, the three-hour documentary plans to focus also on a riot policeman from 1987 and a student leader. The producers, Newton said, also plan to travel to Tucson to film him and use his photos from 1987 and his return trip to South Korea.