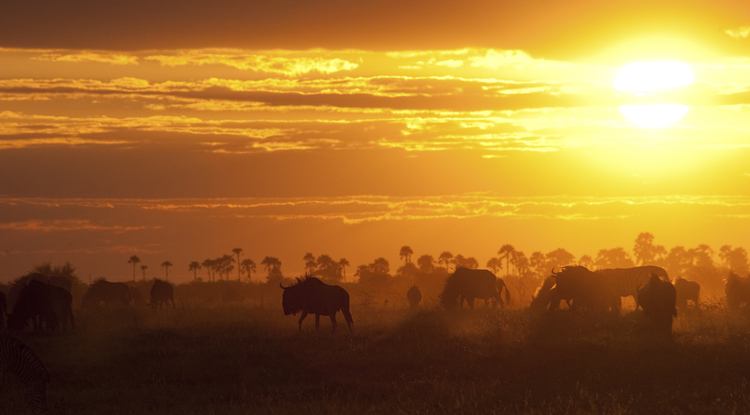 Driven by the concern that most land is under some form of human use or occupation, the scientists participating in SPARC want to take advantage of what they call the closing window of opportunity to influence the placement of future land purchases and conservation efforts. The photo shows a herd in Botswana at sunset. (Photo: Conservation International)

An international team of researchers is enlisting supercomputing to help better predict where plants and animals might end up under the effects of climate change. The project will model climate change-related shifts of species and ecosystems to suggest placement of protected areas for the future.
University Relations – Communications
July 14, 2016
Resources for the Media 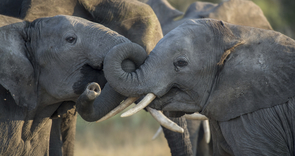 Elephants talking in the Okavango Delta, Botswana, Chitabe Camp (Photo: Conservation International)
The UA's Brian Enquist is an expert on plant diversity and does much of his research in tropical ecosystems. (Photo: Benjamin Blonder) 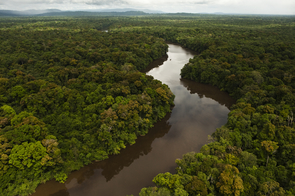 The Essequibo River, the longest river in Guyana and the largest river between the Orinoco and Amazon, rises in the Acarai Mountains near the Brazil-Guyana border and flows to the north for more than 600 miles through forest and savanna into the Atlantic Ocean. (Photo: Conservation International)

Brian Enquist, a professor in the University of Arizona's Department of Ecology and Evolutionary Biology, has joined an international team of scientists that will provide tropical countries with the information needed to avoid extinctions due to climate change.

The project, Spatial Planning for Protected Areas in Response to Climate Change, or SPARC, will use a big-data approach to plan for effective conservation in the coming decades by modeling the climate-change response of more than 100,000 species in tropical ecosystems on three continents. SPARC is funded by the Global Environment Facility, or GEF, a multinational fund that addresses global environmental problems, and managed by Conservation International, a non-governmental organization dedicated to protecting natural resources around the globe.

Recognizing that species and ecosystems move to track suitable climate, the research team will anticipate these movements by drawing on information contributed from scientists around the planet. SPARC will model the effect of climate change on rare tropical plant and animal species. This will allow governments, scientists and conservationists to identify regions and ecosystems that, if protected, preserve biodiversity and critical ecosystems. The goal is to build networks of protected areas that reduce extinctions due to climate change, at the same time delivering clean water, tourism opportunities and numerous other benefits to people.

"SPARC is the first project of its kind," Enquist said. "Until now, global-scale conservation prioritization has largely been driven by the  notion of biodiversity hot spots — small fractions of the globe that contain a disproportionately large percentage of  species — but  it has not generally considered past and future shifts of hot spots due to climate change, simply because forecasting ranges for hundreds of thousands of  species has not  been feasible. This project will change that."

Impacts from climate change already have caused movements of species and ecosystems, often crossing national borders or the boundaries of protected areas. The ranges of species are shifting in different ways, as each tracks its unique climatic tolerances. The long-term effects of such changes could lead to novel combinations of species and new land-use conflicts.

SPARC will employ big data to document and synthesize the impacts of these shifts using multiple state-of-the-art climate change models, datasets and planning methods. That information will be used to pinpoint locations for new protection that will safeguard both present and future locations of species.

As part of a recent $700,000 grant from the National Science Foundation, Enquist and his team at the UA will take advantage of CyVerse, the NSF's premier data-management platform for the life sciences headquartered at the UA's BIO5 Institute. CyVerse was launched in 2008 under its previous name, iPlant Collaborative, with a $50 million grant from the NSF to provide computational infrastructure for plant sciences. The project's early success led to a renewal grant in 2013, also worth $50 million, but with the expanded directive to serve all life sciences' data management needs.

"CyVerse enables us to use computational engines, cyberinfrastructure and supercomputing to scale up our ecological models so that we can forecast how individual species respond to climate change," Enquist said, "except we will do this for tens, if not hundreds, of thousands of species. For the first time, we will be able to see what climate change means for the distribution of species and the biome."

"Parks protect species from extinction — from loss of habitat and from climate change, if we put them in the right places," said Lee Hannah, a conservation ecologist and a senior researcher in climate change biology at Conservation International.

"It's no secret that tropical ecosystems are under increasing pressure from human activities and that opportunities for new protected areas are dwindling," added Patrick Roehrdanz, CI's managing scientist for SPARC. "The time to act is now to get protected areas in the right places to help prevent species extinctions in a changing climate."

Investments in conservation and their successful application are placed at risk by climate change. SPARC aims to close the gap between current areas set aside for conservation and the lands that will become necessary to protect in the near future. SPARC will assess the effects of climate change in the three highest diversity tropical regions: South America, Sub-Saharan Africa and Southeast Asia. This focused analysis will help inform the development and management of national protected area networks by providing critical information on the movement of key species. The regional perspective provides the basis for understanding what individual nations can do to protect biodiversity and what actions would require collaboration with neighboring countries.