The world's largest particle collider is expected to smash protons together at the highest energy ever achieved in the wee hours of Tuesday, March 30. The UA-Large Hadron Collider team members say the machine may reveal never-before-seen subatomic particles.
Mari N. Jensen
,
College of Science
March 29, 2010
Resources for the Media
Extra Info: 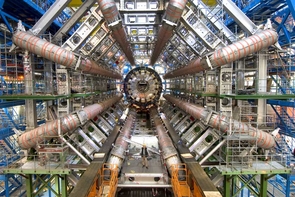 (Click to enlarge) A person stands in front of the huge ATLAS detector, one of six detectors that are part of the Large Hadron Collider near Geneva. (Credit: Maximilien Brice, CERN)

If the Large Hadron Collider successfully slams subatomic particles together in the early morning of March 30, it will make a group of University of Arizona physicists very happy.

The UA physicists who work on the world's biggest scientific experiment, the Large Hadron Collider or LHC, are eager for the machine to begin collisions at higher energy than ever before.

"It means an awful lot. This marks the beginning of the first serious physics run," said John Rutherfoord, a UA physics professor who has been working on the LHC for 16 years.

Experiments conducted using the LHC will provide fundamental discoveries about the matter that makes up our universe.

The LHC, the largest and most powerful particle accelerator ever built, will smash together beams of protons as they speed around a 17-mile tunnel beneath the border of France and Switzerland. When the protons collide, they will break apart and elementary particles, the smallest building blocks of matter, will shoot off in all directions.

The UA is the only university in Arizona involved with the LHC. The LHC is operated by the European Organization for Nuclear Research, known as CERN.

The machine is routinely zipping proton beams around the tunnel at 3.5 tera electron volts (TeV) – higher energies than achieved in any other particle collider. The collisions scheduled for the early morning of Tuesday, March 30 will be at 7 TeV – 3.5 TeV from each beam.

Once 7 TeV collisions have been established, CERN plans to run the machine at the 7 TeV energy level for 18-24 months, with a brief technical stop at the end of 2010.

Scientists expect that collisions within the LHC will create subatomic particles that no one has ever seen before.

One such particle is called the Higgs boson. Another is called a WIMP, or Weakly Interacting Massive Particle, Rutherfoord said. The existence of WIMPs is predicted by a theory called supersymmetry.

"A WIMP is one of the supersymmetric particles but is the only one that makes up the dark matter of the universe," he said.

"The LHC may actually produce the dark matter particle. That's the hope," said Cheu, a UA physics professor and associate dean of the UA College of Science. "That would be the first creation of dark matter by humans – and that will help us determine what it is."

To detect particles that might be the Higgs, dark matter or things as yet unnamed, the proton beams will be focused so the collisions happen inside one of the LHC's four main detectors.

The UA team had key roles in the design and building of two subsystems of the ATLAS detector, shorthand for A Toroidal LHC Apparatus. At 150 feet long, 82 feet in diameter and weighing more than 7,700 tons, ATLAS is the world's largest-volume particle physics detector ever built.

Other faculty members on the UA-LHC-ATLAS team are Michael Shupe and Kenneth Johns, both UA physics professors, and Erich Varnes, a UA associate professor of physics. The team also includes research scientists and engineers, postdoctoral and graduate students, technical and support staff. In addition, more than 20 UA undergraduates have worked on the UA's ATLAS team.

Rutherfoord, Shupe and other members of the UA's ATLAS team led the design, construction and installation of the Forward Calorimeter, an instrument that measures the position and the tremendous energies of the particles given off when the proton beams collide.

Cheu, Johns and others were responsible for instrumentation for ATLAS's Cathode Strip Chambers that detect the high-energy particles called muons.

Using the ATLAS detector, researchers will be able to measure the total number of particles and the energy produced in the collisions. The difference between the measured and produced energy is called the missing energy.

The missing energy will indicate that things like dark matter were created, Cheu said.

Shupe said that with earlier particle accelerators, some of the most interesting findings were not expected. He anticipates that unanticipated discoveries will also happen with the LHC.

The ATLAS Collaboration, like the other pieces of equipment that make up the LHC, involves thousands of scientists. ATLAS, one of the largest collaborative efforts ever attempted in the physical sciences, involves 2,900 scientists from 37 countries.