This impact occurred between December 2003 and November 2005. The main crater itself is only 23 meters across, but the impact event created markings spreading more than a kilometer outward. The interior stands out as blue because the impact excavated a cavity into rocks below the surface that has a different composition than the overlying dust. Some distant dark-toned spots and streaks were created when ejecta from the main crater flew out and re-impacted the surface, producing chains of secondary craters.

A new book invites the reader on a visual journey across the surface of Mars taken by the UA-led HiRISE project known as "the people's camera at Mars."
Daniel Stolte
,
University Communications
May 15, 2017
Resources for the Media
Extra Info:

For more highlights from the face of the Red Planet, visit this image gallery and the HiRISE website. 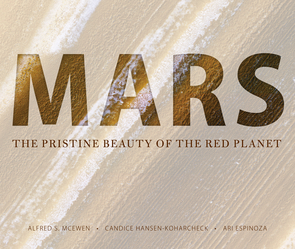 "Mars: The Pristine Beauty of the Red Planet," by Alfred McEwen, Candice Hansen-Koharcheck and Ari Espinoza, is published by UA Press and available at bookstores and online for $75.
The Descent of the Phoenix Lander (2008): A dramatic oblique view catches the Phoenix lander descending on its parachute, the first time that one spacecraft has photographed another before it has landed. Although it appears that Phoenix is descending into Heimdal Crater, it is actually about 20 kilometers in front and 13 kilometers above the surface.
NASA’s Mars Science Laboratory, Curiosity, was spotted by HiRISE as it descended to the surface on Aug. 5, 2012. Curiosity and its parachute are on the left, while above is a close-up, stretched to avoid saturation. The rover is landing on the etched plains just north of the sand dunes that fringe Aeolis Mons (informally called Mount Sharp) within Gale Crater. Details in the parachute such as the band gap at the edges and the central hole are clearly visible.

A gorgeous, sumptuous tome chock-full of stunning images taken by the most powerful camera ever sent to another planet now brings Mars to armchair explorers on Earth.

Weighing in at nearly eight pounds, "Mars: The Pristine Beauty of the Red Planet" features close to 200 carefully selected photographs taken by the University of Arizona-led HiRISE camera, which has been orbiting Mars on NASA's Mars Reconnaissance Orbiter since 2006.

Arranged into chapters that guide the reader/viewer from familiar features such as sand dunes to more alien landscapes one cannot glimpse on our own planet, the photos and accompanying captions amount to 425 pages compiled by UA HiRISE scientists. Published by UA Press, the book is available at bookstores and online.

In a sense, the volume represents a "best of" from the treasure trove of high-resolution images snapped by the HiRISE camera for more than a decade. Orbiting Mars anywhere from 125 to 186 miles above the surface, the HiRISE camera has revealed a Red Planet that is anything but dead — at least in geological and climatic terms.

"Throughout the lifetime of this mission, I had been saving favorite images that I thought were interesting," says Alfred McEwen, principal investigator of the HiRISE project and one of the book's authors. "We encouraged our roughly 50 team members who work with the images coming down from the spacecraft to submit their favorites to the project."

Ari Espinoza, outreach coordinator for HiRISE and a co-author of the book, recalls how the project started.

"Through our 'Beautiful Mars' project, volunteers around the world had already translated some of the image captions into 24 other languages," he says, "and with that in mind, I wrote the book proposal and pitched it to UA Press. Fortunately for us, the editorial board was excited about the project."

The result is a visual journey across the surface of Mars. With artistic glimpses at actively eroding slopes, impact craters, strange polar landscapes, avalanches and even spectacular pictures capturing the Phoenix Lander and the Curiosity Rover descending on their parachutes, the reader gets to see what researchers are seeing.

"The really difficult part was to cull the photo material down to a couple of hundred," McEwen says.

Co-author Candice Hansen-Koharcheck, senior scientist at the Planetary Science Institute and deputy principal investigator of HiRISE, adds: "In the end, there were many hard decisions to make when we saw how many images hadn't made the cut. There were so many we looked at and realized, 'No, this has to go back in.'"

In the spirit of "the people's camera at Mars," all images beamed back to Earth are published on the HiRISE website, but for the book, the authors optimized each image to bring out the best possible detail or highlight the most interesting features. Because the captions had been written by members of the entire team, McEwen and Hansen-Koharcheck rewrote each of them to ensure they read with one voice.

"Even though we had a big head start with a huge pool of pictures and their initial captions, putting this together for a dedicated book format still required a lot of work," Hansen-Koharcheck says, explaining that the material is presented in a way that resembles what geologists call stratigraphy: an assembly of rock layers deposited over time.

"Except that in the book, we go from top to bottom, or youngest to oldest, which is the opposite of how a geologist would normally do it," Hansen-Koharcheck says. "We realized that because our images have so much detail, you almost have to train people how to look at them."

And so, the visual journey of the Red Planet begins "with the features that are the most obvious and ubiquitous when you first look at the Martian surface — the sand dunes," Hansen-Koharcheck explains. "Then, we explore more recent features like fresh impact craters, all the way to the bedrock at the bottom of ancient craters. But you can't start there, it's just too foreign."

McEwen says the book covers just a sampling, a small selection of Mars' surface, by necessity.

"Mars has so many different landforms, so much diversity, that we can include just a sampling in this publication," he says. "Everything you see here is at HiRISE scale, so if you zoomed out, you could see large, iconic features like Olympus Mons, for example, but here all we see is a small detail of the volcano."

Since HiRISE began collecting data in 2006, the camera has acquired more than 50,000 images, each one a giant, gigapixel-size file. To date, HiRISE has covered just 2.83 percent of the Martian surface, and that is by design, according to McEwen.

"The goal of HiRISE was never to make an exhaustive survey of Mars," he says. "We are looking at such high resolution that this simply would not be possible. HiRISE was designed to focus on identifying the best landing sites and the most scientifically interesting locations."

Instead of systematically mapping Mars, the HiRISE scientists put time and effort on very specific targets.

"We study the Red Planet at a geologist's scale," McEwen says, "and we follow up with previously imaged sites, too. We are learning about the forces that shape Mars as we go, we are documenting what changes are happening today, and we try to gather clues as to what ancient Mars looked like by studying bedrock composition and structures."

Each day, the HiRISE camera makes 13 trips around Mars, and it is scheduled to continue to do so for the foreseeable future.

"Every day at the HiRISE operations center here at the UA, we send the commands to the spacecraft, and we process the data and interpret the images," McEwen says.