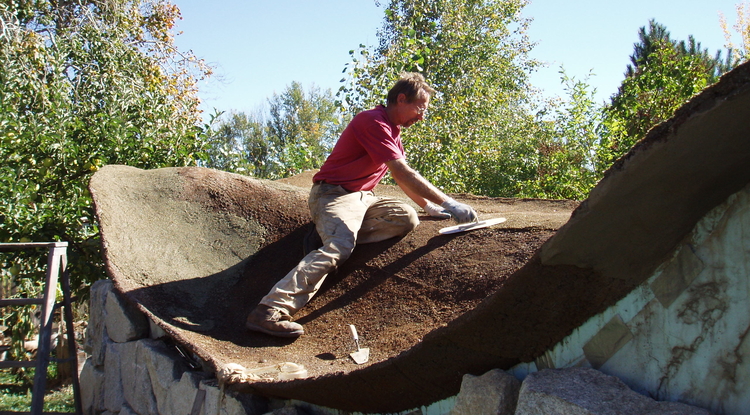 David Stone's Ferrock "represents an amazing engineering achievement that has the potential to create a great, positive impact on the environment,” says Doug Hockstad of Tech Launch Arizona.

Ferrock uses the waste steel dust from industrial processes to create a cementlike material that is sustainable and stronger than conventional cement.
Paul Tumarkin
,
Tech Launch Arizona
Nov. 12, 2014
Resources for the Media

When he was a Ph.D. student in the University of Arizona Department of Soil, Water, and Environmental Science, David Stone won a student innovation competition with the invention of an eco-friendly substitute for Portland cement.

The U.S. Patent and Trademark Office issued a patent for the UA invention in 2013, and today, in collaboration with Tech Launch Arizona, Stone has licensed the technology from the UA and is starting a company called Iron Shell to commercialize his invention.

The invention, called Ferrock, uses the waste steel dust from industrial processes to create a cement-like material that is sustainable, strong and environmentally superior to conventional cement. Cement is the binder in concrete, which also includes aggregate such as sand and gravel.

Along with turning a waste product that usually ends up in landfills into a useful product, Ferrock has another —perhaps even greater — environmental advantage. Annually, 4 billion metric tons of cement is made worldwide for use in concrete, and for every ton of cement manufactured, approximately one ton of carbon dioxide is released into the atmosphere.

Conversely, Ferrock hardens only when exposed to high concentrations of carbon dioxide, which is absorbed and trapped, making it a carbon negative material. This greenhouse gas diffuses into the wet mixture and reacts with the iron, creating iron carbonate and becoming part of the material’s mineral matrix.

Lab testing shows that Ferrock is significantly stronger than Portland cement in compressive strength and several times stronger in flexural strength, meaning it can take more stress before bending and breaking. It also has superior resistance to cracking. Because hardening is caused by the rusting of iron dust, it is well-suited for use in salt water and other environments that are too corrosive for regular cement.

"This all started from an accidental discovery in a lab, which is actually the way it usually goes," Stone says. "That was back in 2002, and I included as much as I knew in my doctoral dissertation.  But the work goes on. It has taken years to get just a basic understanding of the chemistry involved. But this shouldn’t be surprising, since scientists are still trying to figure out Portland cement and they’ve had 200 years.

"I am into this for the long haul. Time is on our side, since in this era of global warming unsustainable processes like cement manufacture will have to give way to greener alternatives."

"The technology stands to impact the world in a variety of ways," Hockstad says, "including both reduction of carbon dioxide production and sequestration of other carbon dioxide production, as well as recycling of waste products such as steel waste and in some cases, recycled glass. For all that, this represents an amazing engineering achievement that has the potential to create a great, positive impact on the environment.”

"Scientist inventors are not exactly known for their business skills, but (TLA) believed in me from the beginning and felt that I should play a central role in the commercialization effort," he says. "They then demonstrated this belief by giving my own startup the exclusive license to the patent and the right to sublicense. The terms were very generous and demonstrated that they think this commercialization effort will succeed. Beyond that, they have continuously aided my efforts to find business advisors, get the expertise I need and build a team."