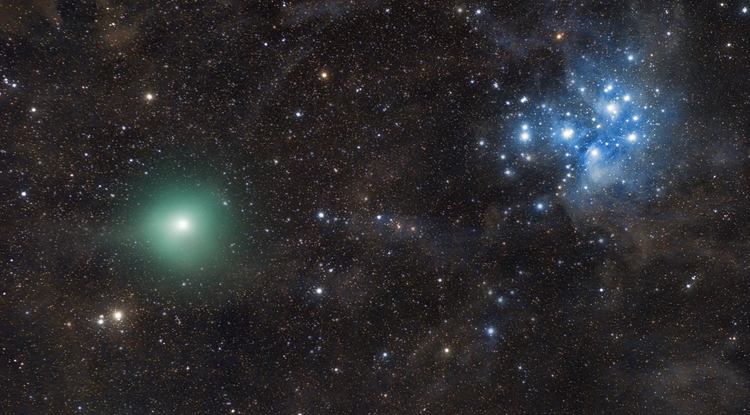 A UA-led team took the best known opportunity for the next 30 years to image a comet with radar, resulting in some unique and surprising information about Comet 46P/Wirtanen.
Erin Morton
,
UA Lunar and Planetary Laboratory
Dec. 20, 2018
Resources for the Media

This sequence of radar images of Comet 46P/Wirtanen from Dec. 15 shows apparent rotation of the nucleus in a counter-clockwise direction. The vertical axis is distance in the line-of-sight (15m/pixel) and the horizontal axis is in Doppler velocity from the comet’s rotation. The nucleus rotates once every 8.9 hours, determined from optical images. This movie covers 1.4 hours of the comet’s rotation. By combining images taken over several days, scientists can construct a shape model of the comet nucleus.

Although barely visible to the naked eye, Comet 46P/Wirtanen keeps some secrets so close that only radar can uncover them.

As the comet was making its close approach to Earth on Dec. 16, it was studied by a team of scientists led by Ellen Howell from the UA's Lunar and Planetary Laboratory. The team used Arecibo Observatory’s planetary radar, which is supported by NASA’s Near-Earth Object Observations program.

Studying the comet with radar provides a glimpse of its nucleus, the solid portion of the comet usually hidden inside a cloud of gas and dust that makes up the coma and tail. Radar images also allow for a precise determination of the comet’s orbit, allowing scientists to better predict how the gas and dust emission can alter the orbit.

Arecibo Observatory, a facility of the National Science Foundation operated by the University of Central Florida, is the only radar facility with the sensitivity to acquire images of Comet 46P/Wirtanen’s nucleus during its flyby. The Arecibo radar observations of Comet 46P/Wirtanen began Dec. 10 and continued through Dec. 18.

The radar images of the nucleus revealed an elongated, somewhat lumpy body that is much rougher than others that have been studied.

The new radar observations provided the first definitive measurements of Comet 46P/Wirtanen’s diameter, which is approximately 0.9 miles (1.4 km). Previous size estimates of the diameter were derived from the comet’s brightness, but radar provides a more direct  measurement.

Howell’s team, which included scientists from the University of Central Florida and the Lunar and Planetary Institute, was also able to observe the comet’s large-grain coma, which is only detectable to radar. They discovered that it contains a significant population of particles, defined as those just under an inch (2 cm) and larger. This coma skirt, seen in some but not all comets observed with radar, is very extensive and asymmetric in this active comet.

“Radar observations give us images of the comet nucleus we can’t get any other way. This comet has a really rugged looking surface, which might be related to the large population of grains in its coma,” said Howell, a senior research scientist at the Lunar and Planetary Laboratory. “Every comet we study is unique. Radar images are important pieces of the puzzle.”

Howell’s team was also able to find some surprising differences between this and other comets of the same family.

Although the three comets have similar orbits and activity levels, the radar observations show that they are actually quite different, especially with regard to the large grains in the coma. Comet 46P/Wirtanen has a large population of large grains, 45P/Honda-Mrkos-Pajdusakova has a smaller population of these grains, but 41P/Tuttle-Giacobini-Kresak had none.

Comet 46P/Wirtanen made its closest approach of Earth at about 7.2 million miles (11.6 million km), or 30 Earth-Moon distances, at a speed of over 22 thousand miles per hour (10 km/sec) relative to Earth. Howell’s team collaborated with a larger UA research group, headed by Lunar and Planetary Laboratory professor Walter Harris, to observe the comet at many different wavelengths during the pass to characterize the gas and dust emanating from the nucleus that forms the coma.

Comets are remnants of the planet-forming process, and are part of a group of objects made of water, ice and rocky material that formed beyond Neptune. The study of these objects gives us an idea of how our solar system formed and evolved over time.

This comet is only the eighth imaged using radar in the last 30 years, as comets rarely come close enough to the Earth to get detailed images. In fact, although 46P/Wirtanen has an orbital period of about 5.44 years, it rarely passes this close to Earth. The next close approach by Comet 46P/Wirtanen will be in 2029, but during that approach the comet will be 10 times farther away from the Earth than it is now.

This flyby was the best known opportunity to image a comet with radar for the next 30 years.