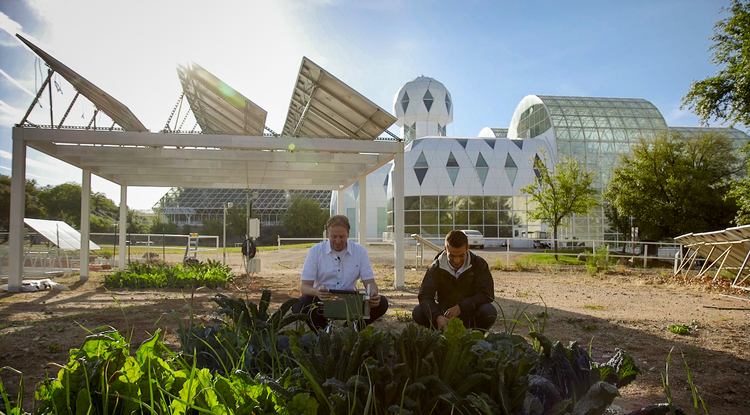 For more information on Biosphere 2 and the Earth Day celebration, visit http://www.biosphere2.org. A livestrem of the event will be available online: www.azpm.org/earthday.

Greg Barron-Gafford kneels amid chard, kale, cabbage and onions growing lush beneath a solar panel. An iPad in hand, he checks and records the plants' carbon dioxide uptake and the soil's moisture. He makes note of the plants' growth and appearance.

Barron-Gafford is a University of Arizona assistant professor specializing in biogeography and ecosystem science in the School of Geography and Development, and today he is working just outside the west entrance of Biosphere 2, located in the Sonoran desert. He's focusing on something known as agrivoltaics, a new way of "doing agriculture in the dry lands of the world," says Barron-Gafford.

This new way of doing agriculture that Barron-Gafford is focusing on involves growing plants beneath solar panels, an experiment in co-locating renewable energy with agriculture — in this case, positioning elevated solar panels over an understory of plants.

His quest for co-location started a year and a half ago, when Barron-Gafford and his colleagues set out to measure the environmental impact of renewable energy — specifically solar panels. He and his collaborators used a series of instruments that measured air temperature over the canopy of the ecosystem in the desert versus the temperatures under a solar array.

After a year of measurements, the researchers found that the solar array created a locally warmer environment than normal. "We call it a solar heat-island effect," says Barron-Gafford.

"It's much like the urban heat-island effect, where you've transformed the landscape to a built environment and it changes how sun energy moves through the system. It creates a net warming effect, especially at night," he says. "Even though we don't believe that the heat island extends too far beyond the solar panel arrays, we thought that we needed to dig into this problem and find out first what's the cause, and if there's something we can do about it."

Barron-Gafford suspected that the heat-island effect was being fueled by "transforming who is in this ecosystem." That is, in a normal environment, there would be a mix of soil and plants in the open air that would allow the air to circulate unencumbered. What's more, the plants would take up carbon for photosynthesis by opening up their pores, or stomata, while letting water escape from their leaves.

"They end up being little evaporative coolers on the landscape," says Barron-Gafford.

Barron-Gafford calibrates what he refers to as the Mini-Biosphere 2, a field unit that replicates the climate testing and control technology used in the Biosphere 2. (Photo: Bob Demers/UANews)

"So think about it, if you get rid of all the plants when you put in renewable energy, you've gotten rid of that cooling potential, and you get a warmer environment. We wanted to see if you put the cooling effect back into the system, you can actually cool those panels back down and mitigate that heat island effect."

When solar panels get too warm, they start to lose their energy efficiency. If they can be cooled down, though, they'll retain efficiency, which makes for more renewable energy per parcel of land.

In addition, the solar panels shade the plants, reducing evaporation of water, and, in turn, requiring less water to grow the same crops.

"We're co-locating the two and taking the benefits of each, hoping that there's an additive effect," says Barron-Gafford.

He says his next experiment will focus on trying to reduce water use even more by taking advantage of the shade gleaned from the solar panels. If we can reduce the water it takes to keep plants happy and productive, we're being smarter with the use of our water.

After that, he and his collaborators plan to take this system to rural Arizona and northern Mexico, where there's no reliable water or power.

"This is the ultimate goal of this work," says Barron-Gifford. "Part of it is making renewable energy better. Part of it is bringing a new dimension to community agriculture, but a big part of it is reaching into those rural landscape where a simple idea like growing your plants under solar panels can solve some important problems. This work truly is at the nexus of food, energy, and water science."