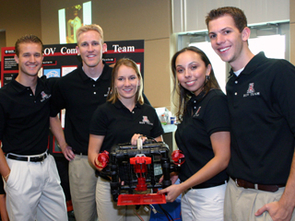 Five engineering seniors have built a remotely controlled submarine that's designed to take on hazardous missions. They will take the sub to a national competition for robotic submarines at UC Santa Barbara in June. The team members, all mechanical engineering seniors, are (from left) Allen Hutchinson, Troy Stevenson, Megan Neale, Stephanie Gauby, and Kevin Zingale. 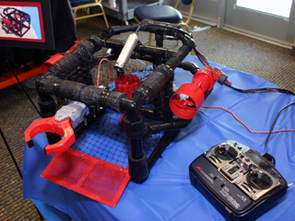 The robot submarine has two side-mounted motors that make it go forward and reverse. The motors run in opposite directions to make it turn. Since the sub was built to have neutral buoyancy, the vertical motor controls its depth. The robotic arm is used for grasping and retrieving objects.

Five UA engineering seniors have built a robotic submarine to tackle missions that are too hazardous for human divers.

They built the Remotely Operated Vehicle (ROV) for a competition that will be held June 25-27 at UC Santa Barbara. The event is sponsored by the Marine Advanced Technology Education Center, the Marine Technology Society's ROV Committee, and the National Marine Sanctuary Program.

The students will have 25 minutes to complete seven tasks during the competition. These include things like towing a 2-foot-long piece of 1/2-inch PVC pipe to the surface and using their ROV's video camera, which is equipped with a small light, to read the markings on a bell hidden in a darkened area.

The UA team used PVC pipe to build the ROV frame because the density of PVC is close to water. This makes it easy to trim the craft so that it is neutrally buoyant (weightless) underwater, said team member Kevin Zingale. The PVC frame is shaped like a large cube. The top pipes are sealed to trap air, while the bottom ones are drilled out, allowing them to fill with water. This makes the vehicle float upright.

Trapping air in the top pipes brought the ROV close to neutral buoyancy, meaning that it will not sink or rise when submerged. After the sub was completed, the students wrapped the top PVC pipes with a few pieces of foam to trim it to neutral buoyancy, Zingale explained.

The ROV has three electric motors  two mounted horizontally on opposite sides of the ROV and one mounted vertically in the middle. The horizontal motors control the sub's forward and reverse motion. By running these side motors in opposite directions, the students also can turn the sub. The vertically mounted motor is used to control the ROV's depth.

The students use a radio-control transmitter like those designed for RC model airplanes to control the ROV. Since radio signals don't propagate well in water, the transmitter is connected to the sub by a coaxial cable.

Using PVC pipe and the RC transmitter fit well with the team's goals of finding the easiest and most technically robust ways to build a sub that would meet the mission requirements. "There are a lot of complex ways to do things, but we wanted to find the simplest and most efficient ways," said team member Allen Hutchinson.

Four team members split up the design tasks, while Troy Stevenson served as project manager. Zingale was in charge of designing and building the structure, while Hutchinson worked on electronics and communications. Megan Neale and Stephanie Gauby designed the propulsion system, which includes the propellers, drive shafts, motor shrouds and waterproofing of the motor systems. Zingale and Neale also built the system for retrieving objects and bringing them to the surface.

The students, all mechanical engineering seniors, built the sub with a grant from Raytheon supplemented by their own funds. R.E. Darling also was a major sponsor of the project.