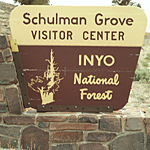 The Ancient Bristlecone Pine Forest is about an hour's drive from Bishop, Calif. 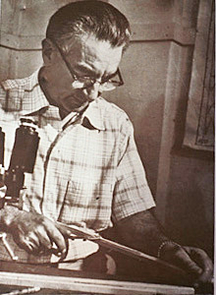 Fifty years ago, no one dreamed that trees could live for more than 4,000 years, much less as gnarled dwarfs high in parched desert mountains.

All that changed in 1953, when UA dendrochronologist Edmund Schulman decided to follow up a tip he'd gotten from an Inyo National Forest Ranger. After a field season in Idaho, Schulman detoured to scout out some unusual trees in central California's White Mountains.

Schulman had spent the previous 20 years tramping through Western mountains, searching for ancient trees. In the tradition of A.E. Douglass, who founded the UA Laboratory of Tree-Ring Research, Schulman was looking for climate-sensitive trees -- biological weather stations that had been silently collecting climate data for centuries. Douglass, who was Schulman's mentor, invented dendrochronology (literally, "tree recorded time") as a way to unlock the mysteries of ancient climates.

So in 1953 Schulman climbed to more than 11,000 feet in the White Mountains and sampled rings from the world's largest known bristlecone pine - the Patriarch Tree.

He counted rings going back 1,500 years. Several of the Patriarch's neighbors also dated in this range. To his added delight, Schulman discovered that these bent and battered survivors were better at recording climate data than were limber pines he had been studying in Idaho.

As the snow melted from the mountains and the 1954 and 1955 field seasons began, Schulman returned to hunt for still older bristlecones.

In the summer of 1957, Schulman and his assistant, "Spade" Cooley, discovered Pine Alpha and 16 other bristlecones that dated back at least 4,000 years. Nine of these grow in an area they dubbed Methuselah Walk, and include the world's oldest known living tree, the 5,000-year-old bristlecone they called Methuselah.

Schulman had plans for a comprehensive study of living trees and of wood from still-older dead ones and was looking forward to the 1958 field season. But in early 1958, at age 49, Schulman suffered a fatal heart attack.

In March 1958, National Geographic Magazine posthumously published the article he had written on his stunning discovery.

"The history preserved in annual layers of (bristlecone) growth should eventually give us a unique record of past climatic changes," Schulman wrote. Far more important, he added, is "the capacity of these trees to live so fantastically long, (they) mayserve as a guidepostto understanding longevity in general."