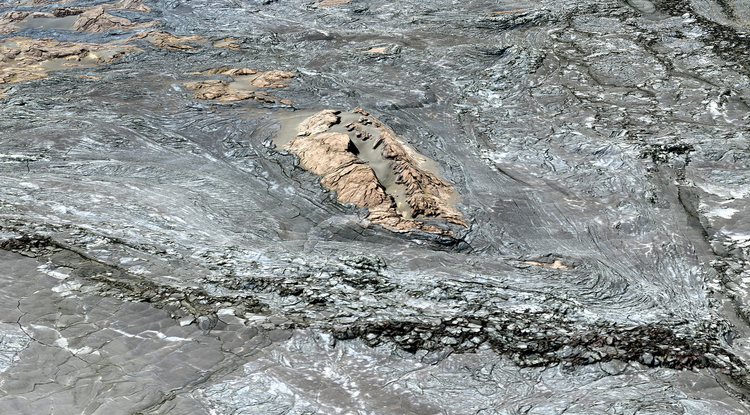 A perspective view of the December 1974 lava flow in Hawaii. This image is not a photograph, but rather it was constructed by draping kite-based aerial photography over a digital terrain model. (Image: Stephen Scheidt)

An unconventional research method allows for a new look at geologic features on Earth, revealing that some of the things we see on Mars and other planets may not be what they seem.
Daniel Stolte
,
University Relations – Communications
March 14, 2015
Resources for the Media 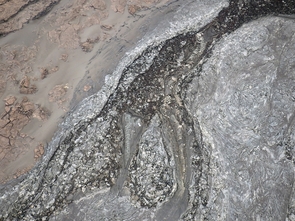 A kite-based image of sinuous channels within the December 1974 flow. These channels resemble those carved by water, but were formed by the flow of lava. Analogous channels occur on Mars. (Image: Stephen Scheidt) 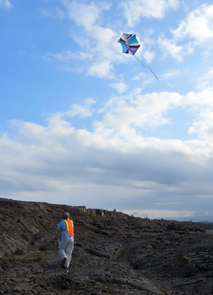 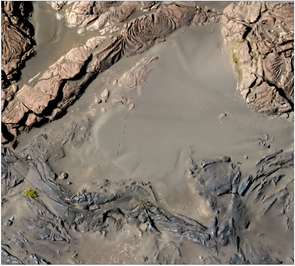 A high-resolution orthophoto of the margin of the December 1974 flow. If you look carefully, you can see footprints in the sand leading away from the edge of the lava flow. (Image: Stephen Scheidt) 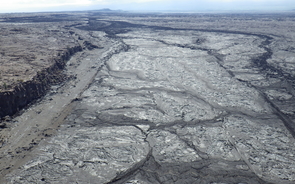 The kite’s perspective of the December 1974 flow showing the platy surface of the lava, “bathtub ring” and drain. (Image: Stephen Scheidt)

Scientists of the University of Arizona's Lunar and Planetary Laboratory have taken to kites that they fly above lava flows blanketing the Hawaiian landscape to unravel the past mysteries that shaped Mars.

A kite, equipped with off-the-shelf instruments such as a camera, a GPS and orientation sensors, scans the terrain from high above. The team then employs parallel computing and powerful software algorithms to assemble tens of thousands of images into extremely detailed and accurate 3-D digital terrain models.

In terms of studying volcanic landscapes, the project is unprecedented in its scope and in the quality of the data it produces, with a spatial resolution of approximately half an inch per pixel, according to the researchers. They presented their results and methodology this week at the 46th Lunar and Planetary Science Conference in The Woodlands, Texas.

The insights gained from these terrain models are used to inform interpretations of images of the surface of Mars, taken with the HiRISE camera aboard NASA’s Mars Reconnaissance Orbiter, which has been examining Mars with six instruments since 2006. Led by the UA, HiRISE stands for the High Resolution Imaging Science Experiment and has revealed never-before-seen details of the Martian surface.

"The idea is to understand places we can't go by analyzing places we can go," said Christopher Hamilton, the principal investigator of the research team, who joined LPL in 2014 to establish a terrestrial analog research group. Hamilton studies volcanic surfaces on Mars to understand the thermal history of the red planet — in other words, how the planet's internal processes manifest on the surface.

"We can use geologically young and vegetation-free surface features here on Earth — such as Hawaiian lava flows — as terrestrial analogs that can provide us with insights into processes that shape other planets," he added. "Instead of just saying, 'This feature looks like X,' we try to develop diagnostics that help us recognize the actual processes that led to the formation of a certain feature."

Hamilton's team chose the Kilauea volcano on the island of Hawaii as its study area, a "chemical desert" with several geologically very young lava flows, in particular the December 1974 flow, which poured out of the volcano on New Year's Eve 1974 in a short-lived eruption that is currently accessible by foot.

When the researchers compared images of the Martian surface taken by HiRISE, striking similarities appear.

"We think this is how the big lava flows formed on Mars, which strongly suggests they may not be what they seem," Hamilton said.

For example, many features that have been interpreted as channels carved by running water in the red planet's past are more likely to be the result of a volcanic process that Hamilton describes as a "fill-and-spill" lava emplacement, which developed when lava accumulated in enormous "perched ponds" that breached like an overtopped dam, giving way to catastrophic floods of lava.

"It is easy to draw conclusions based on our intuition of how water flows," Hamilton said, "so it is tempting to interpret similar features on Mars in the same way. But in fact these features formed by flowing lava, not water."

Pointing to the terrain model of the December 1974 flow, Hamilton said, "We see that in certain areas, the surface is broken up into plates and what superficially looks like channels carved by running water. However, these turn out to be not carved at all, but rather are the result of a complex pattern of lava movements within the flow."

Hamilton explained that liquid lava first filled the area between the cliffs from older lava flows like a big bathtub. When the perched lava pond breached, the lava surged forward, causing plates of cooled lava on the surface to break apart and fresh lava to well up from underneath. As the plates were floating toward the drain, they became crumpled.

The digital terrain models even revealed a "bathtub ring" formed when lava filled the pool.

"The question that drives us is: How can we assemble this kind of data for Mars landscapes and decide whether a feature is volcanic or fluvial — shaped by water — and allow us to develop a story?" Hamilton said. "A single surface texture doesn't tell you anything if you can't see the way in which the building blocks combine, such as the tiles that make up the pattern of a mosaic. The relationships between textures allow you where to look and what to look for."

Stephen Scheidt, a postdoctoral fellow at LPL who studies dune-building processes, designed and built the terrain-mapping kite system that was used for the project in Hawaii. To acquire the images, he launched a robotic camera attached to a delta-wing kite with an 11-foot wingspan into the wind and steered it by skillfully tugging on its tethering line. This involved spending days crisscrossing jagged lava formations on foot, trying not to be dragged around by the kite, all the while watching carefully to avoid toxic fumes wafting down from the volcanic vent.

"The kite is pretty stable in the air, and depending on the wind (it) swings from side to side only by five to 10 degrees or so," Scheidt said. "That small motion gives us enough parallax, or difference in viewing angle, to allow the software to calculate a three-dimensional terrain model."

Although the technique, called Multi-View Stereo-Photogrammetry, produces images that appear like aerial photographs taken from an airplane, they are not actually photographs. They are image mosaics projected onto digital terrain models, Hamilton explained.

"The kite takes an image every two seconds, producing up to tens of thousands of photos of a site," Scheidt said. "The software then removes any distortion and stitches those images together to create a virtual representation of the terrain that you would never have otherwise."

"Our approach shows how the combination of ground-based observations and an aerial perspective can help us to decipher the geologic history of Earth and Mars," Hamilton said.