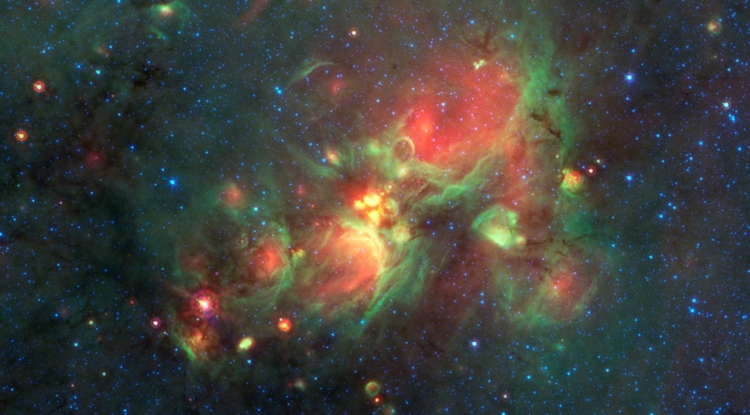 The yellow balls seen at the center of this image are a phase of massive star formation that comes before the massive stars have cleared cavities in the clouds of gas around them (shown in green) but after the cold, collapsing gas stage that Jenny Calahan and Yancy Shirley searched for in their survey. (Courtesy of NASA/JPL-Caltech)

In a unique study, University of Arizona astronomy students searched 101 clouds of gas to find those that may be in the first phases of forming massive stars.
Emily Walla
,
NASA Space Grant Intern, University Communications
July 25, 2018
Resources for the Media 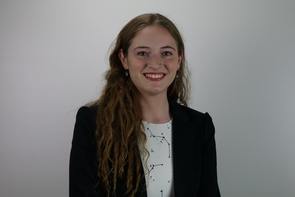 Jenny Calahan will begin graduate studies at the University of Michigan this fall. (Courtesy of Jenny Calahan) 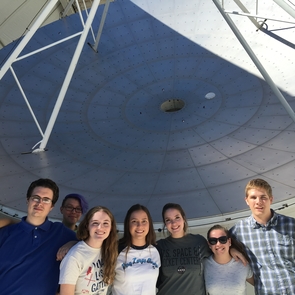 Calahan (third from left) and other UA undergraduate students pose in front of the dish of 12-meter radio telescope on Kitt Peak. (Photo: Yancy Shirley) 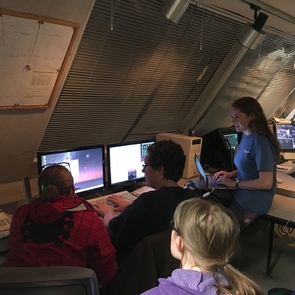 For three years, Jenny Calahan led fellow undergraduate students at the University of Arizona in research to help unravel the mystery of how the galaxy's most massive stars are born.

On July 23, just two months after Calahan graduated with a bachelor's degree in physics and astronomy, the resulting research paper, "Searching for Inflow Towards Massive Starless Clump Candidates Identified in the Bolocam Galactic Plane Survey,” was published in the Astrophysical Journal. Her co-authors include students who assisted with the survey and research.

"There's still a pretty open question in astronomy when it comes to massive star formation," Calahan said. "How do stars weighing more than eight solar masses form from clouds of dust and gas?"

Astronomers understand this process for stars the size of our sun. Particles in clouds are attracted to each other and begin to clump together. Gravity takes hold and the gases flow to the center of the cloud as it collapses. Over millions of years, the gas is put under so much pressure that it begins to burn, and the star is born when nuclear fusion finally begins in the core of the compressed gas.

Theories about how much gas and time it takes to make a star like our sun can be proven through observations, because each stage of a sun-like star's life — from the collapse of gas clouds into a pre-stellar core to the star's expansion into a red giant and collapse into a white dwarf — can be been seen throughout the galaxy.

But astronomers have yet to understand how stars more than eight times the mass of our sun form. Stars of this size explode into supernovae at the end of their lives, leaving behind black holes or neutron stars.

"There are a few theories for massive star formation that work in simulations, but we haven't seen those initial conditions out in the wild universe," Calahan said.

One theory is the formation of massive cores, says Yancy Shirley, associate professor in the UA's Department of Astronomy. The massive cores are dense collections of gas several times larger than the star they create. For massive stars, the cores must be at least 30 times the mass of our sun.

"People are having trouble finding objects like that," Shirley said.

The other theory is that multiple low-mass cores form within a gas clump. The low-mass cores grow as they compete for material in the clump, and eventually, one of the cores grows large enough to form a massive star.

"This is the debate: which of these two pictures is more correct, or is it some combination of the two?" Shirley said.

The first step in answering the question is identifying the earliest phase of star formation, so Calahan, under the advisement of Shirley, set out to find clumps showing signs of collapsing gas motion, called "inflow."

Calahan selected 101 subjects from a list of more than 2,000 huge, cold and seemingly starless clouds of gas called starless clump candidates, or SCCs.

Though astronomers have studied SCCs in the past, many of them focused on the brightest and most massive objects. Calahan's study was unique in that it was a blind survey.

Ranging in size from a few hundred times the mass of our sun to a few thousand solar masses, the SCCs Calahan selected are a representative sample of all gas clouds that have the potential to form massive stars.

Once Shirley and the undergraduate students he advises use the telescope to identify objects of special interest, like collapsing SCCs, the clumps of interest are then further studied using ALMA, which can peer deeper into the gas and find stars or other objects that cannot be seen with the 12-meter telescope.

By analyzing the wavelengths, Calahan identified six SCCs that showed the telltale signs of collapse, suggesting that gas collapse happens quickly, accounting for only 6 percent of the formation process of massive stars.

"The way we're using it right now is as a pathfinder," Shirley said. He and the undergraduate students he advises use the 12-meter telescope to conduct surveys that identify objects of special interest, like collapsing SCC's. These clumps of interest are then further studied using ALMA, which can peer deeper into the gas and find stars or other objects that cannot be seen with the 12-meter telescope.

Surveys take many dozens of hours to complete. Calahan and Shirley spent 19 weekends over the course of eight months to study the SCCs.

"I've now seen every part of this research," Calahan said. "I got to be part of asking the question, observing and doing the data reduction."

Groups of undergraduate students traveled with Calahan and Shirley to telescope, where they learned astronomical observation and data analysis techniques.

Shirley has served as adviser to several students who have published the research they did at UA, but Calahan is the first student of his whose paper was accepted before graduation.

"I don't think I could have done this at any other university," Calahan said. "We have the resources and the faculty to teach us how to reduce real-life data and observe on a real-life telescope. That's really unique to this institution."