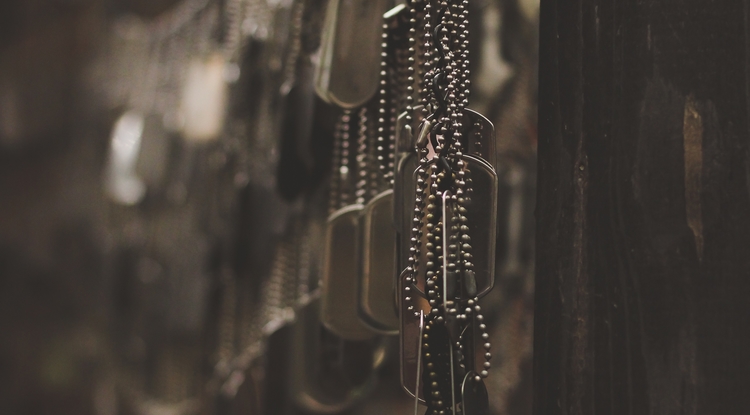 Since launching the TOP Legacy program that reunites veterans of the Vietnam War with dog tags they lost during service, the UA team has found two service members, one in Wisconsin and the other in California.
La Monica Everett-Haynes
,
University Communications
May 23, 2017
Resources for the Media
Extra Info:

The TOP Legacy program at the UA has received donations to aid in sustaining the program. Donations can be made via email to:

Also, the UA's Veterans Education and Transition Services is taking applications from students who would like to serve as guardians on an Honor Flight to Washington, D.C., which will occur Sept. 2-4. More information is available online at http://vets.arizona.edu/apply-serve-guardian-honor-flights-washington-dc​. 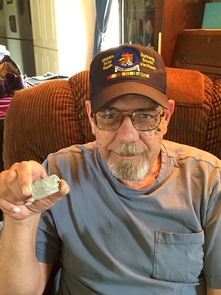 Thomas Lee Rhyner, a retired U.S. Air Force veteran, is the first to be reunited with his dog tag since the TOP Legacy program was launched at the UA.

The email from Thomas Lee Rhyner, a U.S. Air Force veteran in service during the Vietnam War, arrived on April 18.

Duan Copeland, a student veteran and graduate assistant in the University of Arizona's Veterans Education and Transition Services, was checking the office emails when Rhyner's message, timestamped at 12:55 p.m., appeared.

Unannounced but highly anticipated, the email marked the very moment that Copeland and others in the VETS center had worked toward since the summer of 2016. Rhyner was the first to respond to the team's call in an attempt to return about 2,300 lost dog tags to U.S. military veterans who fought in the Vietnam War, which ended more than 40 years ago.

The UA's VETS office inherited the dog tags from the TOP (Tours Of Peace) Vietnam Veterans, an independent nonprofit organization.

During the late 1990s, the TOP organization launched the Personal Effects and Dog Tag Program to authenticate and return dog tags that had been found in the aftermath of the war. Led by founding president and CEO Jess DeVaney, TOP was able to return more than 360 dog tags to veterans and their families before closing the program. Hopeful that the effort could continue, DeVaney handed the remaining personal effects — with files of information connected with each dog tag — over to the UA in 2016.

Copeland, who spent 12 years with the Army Reserves, said the UA VETS team worked to draft a sensitive and heartfelt response to Rhyner, aware that it could be a highly emotional moment for him. It was an emotional time for the team as well, he said.

"I was elated. We finally had a potential hit," said Copeland, who is leading the return effort at the UA. "It's been a long time for us, so to get a response from a letter we had sent was awesome."

Then, after verifying Rhyner's identity through discharge papers and other means, the VETS team mailed him the dog tag in a jewelry box with a certificate of appreciation — making Rhyner the first person to be reunited with his tag since the TOP Legacy program began at the UA.

Growing up in Wausau, Wisconsin, and having attended the University of Wisconsin, Stevens Point, Rhyner was not certain of his career path. But he was encouraged by his father, who had served during World War II. Retired and now residing in Schofield, a small town in Wisconsin with a population of less than 3,000, Rhyner said he considered it "my duty" to join the military.

"I never realized I had left a dog tag in Vietnam until I received an email from the University of Arizona," said Rhyner, also a retired Army service member, having spent more than 16 years with the Wisconsin National Guard. "I am very grateful to be reunited with my dog tag, as it brings back a lot of memories."

In his email to the VETS center, he wrote: "If in fact it is my dog tag, I would love to have it returned. Thank you for all that you do."

On May 22, Copeland and others at the UA attended a benefit dinner honoring DeVaney for his decades of service. DeVaney, an Arizona native, served in the Vietnam War as a rifleman with the Marine Corps. Before establishing TOP, he regularly made visits to Vietnam, where he began collecting dog tags.

DeVaney found the dog tags in different ships and in the earth where battles were fought, through researchers conducting excavations of soil and on roadways.

DeVaney had not yet heard the news of Rhyner. Copeland and Cody Nicholls, the UA's assistant dean of students for Military and Veteran Engagement, were able to inform him that the first veteran had been identified since the UA relaunched the search for Vietnam veterans.

Copeland said yet another veteran has since been identified through his son, Bryan Batts of Walnut Creek, California, who saw his father's name on the list of service members housed on the Veterans Education and Transition Services site. Batts' father, Charles W. Batts Jr., also lives in Walnut Creek and served in the Marine Corps.

"At the VETS center, we push the idea of service and have found that a lot of our students still want to serve in some way — in this case, to those who came before us," said Copeland, a UA graduate student studying applied biosciences and microbiology.

The announcement came days short of Memorial Day, the national holiday to honor those who died while serving in the U.S. military. Copeland said TOP members were able to verify that a number of dog tags belong to service members who have died.

Although more individuals on the list also probably have died, the work will continue.

"With each passing year, more Vietnam veterans are passing away," said Nicholls, a veteran of the Army Reserves and the Wyoming National Guard. "As we developed a better understanding and appreciation of the nature of the project, we thought we can continue the legacy of TOP in an effort to return the dog tags to the Vietnam veterans or their family members."

If nothing else, the return aids with closure, Copeland said.

"When we send these letters, who knows if these people are still alive. But this work is meaningful," Copeland said. "It's a way for our students and employees to connect with someone from the past to say, 'You are not forgotten. You are important.'"

In the care of the TOP team, the tags initially were authenticated by a number of methods, including the use of military documents, military database data, information generated from official memorials and personal identification documents.

The last letters TOP members sent out to try to identify Vietnam War veterans were mailed before the year 2000.

When the tags were handed over to the UA, the team began by sending an initial 40 letters to veterans using addresses TOP members were able to identify and others the UA has been able to find. This week, the UA team will send an additional 60 letters.

Since the handoff, a number of staff members, students and student veterans have worked on the project, hoping for connections.

In addition to Copeland and Nicholls, team members have included Anna Williams, who served as the initial project coordinator and now works for the UA's BIO5 Institute. The program originally was presented to the team by U.S. Sen. John McCain. Student team members have included Giselle Arenas, Dan Collins, Jacob Ellis and Stephanie Delgado. Seth Lewis and James Stout, now students at the Pima Medical Institute, also work with the team through a work study arrangement between the UA and the Department of Veteran Affairs.

As the team continues to match living and deceased service members with their dog tags, it hopes word of Rhyner's match will encourage other veterans and their family members to come forward.

"This has emboldened us to get more of these letters out sooner," Copeland said, adding that student workers will continue the project through the summer. "There is nothing stopping us from making progress."