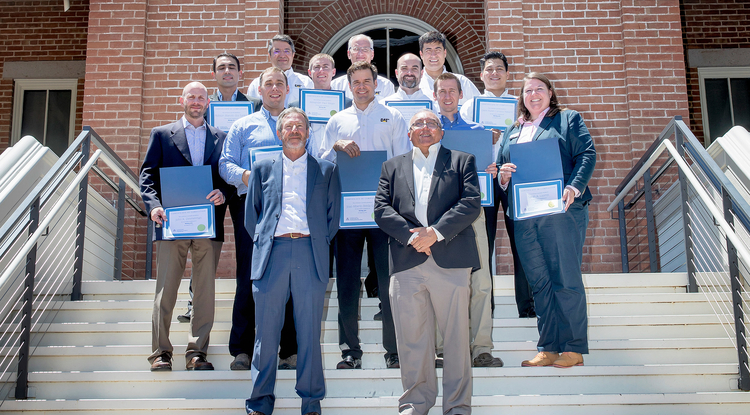 The Mining 360 Program has produced its first cohort of graduates, who benefited from executive training supplied by the UA Department of Mining and Geological Engineering.
University Communications
Aug. 9, 2017
Resources for the Media
Extra Info: 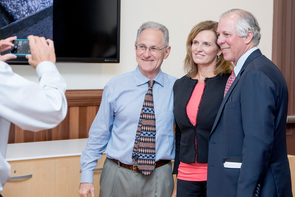 The first 12 professionals to complete a new executive training program at the University of Arizona have received their certificates, and a second cohort is on the way in only two weeks.

The inaugural class of the Mining 360 Program met on campus Wednesday to present its capstone projects and participate in an awards ceremony attended by UA President Robert C. Robbins, Tucson Mayor Jonathan Rothschild and Juan Ciscomani, senior adviser to Arizona Gov. Doug Ducey for regional and international affairs. The training program was unveiled last year by the UA and corporate partner Caterpillar, which has relocated its Surface Mining and Technology Division to Tucson from Illinois.

As part of the program, participants were taught online by 10 faculty members from the UA Department of Mining and Geological Engineering, or MGE. The professionals made use of Freeport-McMoRan's Morenci Mine in their capstone work. Four one-week trips to the Southwest were involved in their studies, which began last September.

"This is a very cool and innovative program," Robbins told the group at Old Main. "It's the kind of thing we seek to do in partnership with the city and industry. We hope this will be a two-way street, that we can learn from you as well. We're excited about you being here."

Zachary Carter, who works for Caterpillar in large mining truck marketing in Decatur, Illinois, said the experience was invaluable.

"Where we benefited was having the perspective of the customer's business," said Carter, who will move with his family to Tucson in a year. "It's a view we don't typically get. This way, we could understand all of the inputs into the bottom line and how we can help."

John Kemeny, chair of MGE, said there was plenty of learning on both sides.

"An executive program like this was new for us (in engineering)," Kemeny said. "It's beneficial to the University, these programs that are specific to industry. We can feed things back into our own undergraduate programs. It's a great experience for us."

The next cohort will have 15 students, according to Jean Savage, vice president of surface mining and technology for Caterpillar. The program was designed by Continuing and Professional Education at the UA in conjunction with MGE.

The UA "did this with such speed and agility, and that speaks well of your ability to work with employers," Savage said.

State and local officials previously estimated that Caterpillar's enhanced southern Arizona presence could have a $600 million impact on the local and regional economy.

Rothschild was quick to praise the UA's role.

"The asset is the University," the mayor said, "and the plus-factor is when it can say to a company, 'You tell us what you need, and we will teach it.' It's a good feeling that when a company comes to town, they can hit the ground running."