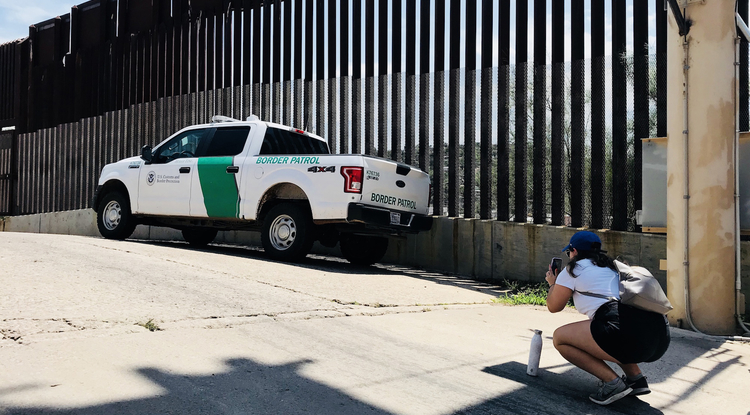 Olivia Jackson, a former journalism undergraduate student, documents the presence of the U.S. Border Patrol in Nogales, Arizona. A new master's degree in bilingual journalism aims to take advantage of the School of Journalism's proximity to the border. (Photo courtesy of Celeste González de Bustamante) 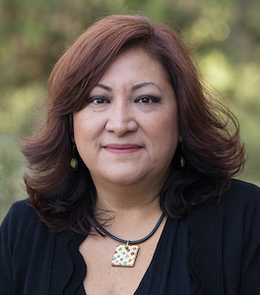 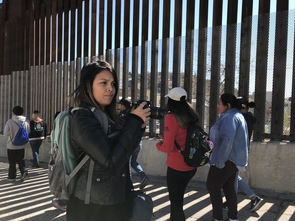 Carmen Valencia, a former journalism undergraduate student, gets ready to take a photograph during a tour of Ambos Nogales. (Photo courtesy of Celeste González de Bustamante) 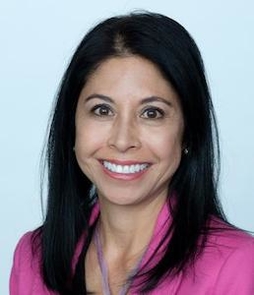 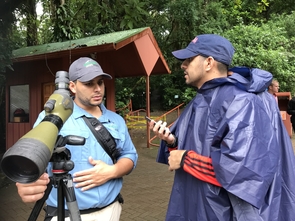 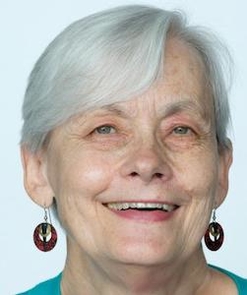 The effects of the news media's digital revolution can be seen clearly in news outlets that serve Latino communities.

Immigration has given those outlets increasingly transnational audiences of readers and viewers seeking information from both their new home countries and their countries of origin. As outlets have moved online, it has made it easier for readers to access, from just about anywhere, news from a specific city, country or region.

That's what Jessica Retis has found over years of researching Latino news and, before that, 20 years as a journalist in her native Peru, as well as Mexico and Spain.

It's also why Retis, an associate professor in the University of Arizona School of Journalism, led the development of the school's new Master of Arts in Bilingual Journalism, which will prepare journalists to cover complex issues affecting Latinx people in the U.S. and abroad. Latinx is a gender-neutral term for people of Latin American descent.

"It's important to understand the history, the economics, the politics, the culture of diverse groups," Retis said, stressing that "bilingual journalism" refers to much more than simply being able to ask questions in two different languages.

"Our program seeks to train journalists to understand these complexities."

The program will enroll its first students in the fall of 2021.

Though other universities offer Spanish-language journalism programs, the UArizona program sets itself apart by being fully bilingual. Lectures will be taught in either Spanish or English, and in many cases will move freely between the two languages. Students entering the program will be expected to be proficient in both English and Spanish.

The new program's core coursework includes four new classes that focus on how the Latino community is portrayed in the news media, how global migration of Latin Americans relates to the media, and how to use audio and video to cover issues affecting Latinx people.

The program will be offered by the School of Journalism in collaboration with the Center for Latin American Studies, the Department of Mexican American Studies and the Department of Spanish and Portuguese. It is designed for students who have a journalism background as well as those who have no previous journalism experience but hold a bachelor's degree from an accredited institution in the U.S. or abroad.

Students will also complete an internship at a bilingual media outlet or produce a bilingual multimedia project.

Thanks to its proximity to the U.S.-Mexico border, the School of Journalism is uniquely positioned to train journalists to cover Latino communities both in the U.S. and abroad – and has been doing it for years, said Celeste González de Bustamante, an associate professor in the school.

González de Bustamante, who directs the school's Center for Border and Global Journalism and covered the U.S.-Mexico border as a broadcast journalist for nearly two decades, has for years taken journalism students on reporting trips on both sides of the border and to other countries in Latin America.

She notes that the school in 1976 ran its first edition of El Independiente, a bilingual newspaper that covered underserved and underrepresented communities. Now an online magazine called El Inde, the publication comes out once a semester and covers a range of topics.

The school's other efforts to advance studies of the globalization and digitization of media include a new Bachelor of Arts and Master of Arts in studies of global media. Led by professor Jeannine Relly, these programs will be offered through Arizona Online beginning in spring 2021.

The programs will cover the range of ways information is spread via social and mainstream media, focusing on topics such as disinformation, information security, information literacy, freedom of expression and access to information – and how these are viewed in societies around the world.

School leaders have long seen the need for a bilingual journalism program but simply didn't have enough faculty who could build the curriculum and teach the courses, said Carol Schwalbe, the school's director. That changed last academic year when the school hired Retis and assistant professor of practice Ruxandra Guidi.

The program's goals are two-fold, Schwalbe said: to improve news coverage of Latino communities and issues, as well as attract international students to the school. Both goals, she added, contribute to the school's and university's dedication to diversity, equity and inclusion.

"Diversity has been important to the school since its early days," Schwalbe said. "This is one way, I hope, that we're able to contribute not only to the UA being an HSI – Hispanic-Serving Institution – but also to diversity in newsrooms."